We've been cycling for a week and with about 560 kms under our belts have completed over a third of the total distance. We the Atlantic coast tomorrow and the plan, providing the weather improves a bit, is to slow down and take a breather for a day or two before starting our journey up through France.

The cycling so far has lived up to we have not had good weather. France has been hit by a huge storm and measures are being taken to protect the world's greatest collections of art in Paris. Although the impact on our journey has not been as dramatic, two wet days have left me with a dreadful head cold and I'm feeling very sorry for myself (that's true, Ed).
Today's journey from Sauveterre de Guyenne to Bordeaux was, happily, particularly easy. This is a new stretch of the Deux Mers cycle route and follows old railway line through gently rolling countryside. The surface of pristine tarmac was perfect and there was even a tunnel which lit up as we rode through it, magic. It even had an official highway designation - the D803. The route was well used with lots of other cyclists, most of whom were significantly older than us and wearing which was no longer clinging in the way it was originally designed to.

Approaching Bordeaux I was finally forced to concede to Christine what has become obvious to me for a few days. The route I am following is based on a trip from west to east rather than east to west. This doesn't make any difference when you're running alongside a canal or following a railway it does have an impact in the towns. Constantly we find ourselves heading the wrong way up one-way streets or going against the traffic on a cycle way. Hopefully we'll be heading in the right direction when we start heading north along the coast but I wouldn't count on it. 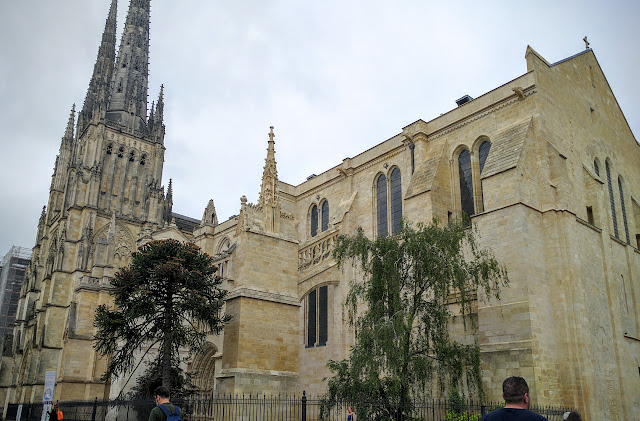 This is my first visit to Bordeaux and I'm impressed. The old stone-built core is huge with some monumental buildings, all well maintained giving an air of confidence and quiet prosperity. There are lots of interesting places to sit and people- today was too cold to hang about. There are also interesting modern confidence and lack of stuffiness. There were lots of idiosyncratic little shops and cafes and happily traffic was excluded from a sizable central area. Altogether a , as Christine points out, it has no 'edge'. 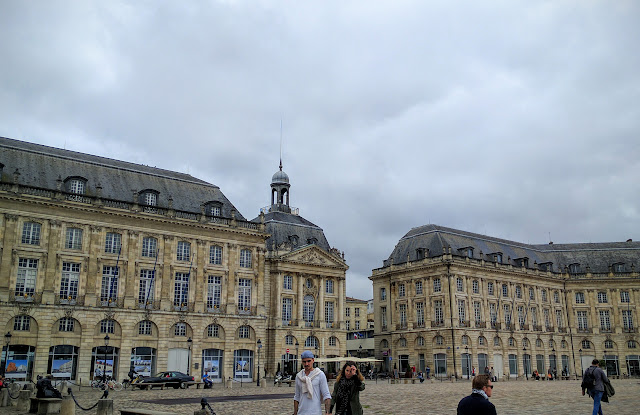 We visited a great cycle shop and replenished our stock of inner tubes (''). The young man there had a beard, straight out of Shoreditch, and we nearly bought a Schwalbe Marathon plus decided that was bolting the door after the horse had bolted. Christine's is now absolutely fine and I have to accept that two of yesterday's three punctures were down to my lack of technique rather than the . Will try harder next time.
Posted by John Hayes at 5:18 PM