GR 1 - Updates to the route description

As far as I can tell everyone who has set off along the GR1 armed with a little blue book containing my description of the route has somehow survived the experience.  Feedback suggests that, generally speaking, the sequence of events on the ground follows that described in the guide.  The route, however, is 1250kms long, things do change and occasionally my description of the route has left hikers scratching their heads.  Most hikers, following the recommendation in the guide, have used the GPS route (many using GPS for the first time) and the only real problems reported are from those attempting the route with just the guide.

The good news is that in a number of places the route has been improved.   For much of its length, the GR1 passes through wild countryside and although populated in the recent past, the people who originally used the footpaths and maintained the tracks that make up the route have long departed. Keeping it open and preventing it from becoming overgrown relies on the efforts of local volunteers and the occasional smidgen of public money. This blog is based on comments made by hikers who have used the guide in the first 2 years after publication, trips completed in 2016 and 2017.  As more changes are identified I will add to the list below.  Not every comment has been included as some are left for what will hopefully be a second edition of the guide.

The route does change and evolve.   When I did the research I was constantly finding contradictions between the information I had, usually derived from the regional walking  and what I found on the ground.  Routes are updated, new positioned, but the official information sources are not always kept up to date.  My golden rule was to follow the  on the ground and this rule, unless compelling evidence suggests otherwise, still applies. one thing and my guide says another, go with the .

From the top of the pass, the Collada  Mostagerosa, the route has been remarked.  Head down the valley side to a small stream and it by a cairn and then follow occasional to the valley floor below. 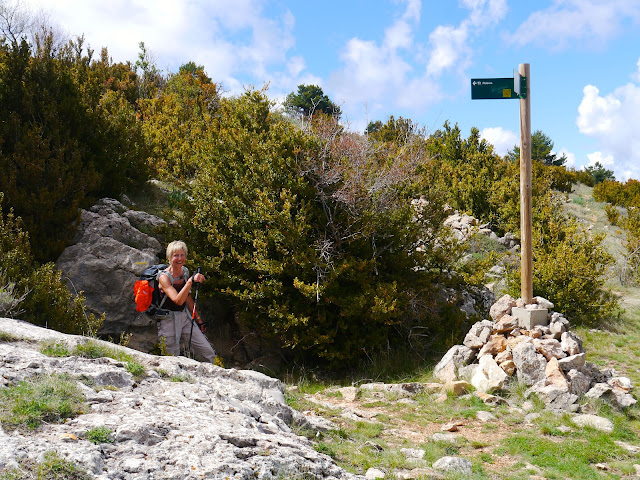 For a more extensive description of the shortcut to Brañosera

Cross the wire fence by the electricity pylon and follow a faint track used by vehicles.  Pick up a dirt road near the second pylon and descend, staying on the  above the stream.  After 1.5km down the valley, the road forks presenting alternative ways into Brañosera.  The left crosses a bridge over the stream and follows a zigzagging path down the hill (shortcuts may be possible).  The right fork follows a walking track (marked on the Spanish map as the Camino  Mata  Fraile) and then re-joins the main track after 700m, crosses the stream and after 1km reaches Brañosera.

The GR1 fades away the regional border into Cantabria is crossed.  My route is based on a local route, the Camino  Brañosera. This 'route' does go to but beware, compared to the GR1, it is in parts very poorly defined.

Some people found the little valley between and the chapel at Saint Bartolome wet and overgrown.  The path is indistinct and conditions will be dependant on the season.

Route description "From the bus stop" - should more correctly read "Just before the bus stop turn left onto a dirt road.  Shortly after turn and the main road".

Also the forest trail above the valley near Lagran has been damaged by recent logging and until restored it may be better to head to Lagran and follow the road to Bernedo.

The new hotel in the decaying village of Gallipienzo has been accompanied by some re - routing. Instead of going into the church yard, descend down clay steps to its left to a lookout and turn right.  Follow the cobbled streets downhill to a new road below the village. Turn right and follow the road around the hillside until it comes to a new hotel.  Below the hotel follow a footpath to the left and descend down a small valley to the bridge, keeping left at a junction.

The difficult to follow bit - mentioned on page 141 - has now been improved and the GR1 follows a well marked path.

A couple of people, who did not have a GPS struggled with the route on the hillside to the south of Bara. There are two dry stone walls, use the one on the right as a guide and follow it up the hillside until a cairn marks a more obvious route.

Bagüeste - the warning about Bagüeste can now be disregarded as new  provide a good route through the abandoned village.

For a more extensive description of the variant

‘Follow the farm road parallel with the cliffs through alpine meadows and agriculture. After 3km take a right fork and descend steeply on the road past spectacular, cliffs. The last 6km to Villanova is less there is a bar part way at Santa Maria where you can rehydrate.’

There has been some re-routing (no longer goes through the grounds of a private house) - so the end para could read:

‘Turn left and then north up the other side of the field to a small power station beside the river. Turn right across a small steel bridge, immediately right again and follow a forest path downstream to three houses. Turn sharp left and follow markers up the north side of the top property'

There has been some rerouting on the way into Sagàs - so second para on Section 7 Stage1 should read.

From the farmstead continue east for 500m. ‘Turn right at GR1 signpost, follow the road for 100 and turn left onto track. Descend, pass left of a reservoir and bear right at fork on dirt road. Turn left at the metalled road and enter Sagas.'

There has been some rerouting immediately before arriving at Lluçà and the GPS and the track on the ground are no longer consistent - as always follow the GR signs on the ground.

The 600m road walk referred to in the second paragraph on page 257 has been replaced with a path.

Extensive remarking on this stage.

There are a couple of misplaced photo descriptions as well - on page 49 the view is from the Collado Mostagerosa and church on page 96 is in Igay.