Cycling from Montpellier to Brighton - reflections on a journey

After cycling 1600 kms across France in 19 days the bikes have been cleaned, oiled and hidden. For a few days at least we've seen enough of them.

Maps, and routes on maps, are very attractive things. Earlier in the year when the days were short and the central heating was on full blast, the prospect of cycling on French vélo routes from the Mediterranean to the English Channel seemed like a brilliant idea. Having sampled the vélo routes on previous trips Christine and I felt ready for such an epic journey.

Cycling in France is brilliantly and vélo routes sit at the apex of a structure designed to encourage people to take holidays on bikes. Integrated with the Eurovelo network, which aims to promote long-distance cycling across Europe, the French network is perhaps the best developed component. If you enjoy traffic-free cycling and are happy to travel on fairly flat routes (often using canals and old railway lines), on surfaces that vary from tarmac to gravel, you should consider France.
My journey combined three vélo routes. We cycled east to west along the 'Canal des Deux Mers à vélo' - alongside the Canal du Midi and Canal du Garonne from the Mediterranean to the Atlantic. We then joined the Vélodysée and headed north along the coast La Rochelle, and then went inland northeast, over the Loire, then north up to the English Channel along a relatively new route, the Vélo Francette. 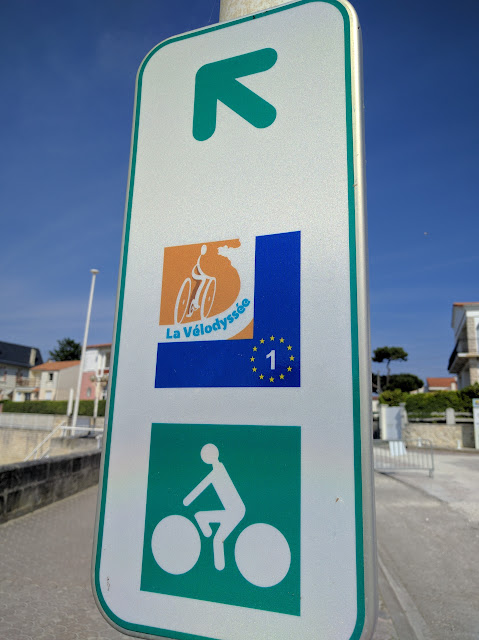 All the routes were well marked and nearly 100 percent complete. Where a stretch of is still to meet the very high vélo route standard it was marked with yellow signs as provisional. All of the routes are well described on the central website and GPS files can be downloaded for additional navigational security.
There was one important exception to this picture of perfection and that's the 200km stretch along the Canal du Midi from Adge to Donneville. Here the UNESCO conservation status of the Canal du Midi trumped vélo standards and the has been left in its unimproved state. Fortunately for travelled along when it was dry, and although bumpy it was passable.  Local roads provide a faster but less scenic alternative.

Not all the route was completely traffic free, but you would hardly notice what traffic there was. Compared to the UK, French roads seem very empty. Sometimes, to take a short cut, we chose a shorter alternative route which probably saw a couple of cars hour, compared to the official route which probably saw a car every day.
We only really started cycling three years ago and bought bikes that could switch seamlessly between gravel tow paths and roads. We have two almost identical Genesis Croix De Fer bikes (now part of the new 'adventure' class of bike) which are ideal for cycling in France (and the names and black paint job generate a lot admiring French interest). One of the things we ended up doing on this trip was to switch to Schwalbe Marathon plus tires, which, unlike their predecessors, so far have proved totally puncture resistant.

Our trip involved staying in hotels and, providing we knew that a hotel existed, either just turning up or booking a night in advance. There was some disagreement between my wife and I on which was the best I find roaming around a town at the end of a long cycle ride, trying to first find and then choose between hotels, a grim experience.
Judging by the loads carried by other people on the route a significant proportion of them were camping. Bikes with four or more panniers attached were common. We're obsessively lightweight and managed (barely) with one each. We wore the same gear we wear when cycling at home, and in full Lycra were perhaps a little sporty compared to our fellow travelers but hey if it works wear it.

Cycling from Montpellier to Brighton (not quite, please see the diary for details) was an epic adventure which went very close to . There were a few 'take outs' which others might want to think about before embarking on something similar.
does rain in France. To use my daughter's language, who is currently struggling with her own epic trip cycling from Sicily to Shoreditch, the weather so far this year has been . Wet and not so warm summers do seem to form part of a recent pattern and we found ourselves doing this journey when much of northern France was under water. Cycling in the rain is not nearly as nice as cycling in sunshine, but as well as ruining the views it made for more difficult cycling and slower surfaces than normal particularly where it had recently been flooded.

was a long way. I know that in a few weeks we'll feel good about the achievement (the self satisfied glow is already beginning to grow) but we found it tough, particularly when our combined age is approaching 130. Had the weather been better, had we been able to replace the anxiety about the next weather front with the anticipation of a relaxing picnic then I sure it would have felt easier. 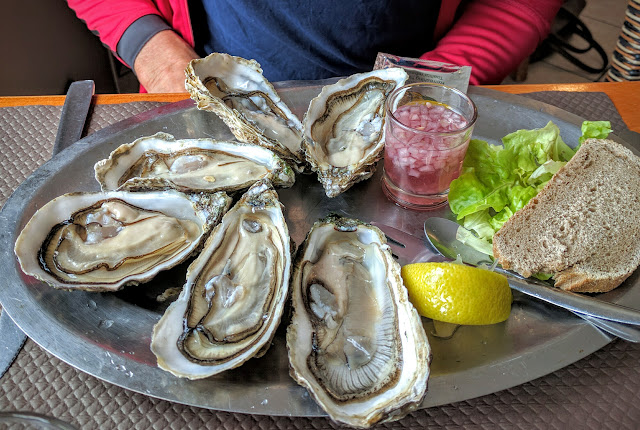 Thirdly finding decent French hotels and decent food is a challenge. Good restaurants and good hotels do exist, but finding them isn't easy and we did manage to find some which frankly were both expensive and poor. I'm afraid I'm old enough to remember when a trip to France was an exciting contrast with the food at home and when the symbol Logis meant quality but now neither of these things apply. Great food does exist, but if you've just arrived in a town on a bike finding it can be a lottery.
a big trip like this I think we should have mixed it up a bit more. We only had a maximum three we could have a longer stay in some of the big towns (Bordeaux in particular and La Rochelle) and mixed up the style of accommodation. In particular, it would have been nice to have stayed in a flat for a couple of nights and cooked our own food.
Linked to the last point there is a real tension on self cycling trips between the physical pleasure of cycling - blasting along through beautiful countryside - and the pleasure of travel, seeing new places and meeting new people. I suffer with this tension a little on my walking it's even worse when - ironically - when the route is a good as vélo routes often are. Quite often we spent minutes in a place where, from a traveling perspective, we could have spent days. 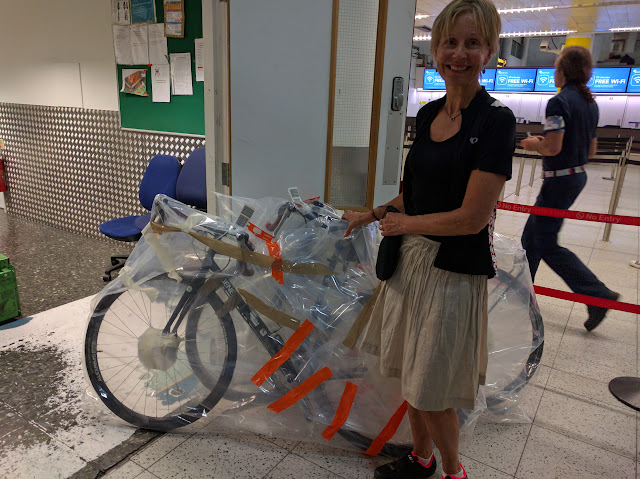 Fifthly and on a less carping note, taking the bike on a plane proved to be a breeze. It was the first time I had attempted this (using the CTC giant plastic bag approach) and it went very well. I went Easyjet (ignored the baggage handler guy's suggestion that I deflate my ) who interestingly had an item in their in-flight magazine about cycling holidays which suggests that cyclists with huge bags may not be the pariahs they think they are. Taking my bike on the plane is a huge step forward for me and means the world (or Europe at least) has suddenly become my oyster.

So yes, we will be packing our bikes up again in the not too distant future and exploring another part of Europe. Perhaps the difference next time is that, when the days are short, and the central heating is on full blast, we'll spend a bit more time planning the details.