To eat a sit-down lunch or not to eat lunch, that is the question.

I guess things must be going alright if the only point of contention is whether or not to eat lunch. The troub metabolism seems to work differently from Christine's. When she exercises s to eat food about every ten minutes and I don't.
We had a great lun it took nearly 2 hours and it feels like we've been eating nonstop since we arrived. Tomorrow we will tr' picnic'.
It rained heavily in the night and yesterday's chilly weather was replaced with bright sunshine and a gale for. The big dilemma was whether to follow the slow and meandering, but sheltered, canal tow path or take the faster but exposed route along the road. We ended up mixi despite the rough going the tow path was much more fun and ended up being easier too. 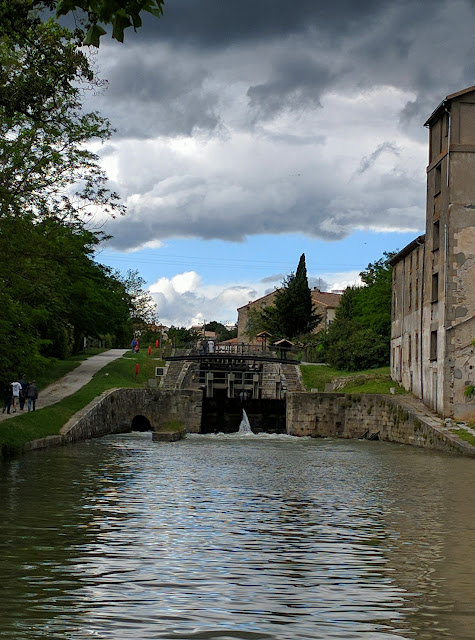 The farmsteads and the small towns along this stretch are particularly pretty. The old weathered stone built farm buildings are like ships in a sea of vineyards, and they reminded me of t we saw in Catalonia, farmsteads built on the foundations of Roman villas. You can imagine them housing a significant community of people working the land. The towns, built of san limestone, are tight and compact with the narr shade against the sun and church towers punctuating the skyline.
The canal itself is a constant source of interest. Standard built holiday cruisers bash their w direction and the 'crew', generally old and well fed, can be seen on deck consuming vast quantities of wine from early morning on. Great concern was generated by a traffic jam caused by a barge, almost as long as that canal was wide, attempting to turn round in what could only be a sixty point turn.
Hammering into Carcassonne just as it started to rain was the nicest part of the trip. The trees lining the canal, huge mature trees planted at regular spacings by enlightened 17th century canal designers, were particularly wonderful. Best of all the Google marker for the hotel was 1 accurate and, unlike yesterday, we got there in perfect order.

I've been to Carcassonne twice before and despite its attractions have never stayed more than a night here. There are actually two old towns, the famous citadel on the hill with its amazing walls, and the equally ancient walled town and 'port' below. below and although we walked to the bridge underneath the citadel that, after 6 hours in the saddle, was far enough for Christine.
Posted by John Hayes at 6:40 AM