80km, some in the right direction!

Today was the first full day on our Montpellier Brighton epic cycle ride: a great day, but with few learning points. 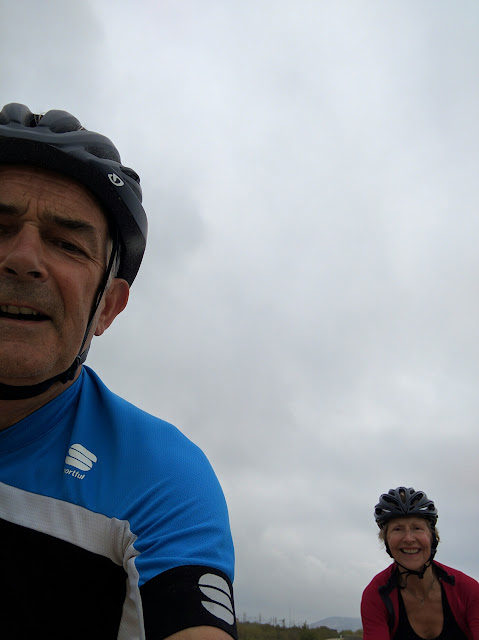 No 1 learning point, painfully learnt before but forgotten, is to make sure you know exactly where you're staying. Today's destination was marked on Google somehow we ended up in a field 2 miles west of Capestang. Either the marker was wrong or Christine moved it when she was trying to work out how far we had to go this morning (my theory!). Either way there was a lot of stress as we roamed around the outskirts of the town at 6 in the evening.
Secondly the French, unlike the Spanish, eat lunch early and bang on time. We arrived at the beautiful city of Beziers at about 1-45pm and the huge restaurants the splendid central square, where everyone was eating gorgeous looking food at pavement tables, were packed. It took us nearly as long to find somewhere to eat as it somewhere to sleep later on.
Thirdly the Canal du Midi cycle route is a mixed bag. Some of it is of designated French long distance route status with a good surface and well signed, and some of it is no more than a mud track with the mud baked to concrete like texture by the sun. The roads nearby are fairly by the end of the day we were cycling on them rather than the canal path.
Despite these small frustrations we had a really good first day. It wasn't warm enough for Christine to go for a swim in the Mediterranean just before Adge. She's been swimming in Brighton since April so when she said it was warm I took it with a pinch of salt.

After coffee in we joined the Canal du Midi proper and 'enjoyed' our first stretch of baked mud trail cycling. It was incredibly pretty, shaded by giant plane trees, but very slow. It was a relief when the route improved for a wonderful canal side run to Beziers.
Beziers, once we had climbed the hill to the historic , was great and it was annoying that we were too late for the best lunch.

Leaving the city along the famous bridge, where the Canal du Midi actually crosses above the River Orb, we continued west along another mud baked trail. A tunnel forced us away from the canal and we decided to follow quiet country roads to Capestang using the canal as a rough guide. The canal itself follows a contour on the side of the valley and takes a very indirect route. 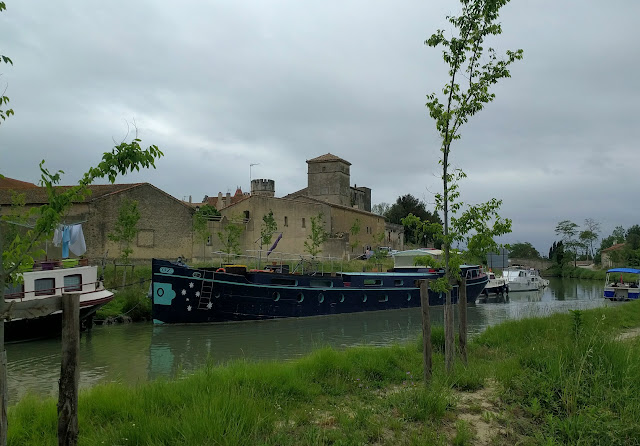 Roaming around Capestang's narrow and busy streets Christine didn't appreciate the close attention of the drivers and was already swearing at them when her chain came off and got stuck in her derailleur. 'Why French name' she asked when I suggested she move it a bit.
Of course we eventually found the d'hote and were soon fortified by a glass of local wine. Things got better still when we wandered the for dinner. There we ate a splendid meal and were entertained by some truly bizarre French festivities. A 30 strong group of men, dressed as Morris without the trousers, were following an extremely short man (about 4 foot 10) around the town square and in and out of the bars. As well as musical instruments 2 drums and a trumpet) they carried bellows filled with from time to time they stuck up each other's bottoms and gave a floury blast. I have no idea what any of this was meant to I'm sure it features in a Nigel Farage nightmare. It made great entertainment.
Posted by John Hayes at 7:41 AM