I'm not religious, far from it, but a religious upbringing has left mark. I have a sneaking suspicion that things catch up with you and a bad turn comes at a cost. Last night we booked a room in a small hotel in St Loup sur Thouet, it looked nice, good value and had great reviews. Today however we were moving quickly, got to St Loup early afternoon, and sailed on past. I felt very guilty and I can't help it, I blame all our subsequent problems on that . 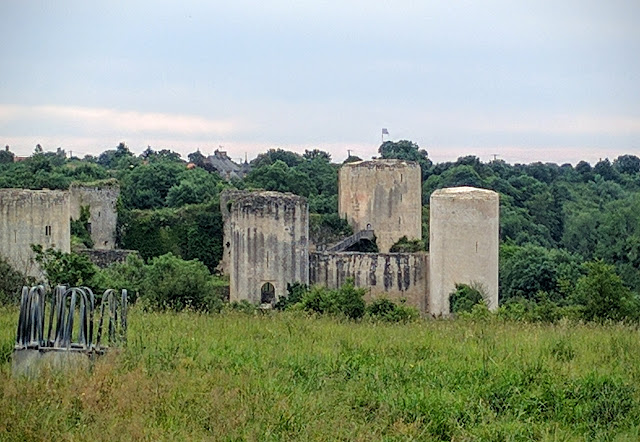 Today Christine was like a horse who can smell home. After being almost impossible to move yesterday she is now transformed. We still have hundreds of to Christine is determined to break records.

We left our very comfortable hotel in early and were on the road by 8. Compared to yesterday everything was different. It was cooler, it was hilly and we were cycling on roads. It was hard work but great fun with tough little climbs rewarded with long sweeping descents. Although loosely following a river north, water for on this French odyssey was not a significant feature of . Instead the dominating memory was empty country roads passing through gently undulating empty French countryside.
Our multiple stop strategy is now well developed. First stop for coffee, at the only bar in the village of Champdeniers, (lovely church) about 30km from Noirt. The baker there didn't do provided slabs of egg custard imaginable and a bargain at a euro a slab. 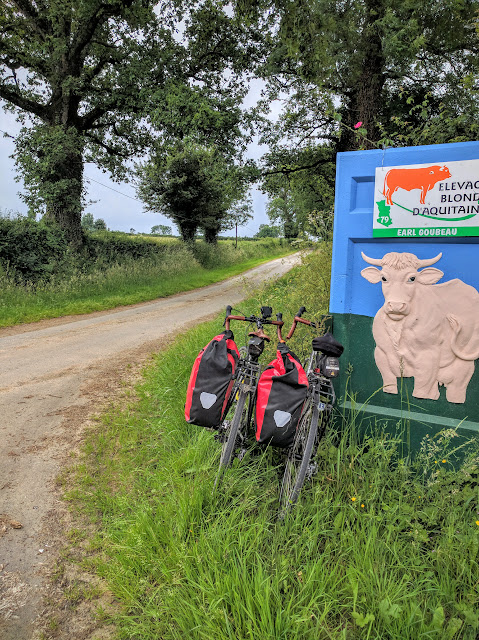 The slabs we about 15kms later, after yet more ascents and descents, right in front of a field of beautiful Blond Aquitaine cattle featuring the biggest bull I've ever seen. France more than any country in Europe is cow country.
Then, before we knew were in Partheney, the walled medieval town right in middle of the Duex-Sevres province, a stunning I'm afraid apart from picking up sandwiches and more cake, we weren't stopping to absorb this middle age masterpiece. 40 minutes later, and after 85 kms, we were at St Loup sur Thouet where I had planned to stop. It was still only 1-30 and super fast Christine insisted on pressing on.
From that point on things started to go wrong.

In the beautiful but weirdly named Airvault, the next town on the route, as the skies started to darken, we got totally lost as terrible signing convinced us we had picked a route back to Partheney.

At the next village, St Généroux, my front , the only out of 4 which isn't a marathon plus, went soft. In the convinced myself in a half-hearted way that this might not be a puncture, the and set off on the most direct way to Thouars.

The final 8 km approach to the town was along a very busy road, the rain was pouring down, and the huge lorries . As I rounded the final roundabout the problems I was having controlling my bike confirmed what I already knew, I'd got a puncture.

I'm getting quite speedy at replacing inner tubes, even in the rain, but the evidence was already beginning to us in the face, Thouars was a dump. Joan of Arc may have been that was a long time ago and her reputation didn't amount to a when it came to securing a place to stay. After consulting a very kind and sympathetic woman in tourist information we ended up cycling through a huge industrial estate, including a massive factory growing mushrooms, and staying in a grim soulless motel. Hopefully my sins have now been paid for and things will get better tomorrow.
Posted by John Hayes at 6:08 AM