Trekking in the Dolpo - High Camp

After yesterday's comment about the Nepalese and campsites, I have to report that the French seem to find them particularly exciting as well. As we disappeared into the quiet seclusion of our tent they got particularly noisy. Not only were they shouting and singing, they were actually 'dancing' around the campfire, going round and round it like a scene from some fifties western. Listening to other people enjoying themselves can be annoying but I'm afraid listening to the French, post Brexit, it was almost intolerable.

Meanwhile, our little group has actually has grown in size. We have been joined by a Nepalese student, a 17 year old trainee teacher, who has been down to Pokhara to take some exams. Having flown into Juphal she is half way along a 5 day walk back to her family who live in a village to the east of Shey Gumpa, a 10 day round trip which she has to do 5 times a year. BB, who describes her as 'Chinese' (Nepalese for Tibetan), has invited her to walk with us.
Today the route and weather continued to be excellent. This morning we walked north for another two hours underneath the beautiful Kanjirowa Himal before turning east and climbing up a dark and narrow gauge. Navigating the gorge involved numerous, often tricky river crossings and our new Nepalese student friend told us the route would have been impossible a month ago.

We ate lunch on a rare flat piece of ground about half way up the gorge. We sat on a tarpaulin sitting in full sun while our Nepalese crew, clearly not used to the sun, ate under the shade of a tree.
After lunch, we continued up the valley and overtook the French group who had stopped for lunch later than us. Gradually the trees disappeared and as we gained altitude the valley opened up. It was hot and hard work.
One of the French team had broken away from the main party and was making rapid inroads into our lead. We could see our campsite up the hill ahead of us and for some reason I took the prospect of being overtaken before we got there as an insult as to national pride. Christine didn't share my sentiment so it was left to me to go charging up to mountain side, plonk myself on the little canvas chair already positioned outside our tent, and triumphantly await the arrival of the French. 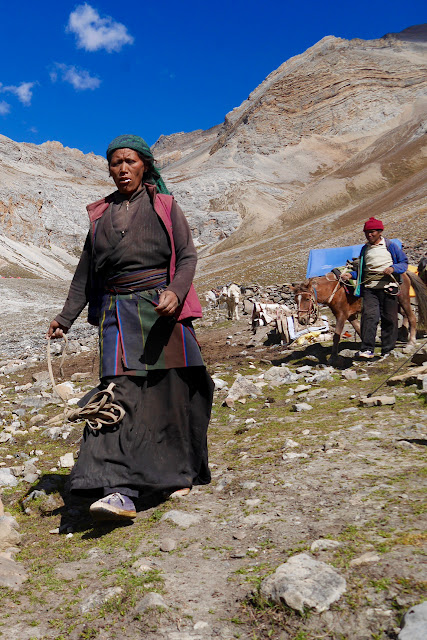 Our tent, it turned out, had been splendidly positioned in the middle of a yak motorway. A series of Yak caravans were heading down from the pass above us and the yaks, who are famously short-sighted, were passing with inches of our tent. Once we had got used to them stumbling into the guy ropes it was actually great fun although the close attention of one of the herdsman, who stuck his head in the tent, was a little disconcerting.
Today we had climbed nearly 1000m to the campsite, and the altitude (4700m), the sun and the race with the French, had an impact on my digestive system. A subject perhaps for a future blog but I'm afraid I don't find the food on these trips exactly appetising so tonight I left it to Christine to try and make an impact on the vast mountain of food presented to us. Mani the cook thought I might have food poisoning and would clearly have regarded this as a terrible personal failing on his part. It took some time to convince him that I just wasn't hungry.
Posted by John Hayes at 11:05 AM