Trekking the Dolpo - Underneath the Kanjirowa Himal

Today's walk took us along the northern side of the Phoksumdo Lake, over a 4000m saddle, then north up a flat-bottomed valley underneath the hanging glacier of the Kanjirowa Himal. It was a stunning walk and the first part, following a path carved into the vertical face of cliffs descending down to the lake, must be a candidate for any trekking bucket list. 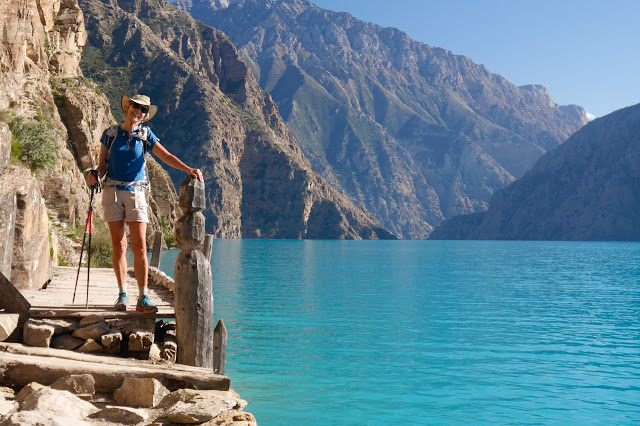 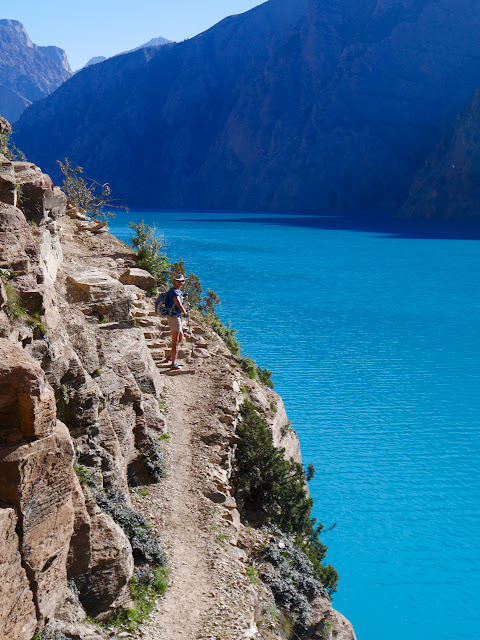 The lakeside path, and the route over the saddle, was clearly visible from yesterday's campsite and from the distance it looked particularly intimidating. It is described in detail in Peter Matthiessen's 'Snow Leopard' book and his description does nothing to calm the nerves.  It nothing like as bad Peter Mattiessen's description or how it looks from a distance and fully loaded yaks, despite precipitous drops, plod along it without hesitation.

Of course, the Yaks haven't seen Eric Valli's film 'Himalaya' which featured a Yak caravan walking the path and a Yak plunging to its death from the path. BB, with Summit Trekking, provided logistical support for the film and assured me that the featured Yak wasn't real and that no Yaks were hurt during the making of the film.

The walk was wonderful with constantly changing views of the lake and the mountains opposite. The literal highpoint, the prayer flag-bedecked top of the saddle, breezy in the late morning, was the perfect place to stop and take it all in.

Descending back down through flaky birch trees to the lakeside BB announced that this was a favourite spot for the shy but very beautiful red panda. We instantly went quite, dropped into stalking mode, anticipating its sudden appearance. What we needed, given the noisy French party just ahead of us, was an extrovert red panda but sadly we didn't get one.
After lunch, we turned north and headed up a beautiful valley. To the east, towering above us at 6600m, was a mountain ridge known as the Kanjirowa Himal. The mountains were top topped with fresh snow and huge hanging glaciers which in turn fed waterfalls. Beneath the crisp white glaciers where deep green near vertical meadows scattered with tiny black dots of grazing yaks.

Our campsite was in the forest. The team had been looking forward to this campsite and the to light a fire. Everyone in Nepal is a campfire expert and sitting in a tight circle getting gently toasted is I think the Nepalese idea of heaven. Officially the practice is banned in the national park but banning what seems to be considered a birthright will I suspect take some time to enforce.
Posted by John Hayes at 9:34 AM