Today's a rest day, a chance to recover from three days tough walking and to get acclimatised ahead of a 5000m pass in a couple of days time. We're camping on the side of the Phoksumdo Lake, the most beautiful place I've ever rested in, and it feels like a real privilege to be here.

We were chatting to one of the Russians we first met in Nepalgunj. He's in his early 50s and seems to spend his life trekking around the world (this is his 9th visit to Nepal). Like many trekkers, he was moaning about the loss of the 'real Nepal' and singing the praises of Bhutan where tourism is tightly controlled. It's a classic line of argument, made by trekkers about every remote place in the world, and one which I must admit I find a bit aggravating. He was, however, a very engaging man and not offended by Christine's unflattering reference to Putin on a horse.

His theory for the colour of the lake, the best I've heard so far is that it's derived from copper in the surrounding mountains. He had seen the super intense blue before in lakes in Siberia. Of course, the colour is totally natural but the association with Siberia and copper sulphate made me think of a chemical spillage.

As well as Russians (and the larger French group) our little lakeside community has trekkers from Spain (2 men), Belgium (1 man), Slovenia (a super fit couple), and a young couple carrying their own gear from Slovakia. What's interesting is that all the groups are small and apart from the Slovakian couple all have a full team of Nepalese support staff with ponies. If anything our team of 6 staff is modestly sized. 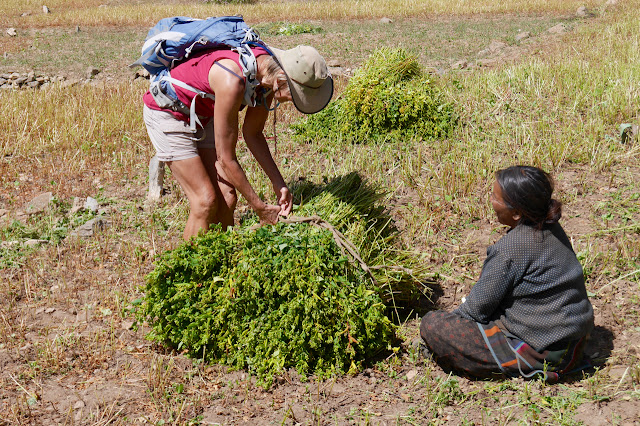 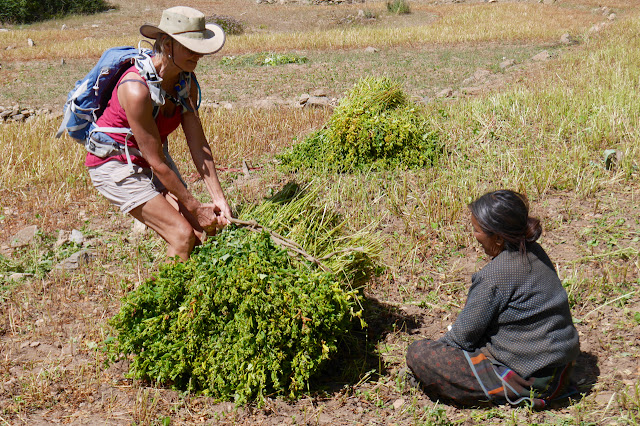 Also here, although he left this morning, was Peter Matthiessen's son. He father of course wrote the famous book 'The Snow Leopard', which describes his 1970s Dolpo journey and which has contributed much to the attraction of the area for subsequent visitors. Peter Matthiessen's son, Christopher I think his name is, was retracing part of his father's route but, complete with a large camera crew, came with a much bigger party.

One thing about having a 2 person group is that you do get to enjoy a closer relationship with your Nepalese support team. Our day start's with Norbin who wakes us up a 6 in the morning with 'morning tea'. Norbin's English is confined to events in the daily cycle: 'washing water', 'hot lemon', 'black tea' etc, and he gets totally lost if you try and engage him off track. I'm afraid his sing-song way of speaking is easily mimicked and we have started to talk to each other in Norbinese.

Mani is the cook and a very important guy. Very much a Sherpa in appearance, he's kind, good fun and very professional. He's done a lot of work with Jagged Globe and has cooked at Camp Two on Everest.

Along with Norbin, the other kitchen porter is Sheba, young, painfully shy, his looks would qualify him for a Nepalese boy band. His main job, apart from carrying 30 kg of the lumpy kitchen stuff (kerosene burners, dining table and chairs) is washing the pots and pans.

Bauber is the pony man and he knows everything about ponies and nothing about anything else. His super dark skin suggests a life spent in the outdoors and the sun. He is currently wearing open toe plastic sandals and it will be interesting to see if he persists with these as we get higher.

Dauber, BB's brother, works with Bauber and is the last to leave as the campsite is pulled apart and the first to arrive as it is reassembled. After the first-night tent malfunction, Dauber seemed a bit down in the dumps but seemed to recover his balance as the weather improved.
BB (short for a much longer Nepalese name) spends a lot of time with us and, with his imperfect English, it's hard work. Although we're much closer to the team than on any of my other Nepalese trips the language barrier is still pretty big. He is very gregarious, knows everyone on the route, and being able to chat with a local is a tangible mental release.

Today we washed clothes, dried sleeping bags and wandered round to the monastery on the southern side of the lake. In the afternoon we went into Ringmo and enjoyed some time with the locals harvesting fodder crops. We've been busy doing nothing and in such a beautiful place it's the only thing to do.
Posted by John Hayes at 12:08 PM