Trekking in the Dolpo - Ringmo

If yesterday was purgatory today was Shangri la. What a 24hr turnaround, our faith in Himalayan trekking has been restored and, encouraged by today's experience, we've started to fantasise about our next trip.

Today the weather was bright and crisp and the perfect light made the best of fabulous Himalayan scenery. Yesterday's tribulations were quickly forgotten and dumped in a box marked 'triviality'.

Sat on our blue canvass chairs either side of a heavy metal table, a table that had surely seen service in some ancient colonial war, we ate our breakfast in the shade. Sunlight however was quickly working its way down the side of the valley illuminating the mountain tops sprinkled with fresh snow. Still wearing heavy jackets we knew its arrival would bring an almost instant change in temperature from barely above freezing to requiring a T-shirt strip down.

The morning trail was superb. For hour or so after the campsite it navigated a gorge that was particularly narrow and the noise from the swollen and rapidly descending river made conversation difficult. The path itself was an engineering masterpiece and the effort needed to keep it open immense. It's constantly being undermined by the river and destroyed by landslides and each year great chunks have to be rebuilt from scratch and entirely by hand.
After passing a river junction, where a long suspension bridge takes an alternative trail west up the Jumla valley, we continued northeast towards the little village of Jharina. We'd been going too fast and having nearly caught up with the kitchen crew Bi Bi suggested we sit down and enjoy the sunshine and the views.

Getting to know Bi Bi a little he tells us that he lives with his wife and 9 year old son in Kathmandu. His wife runs a cafe and together they spend their money on their son's private education. He's worked for Summit Trekking for about 15 years, originally as a porter, and learnt his English entirely from clients. Before that, and after leaving the countryside, he worked abroad including two years in a factory in Malaysia.

He was in Kathmandu when the earthquake struck and provided us with a graphic description of what happened. He was on the street collecting water and his wife and son were in the flat. The actual quake lasted for just under a minute and of course it was chaos and intensely frightening. His wife, carrying their son, emerged from the flat a few minutes after the first shocks totally traumatised and it was weeks before they could go back there. Most of the population moved into the city's parks where Bi Bi's trekking experience really came into its own.
We shared our lunch spot with three Korean trekkers on a tour of the lower Dolpo. They were immaculately dressed and carried enormous cameras. My camera on the other hand had steamed up with the heat suddenly vaporising some moisture that had found it's way into its inner workings. Pressing the shutter button no longer necessarily produced the anticipated result. 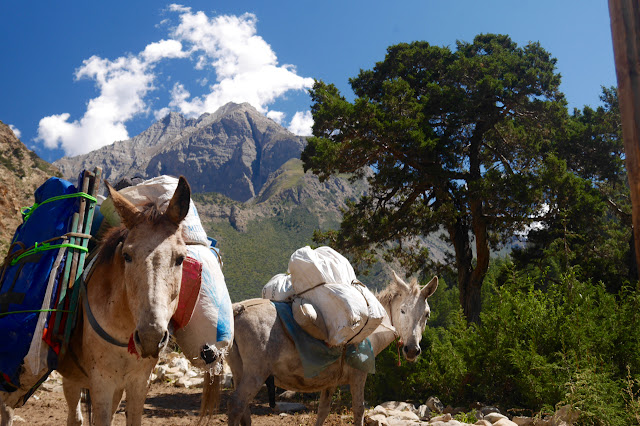 The afternoon's walk was much harder but just a rewarding. After crossing another long suspension bridge (shared with some cheeky local school children who seemed to be hiding from their teacher) we climbed gradually along a dusty path, past more winter quarters, up to a ridge. In the afternoon heat it was hard work. At the ridge a pretty wooden shelter provides the perfect spot from which to enjoy the views. To the northeast we get to see for the first time the amazing blue of the Phoksumdo Lake and closer, below the lake, a huge waterfall.


The little wooden structure is covered in the names of previous visitors and Christine adds ours. I read 'David and Victoria Beckham' and Bi Bi rushes over to share my discovery. He has a good sense of humour and his disappointment is short lived.
All the hard work now done it's an easy and pleasant walk to Ringmo. Ringmo feels quite substantial, chunky freestanding houses, with new tea houses under construction. At a bar we have a conversation with a couple of Americans who have been there several weeks repairing the town's little hydro electric plant. They point to a woman loaded down with kindling and tell us that she is 95 and the oldest woman in the village.
After leaving the village, climbing over a small hill, we are presented with the Phoksumdo Lake a quite amazing spectacle. Any lake in such a setting, huge near vertical mountains topped with snow, would be impressive but this lake is distinguished from any lake by its amazing turquoise colour. The contrast between the mountains and the lake, the lake a huge flat colour the edge of which is a sharp horizontal line and the mountains various shades of brown, grey and green, is simply unreal.
Posted by John Hayes at 8:29 AM