'To dare is to do' is of course the motto of the mighty Spurs but Christine's plan to go cycling around Herefordshire in March shows that it's close to her heart as well. Not one to worry about petty details (the weather and the hills) the discovery that there is a direct train from Brighton to the middle of the west country was a clincher. Well we got away with it. I suspect the cold, occasionally wet weather was about typical for the time of year but the cycling itself was great. The empty country lanes were a real revelation and, although it was hilly, it was pleasantly challenging rather than difficult. 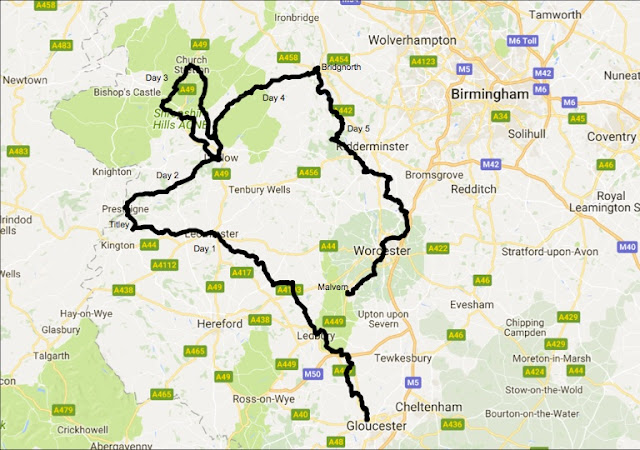 Since last year and our big trip across France we've both splashed out big time on new bikes. Our beloved Croix de Fers have been replaced by much lighter titanium bikes assembled in Brighton by Mike Reilly. Getting those steel bikes up three flights of stairs into our flat had become a real pain and given our go further plans for 2017 we persuaded ourselves that an upgrade was justified. We also dumped panniers and gone thoroughly modern with Apidura saddle bags. The west country trip was the perfect opportunity to test all this new gear and we are very pleased with the results.


We left our direct GWR train from Brighton in Gloucester and after exploring the cathedral and the redeveloped docks, found the Gloucester brewery, met the brewer and sampled the produce of his labours. The beer was brilliant and set the tone for rest of week. Local produce and quality food and drink is what this region is all about and if you've spent all day on a bike, indulgence is met with a clear conscience.


Next day we cycled to Titley, home to The Stagg, a gastropub with a huge reputation. On the way we visited Ledbury and Leominster and found places to fuel up although on a slightly damp Sunday afternoon Leominster felt very neglected. I'm not sure if I trust my GPS but it claimed we clocked up 900m of climb on our 90km journey and although it was hilly between Ledbury and Leominster it wasn't difficult. The countryside, even in March, was very attractive with flowers in the hedgerows and new born lambs in the fields. The half-timbered houses reminded us of villages in Normandy.

The Stagg more than lived up to its reputation. On arrival we grabbed a pint and, after being dragged into a local's 60th birthday party, ended up drinking several more. An excellent first day.

Next day we had to wait until early afternoon for the rain to stop. Although the trip to Ludlow was only 32kms it was a tough one with two big hills. The route again was almost traffic free with as many horses as cars and despite the cold weather the cycling was a joy.

We stayed in Ludlow for three nights. The town is a lovely place but is no longer the gastronomic centre it once was as Michelin starred restauranteurs have either moved to London or retired. Three nights might have been too much but it turned out for the best as the weather meant we stayed holed up for one of our two days there.

The Church Stretton, Craven Arms circular was brilliant. 60 kms, 800ms of climb and two refueling stops. As well as some stunning scenery and more empty country lanes we enjoyed both bright spring sunshine and freezing but thankfully brief snowshowers. 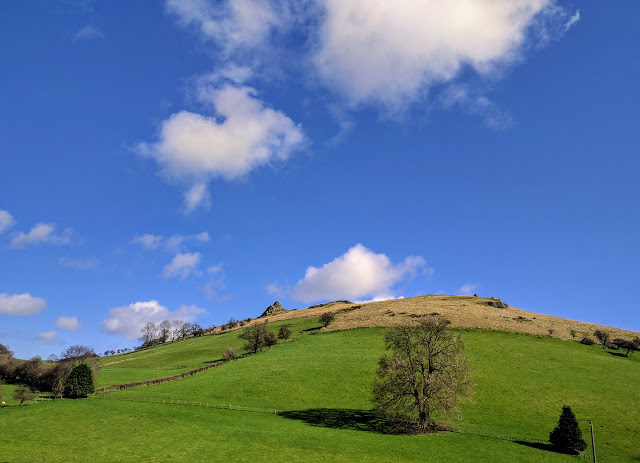 After Ludlow we headed east over the Shropshire hills to Bridgnorth. Again it was a relatively short trip but the cold northeasterly wind didn't help and by the time we arrived Christine was frozen. It took some effort to get her out from under the duvet and she wasn't at all convinced by my promotion of Bridgnorth. Once in the Railwayman's Arms, sat next to a warm fire and packed with a friendly crowd that really appreciated their beer she turned around and understood my enthusiasm. Bridgnorth is a really interesting place, home to the Severn railway and a lovely Georgian core complete with a Thomas Telford church. The remnants of its riverside port function make it even more interesting than Ludlow.

With the weather and wind a little more friendly our last day's cycling took us south broadly following the Severn then over to Malvern via Worcester. We followed the Sustrans route 45 for most of the way which, like many of these trails, involved a range of different surfaces. These included bridle paths which, in March, were a bit too much on the muddy side. Despite minor seasonal misgivings it was a great route (although I managed to miss the signs a couple of times) and we particularly appreciated the canal side path right through Worcester which almost completely avoided city centre traffic.

Malvern was a great place to finish our week's tour, what a fabulous place, all Victorian Gothic, a theme that was there in abundance in the hotel we stayed in. After a short ride down the hill we were back on the direct train to Brighton that brought us here last week, it couldn't have been easier.
If you interested in more detail on any of the routes than you can find them on Viewranger
Posted by John Hayes at 11:44 AM