There's a quote, can't remember who said it, but it is to the effect that happiness is about accepting that life has adversities and then gaining enjoyment from overcoming them. Well today we had an adversity, not a big one in scheme of things, and despite the initial disappointment, it was fun overcoming it. 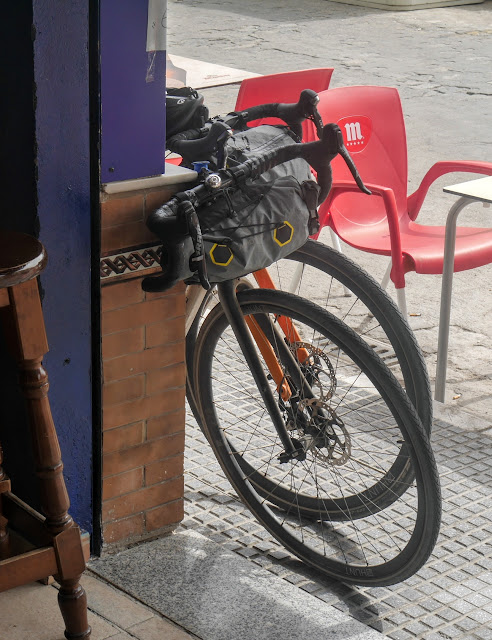 The day started well. We returned to yesterday's bar in the centre of Niebla for breakfast and more entertainment and were not disappointed on either front. It was packed but with a slightly different crowd. Three men behind the bar prepared coffee and toast and one took the orders and distributed the breakfast. He was amazing, leaning forward as he shot round the room and somehow remembering what the orders were and who had had what. Like last night, it was a noisy place with the Spanish typically grabbing any chance to socialise. We had two coffees each (not usually done in Spain where one is norm) and embarked on the bruschetta ritual. We gently sliced our toast, rubbed garlic onto its rough surface, drizzled olive oil onto the toast, covered it with tomato paste, lightly seasoned the whole thing and then devoured it, delicious! Breakfast came to 4 euros, good value! 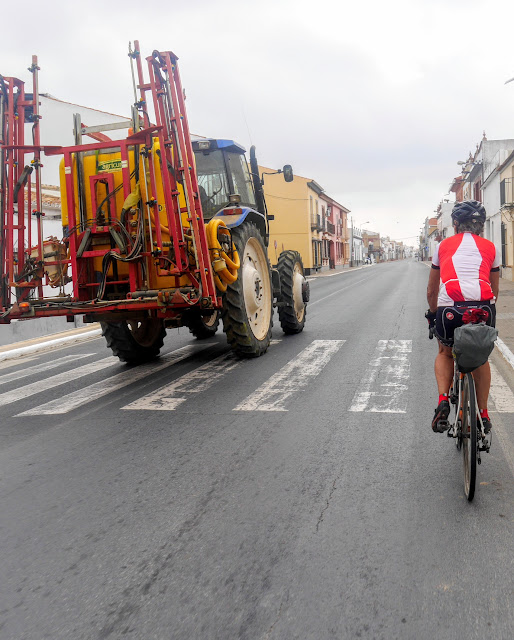 Fortified we left Niebla and headed off over the Roman bridge into the wide open expanses of Andulucia. The road was dead straight, slightly undulating and with a great surface. It can be hard to get the pace right. I'm heavier than Christine, go down the hills much faster, and cycling together can be tricky, today it went really well and we raced through the kilometres. 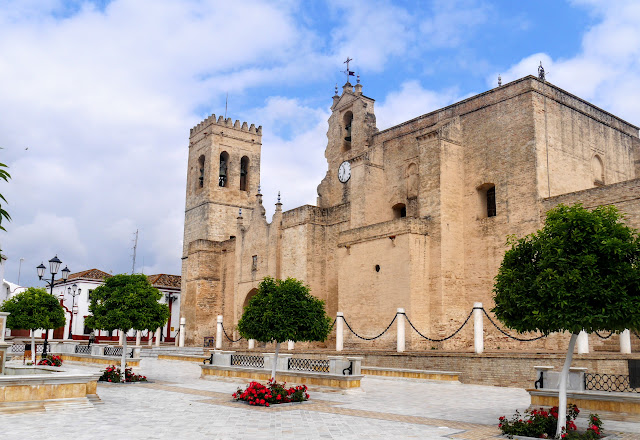 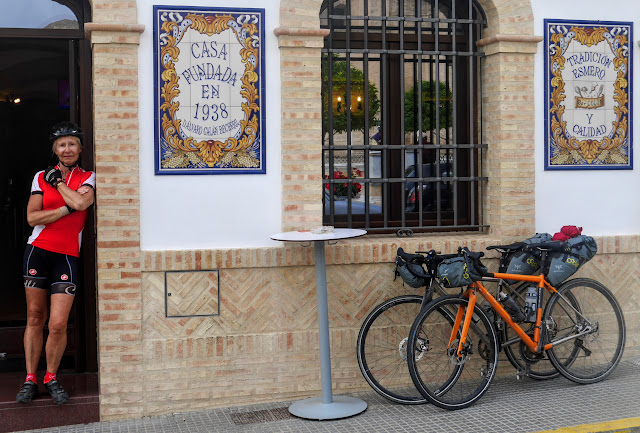 For mid-morning coffee we stopped at Villabla de Alcor, a pretty little town much like the others we had visited. We had cycled 30 kms in less than 90 minutes and were halfway​ to Seville. 20 minutes from the town Christine announced that her tyre had gone soft and that she had got a puncture. This is the first puncture we had ever had with our Schwalbe​ Marathon tyres so it came as a bit of a surprise. Anyway I then discovered that I had packed everything but tyre levers. Somehow, using other tools and a lot of effort I got the tyre off and the tube out but replacing it proved much harder. When it came to pumping the tyre up again it wouldn't hold the pressure and I had to conclude that I had pinched the inner tube. 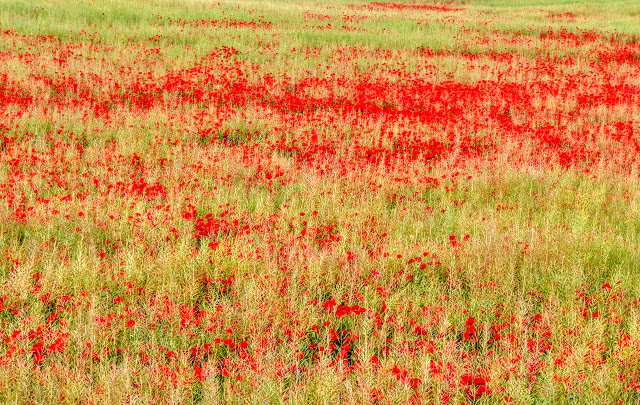 We set off walking down the road heading for the nearest town which was off the route and about 6 kms away. We then decided that I should go ahead and work out what the options were. There was a train station and, although I'd heard that Spanish trains aren't bike friendly, decided to try my luck. There wasn't anyone at the station. I went to a bar, a bar much like the bar in Niebla where, like that bar, no-one spoke a word of English. Across the square, flags were flying outside the town hall, and just before it closed for lunch I found a helpful woman, who obviously ran the place, who rang Miguel who said that he would be in town square in 30 minutes to take me to Seville. 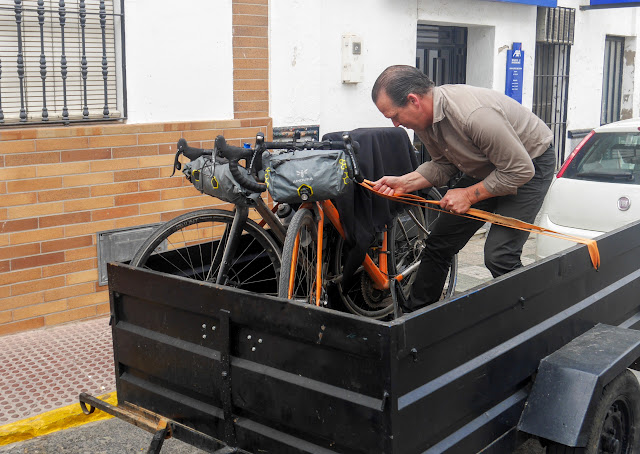 Christine arrived at the same time as Miguel who had gone to get a trailer to attach to his taxi. 40 minutes later we were in Seville just outside the apartment which is to be home for the next 4 nights.

The taxi by the way was very good value, even with a chunky tip. I been to places in Spain where they charge you both ways but none of that with Miguel.

Our good fortune didn't end there. I always intended to get the bikes serviced in Seville but didn't anticipate a bike shop just around the corner. Juan, young and with excellent English, was the classic cycling geek and proudly showed us the bike he had made with a bamboo frame. He quickly looked over our bikes, was reassuringly complimentary, and said it would be a pleasure to service them. I thought I might need new brake pads but he checked and said no, a different approach to back home where a service is sometimes an excuse to change everything. He said he charged 20 euros for a full service but he would do the pair of bikes for 30. I told him he should set up in Brighton.
Posted by John Hayes at 2:15 PM