Niebla is about halfway between Lepe and Seville and was one of the few places where I could find somewhere to stay. It turned out to be an amazing place, really interesting and hopefully a sign of things to come as we journey to Spain's north coast. 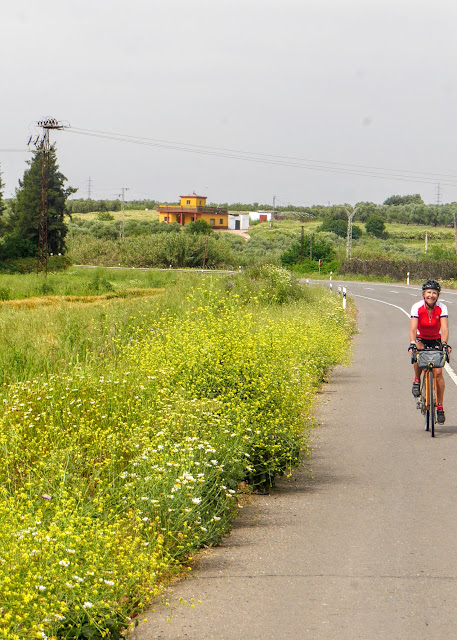 It might sound a bit judgemental given that this is only our second day in Spain but already it feels a lot more interesting than Portugal. There seems to be more going on here, more to see in both the countryside and the towns. 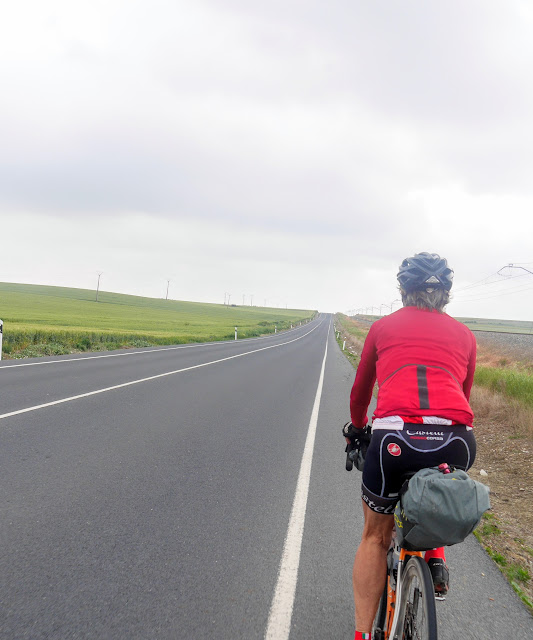 Today we have cycled from a plastic covered fruit growing landscape into one which is dryer and more open; a mix of olive trees and fields of wheat and baby sunflowers. Fairly flat, it could almost have been East Anglia back home in the UK, although everything is 6 weeks further on with some of crops starting to turn for harvest. The big difference, and it takes a while to spot, is that this isn't a countryside dotted with villages 2 or 3 miles apart but one of towns which are more dispersed. This creates a less intimate, more open and much 'bigger' landscape. 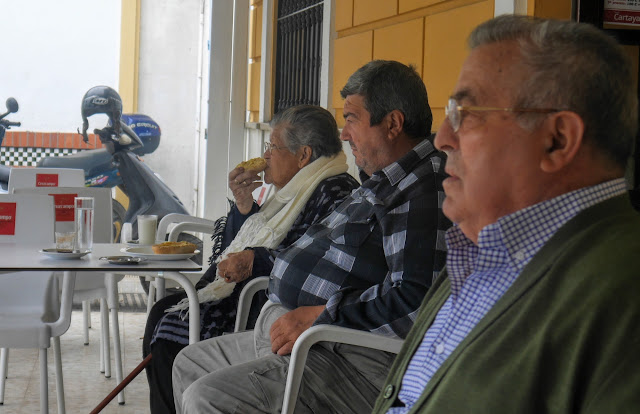 The towns themselves are the size of large market towns in the UK but more densely packed, tight streets radiating from a town square. They are also more interesting than their Portuguese cousins many of which had lost their historic core due to the Lisbon or Lagos earthquakes. 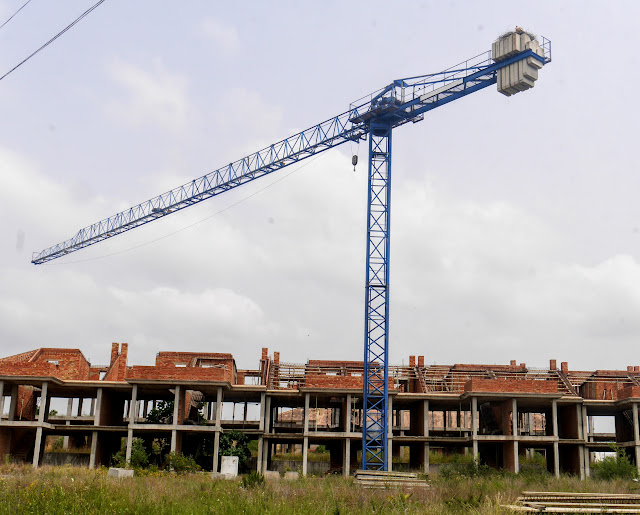 Although compared to recent visits to Spain, there were some signs that the economy is starting to pick up, it doesn't feel that things are firing on all cylinders. We saw a building site probably untouched for 10 years with a stork happily nesting on a crane (a mechanical crane!). Some building is underway and an abandoned road scheme near Beas showed signs of life but things still look slow and indeed unemployment rates in Andulucia, which is Spain's poorest region, remain eyewateringly high. 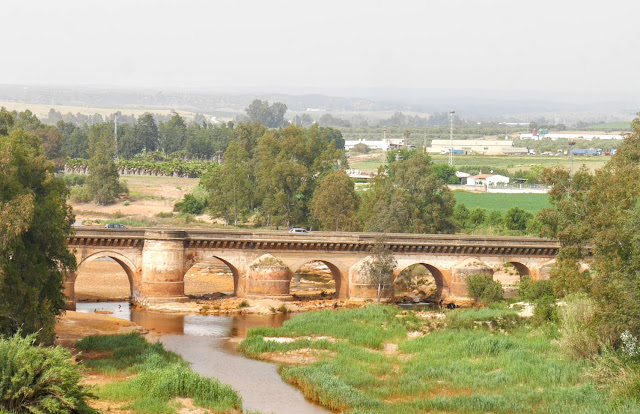 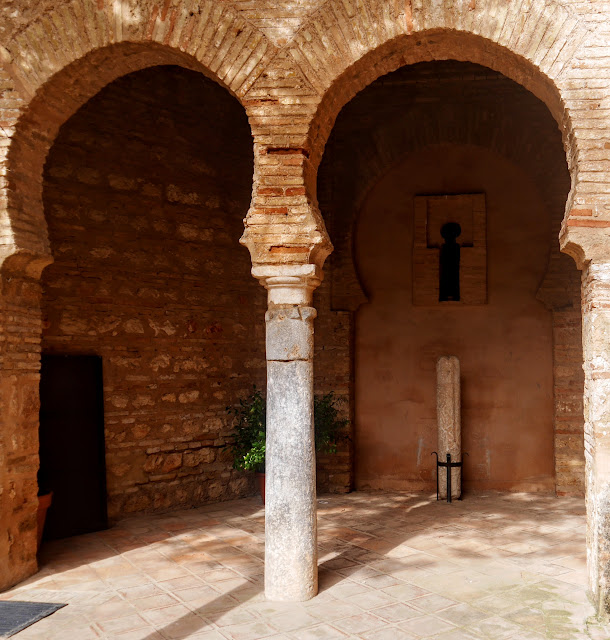 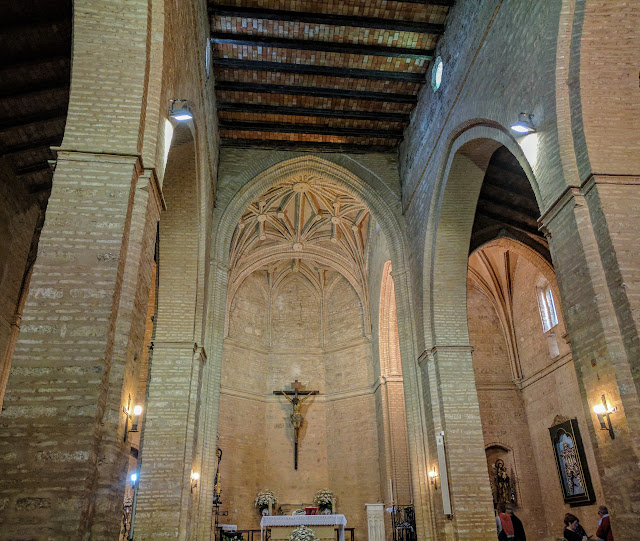 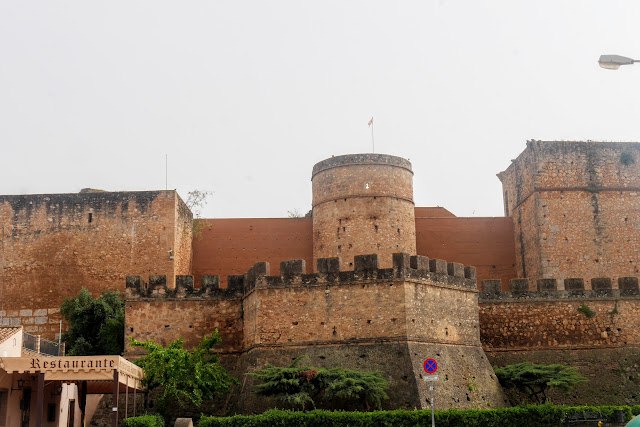 Niebla was 65 kms from Lepe but was well worth the ride. The town itself doesn't have much going for it, not even have a hotel, but the historic core was amazing. Originally settled by the
Phoenicians it was then occupied by the Romans and the Moors. There is a Roman bridge still used by road traffic and the Moorish walls, which are complete, are supposed to be oldest standing in Europe and date back to the beginning of the conquest (713). The star of the show for me was the Church of Our Lady of the Granada, a church built on the site of a mosque that combines Romanesque and Arab traditions including key hole shaped doors.

Perhaps less picturesque but taking more time to go round was the Guzman castle, built after the reconquest and largely intact. Particularly absorbing was the tour of the dungeons and a truelly hideous display of torture devices, an exhibition definitely not for faint hearted.

Escaping the dungeon, we made for the nearest bar and sat absorbed by its hustle, bustle and sheer noise. Fueled by vast quantities of coffee everyone seemed to be shouting. If only they could have calmed down a bit than dinner might have been earlier than the 9 o'clock promised. Too late for us north Europeans we bought some cheese and tomatoes and crept back to our apartment.
Posted by John Hayes at 3:49 PM