The first piece of news is that Lepe is in Spain. After catching my 5th and penultimate ferry (the last one on this trip with be from Santander to Portsmouth) we crossed the border from Portugal and we're now in Spain. 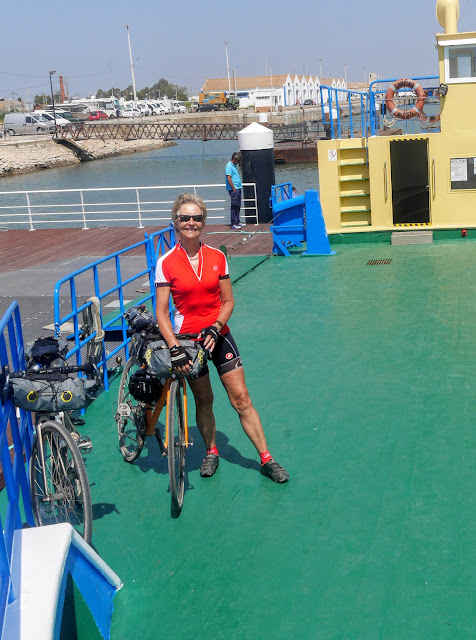 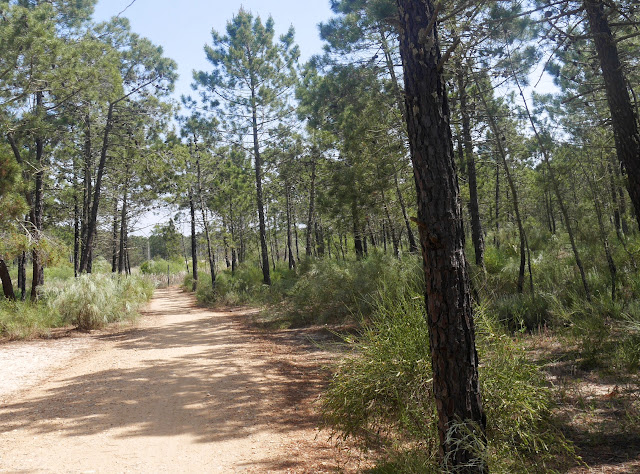 The second piece of news is that after yesterday's dissension, today Christine is a happy bunny. She was very pleased with the route although felt that in my efforts to address her concerns about cycling on gravel, I'd cut out too much of the route through the national park in Portugal. Having discovered at breakfast this morning that we cycling through what some think is Europe's best place for birdwatching she thinks we should have allowed more time for the 'birdies'. It really is hard to win sometimes. 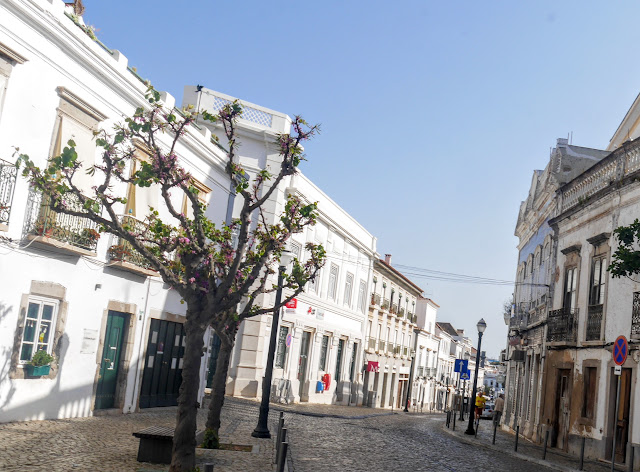 Today we cycled about 60kms and although we had to mess about with the ferry it was a very relaxed day. We got to the hotel earlier than we thought we would and it was better than we expected. It meant we could spend late afternoon sitting by the pool and enjoy what is now perfect weather. 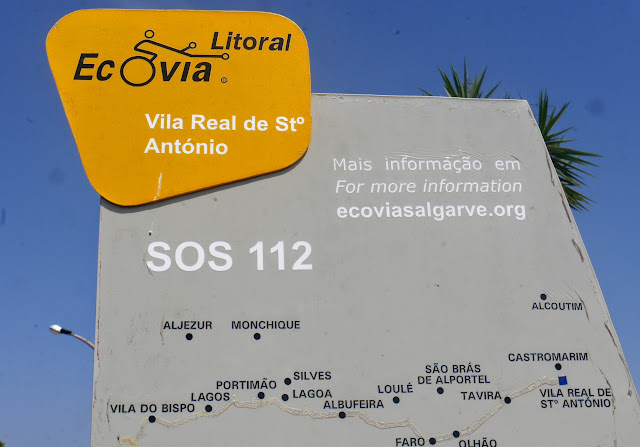 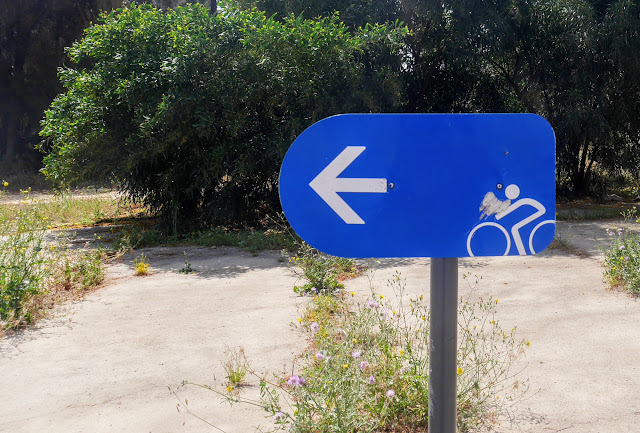 The excellent signage on the route reflects the fact that in the Algarve at least, Portugal has got its cycling act together. Little did we know but we have been cycling along something called the Litoral Ecovia which runs for 250 kms all along Portugal's south coast. 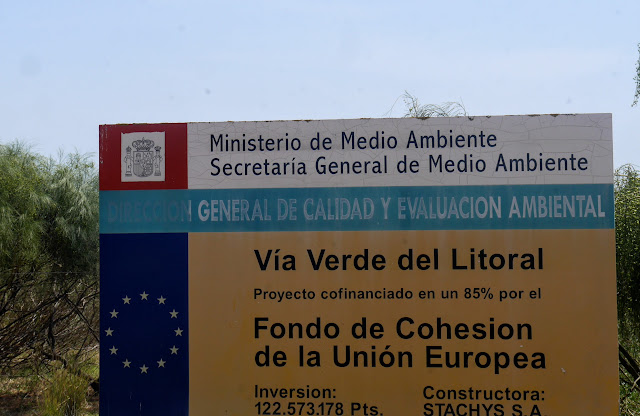 The route is supposed to continue on into Spain where it was to follow an old railway line. The website (www.viasverdes.com) that supports all the ex-railway route cycleways says that the route is impassible in places so we decided to give it a miss despite the fact that it's plotted on maps. It's a shame because it looks like a great route and would have taken is off road almost all the way to Seville​.

Crossing borders remains part of the excitement of travel. Given the shock of Brexit it's impossible not to think about nationality when you're traveling through Europe. The Algarve is a very international place and has absorbed huge numbers of migrants from northern Europe in general and the UK in particular. Pink faced English people, both tourists and residents, were easy to spot. 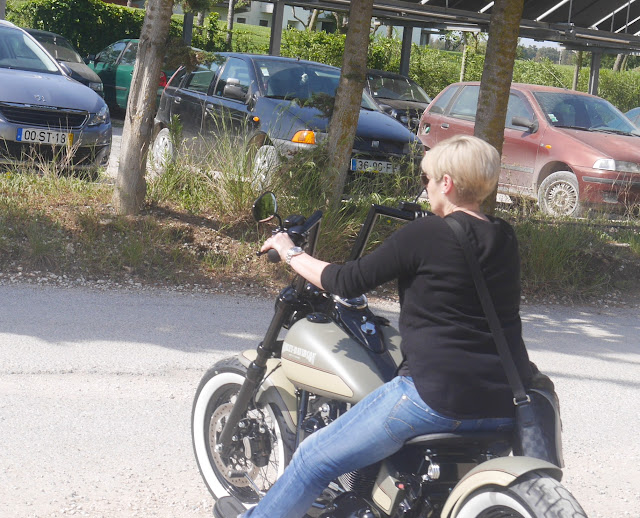 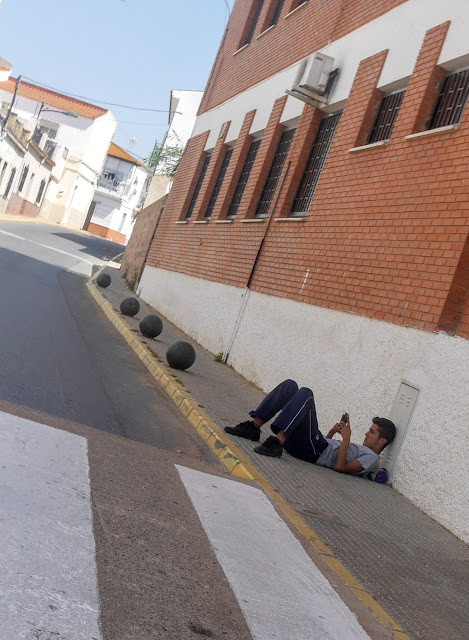 Just as interesting, and obvious, are the huge numbers of Germans who like the British seem to turn up in the Algarve to do their own thing. We saw 4 massive trucks from Germany containing hundreds of huge motorbikes. Clearly a German motor biking club, actually elderly German hell's angels, they were going to be burning German rubber in the Algarve. 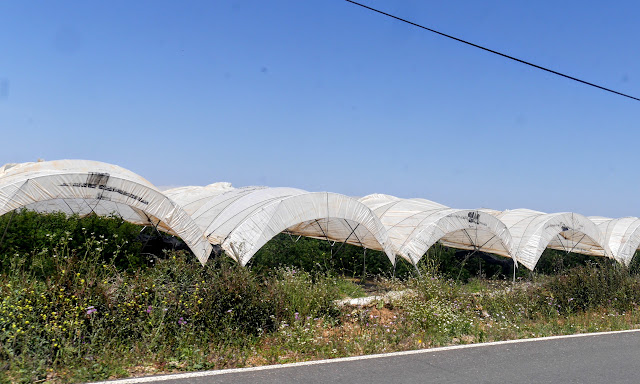 Anyway as soon as we got off the ferry from Portugal we welcomed Spain like some lost friend and instantly started to exaggerate the differences between the two countries. Christine thinks the Spanish dress better, I'm not sure if there is much difference; we both think the Spanish are noisier; we think Spanish food may be better; and, most important, we think that Spanish road surfaces are smoother.

Also the scenery is completely different. Yesterday we cycled through endless saltpans, saltpan alley, today the landscape for miles around is covered in plastic. If you're in eating early season strawberries in northern Europe it's almost certain that they have been picked a few hours ago here in this corner of SW Spain.
Posted by John Hayes at 7:24 AM