To get back on schedule we caught the train from Lagos to Faro and then cycled 40 kms to Tavira. We then have three days to get to Seville when Christine flies to and from London. After that 4 day break we will set off on the main Spanish leg of our trip up to the north coast.

Today's trip was controversial. As we left Faro on a busy main road Christine saw a sign that said Tavira was 20 kms away and somehow this became fixed in her head as the correct distance. Despite the fact that we had plenty of time she then couldn't understand why we were on a route that was 40kms long. The tension between getting from A to B the fastest and usually easiest way and taking the scenic and usually more interesting route is a constant. 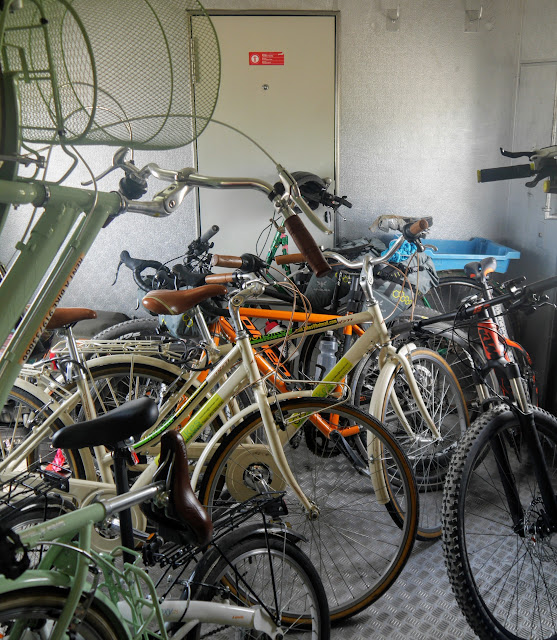 Anyway today started well and the train journey was great fun. The coastal train starts in Lagos, stops everywhere, takes forever and runs every 2 or 3 hours. Today the four carriages were packed with locals and holiday makers on their way to Faro airport. Bikes were stored in a tiny compartment at the end of the train. Initially there were 9 bikes but more kept arriving and after a few stops there were 16. The conducter was determined not to turn anyone away and every time a new bike arrived all the other bikes at to be moved to accommodate it. It was good to see everyone getting involved and despite the risk to paint work, people' cooperated. 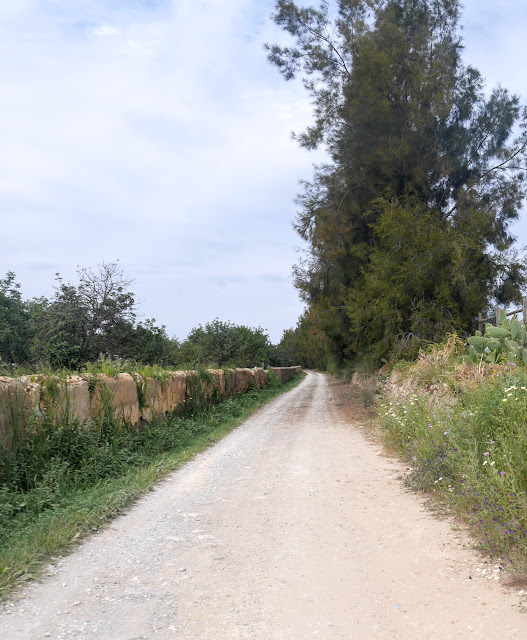 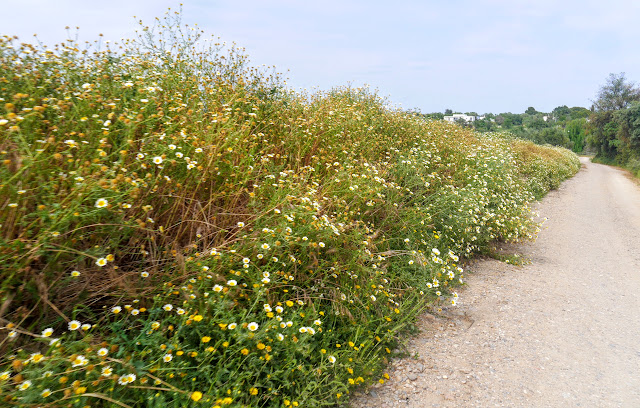 This stretch of the Eurovelo 1 is classed as planned but not adopted but generally speaking the signage was better today than it had been on the adopted stretch along the west coast. Like the west coast the route was both on and off road but here even some of the 'road' stretches used by local vehicles were also gravel. This of course added to Christine's sense of conspiracy. 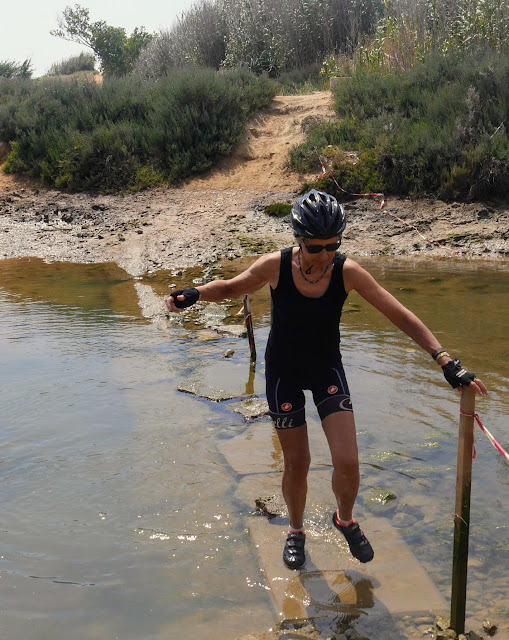 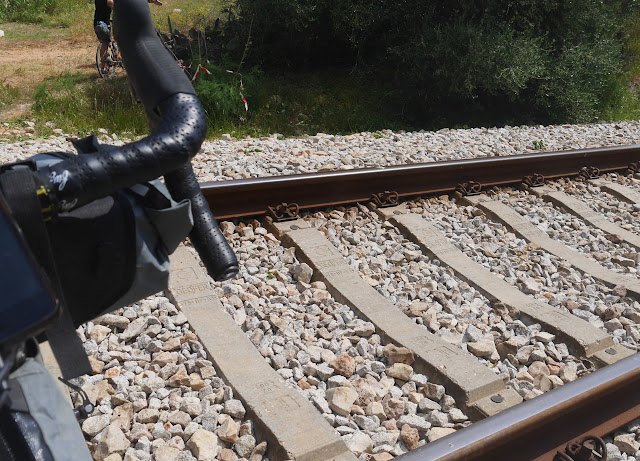 We did actually make things even harder for ourselves at one point and followed a stretch of Eurovelo marked on the map but not signed on the ground. This took us into deep undergrowth and involved 'wading' through a stream and climbing over a railway line. 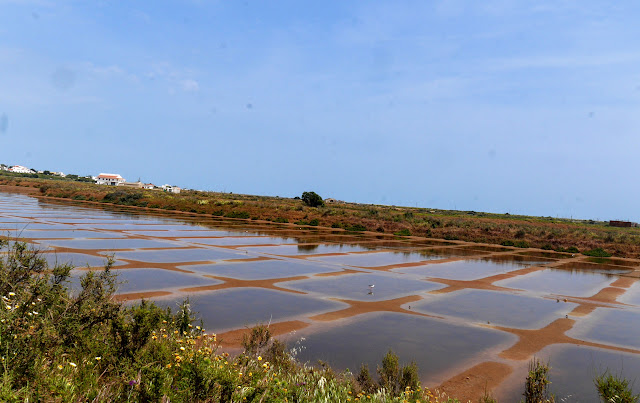 The route took us through an interesting landscape but one which even I, desperate to defend it, couldn't describe as beautiful. This is the land of the saltpan, I've never seen so many, and the route generally followed the raised banks that seperated their otherwise endless rank. If you're at all interested in birds this is a place to visit. I'm slightly interested, saw lots I haven't seen before, but Christine unfortunately isn't and refers to them generally as 'birdies'. 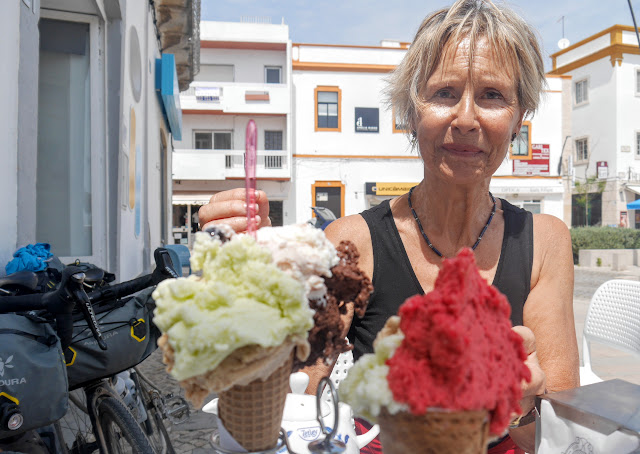 Our meandering route meant that we also got to visit the local villages. It was surprising really, given that these places felt well off the beaten track (not beaten enough for some people), how lively they were. There were many restaurants and they were all packed with people eating grilled fish. 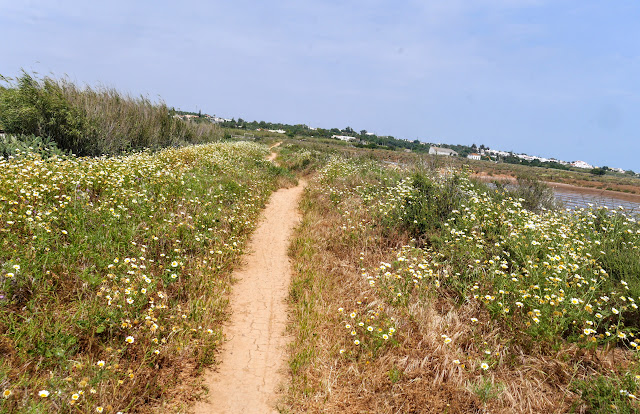 After cycling for exactly 40kms we arrived at Tavira just in time to watch the semi-final of the FA cup were the best team unfortunately lost. An imperfect end to an imperfect day.
Posted by John Hayes at 7:57 AM