After a horrible day yesterday, today was so much better. The sun was shining and for first time since leaving Seville we felt warm. It was not however a day without controversy and we continue to learn lessons about cycling in Spain. 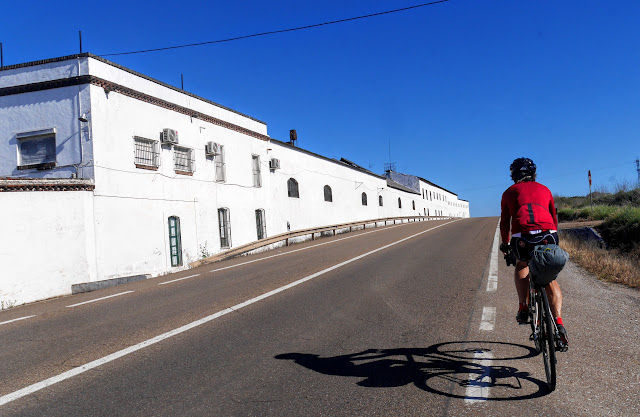 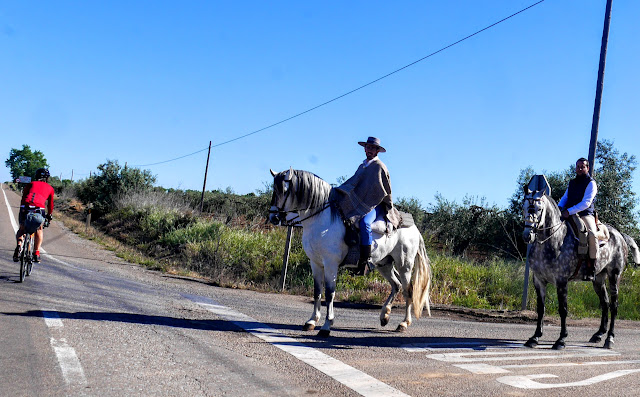 We are following a route recommended by the designers of La Ruta en Bici, the cycling version of the Ruta Vía de la Plata, an ancient route running from the Seville to the north coast. There are two versions, the mountain bike route and the road route. We are following the road route. So far, apart from minor variations, the route has been following the N630 a significant road but fabulously​ empty due to construction of a motorway alongside. Today we have learnt that where the N630 runs embarrassingly close to the motorway the designers of the road route find an alternative which may not be road at all but gravel. 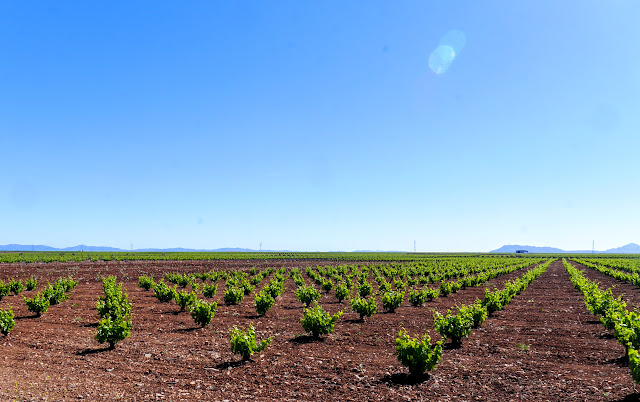 Now this is a trade off which I for one find reasonable but which Christine (the one) finds totally unacceptable. She reasons that gravel equates with mountain bike and she had been promised a road trip so how come there are stretches of gravel. She's happy with the proximity of a motorway providing the trade off is a good surface and virtually no traffic. 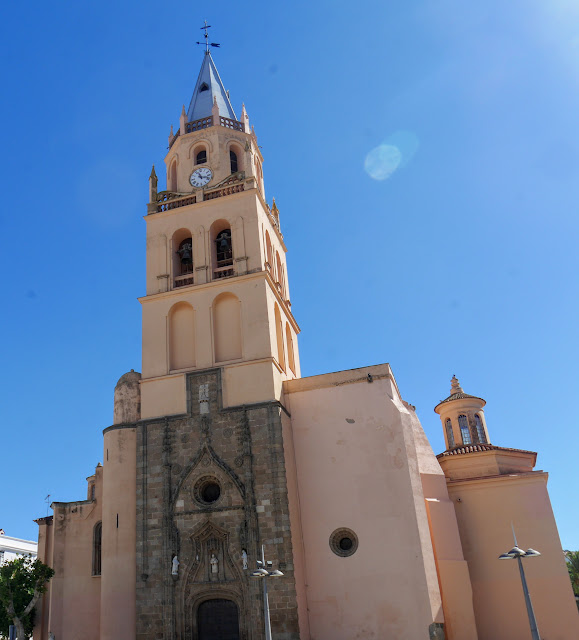 Today we left Zafra in the sun on a chilly morning and blasted our way 20kms along the empty N630 to Villafranco de los Barros where we had a coffee stop. Here we left the main road, which then stuck limpet like to the motorway, and headed north cross country. Until we started I had no idea what the surface was going to be like (I had my suspicions) but it turned out to be gravel. The complaints and grumbles then started. The scenery, probably the biggest vineyard in the world, vines as far the eye could see, didn't exactly help. 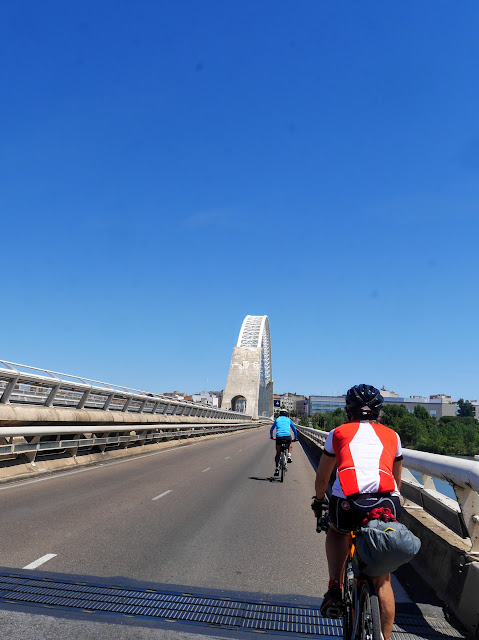 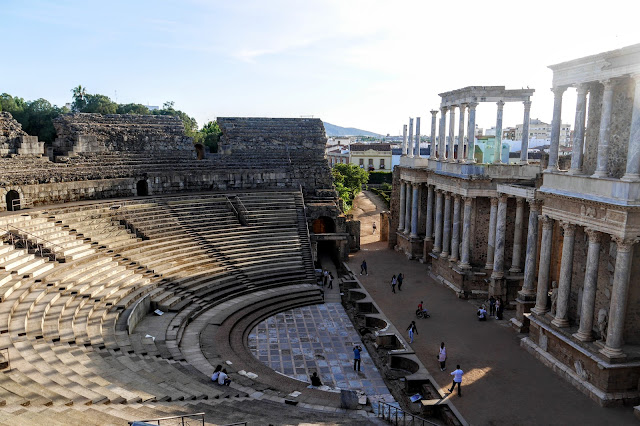 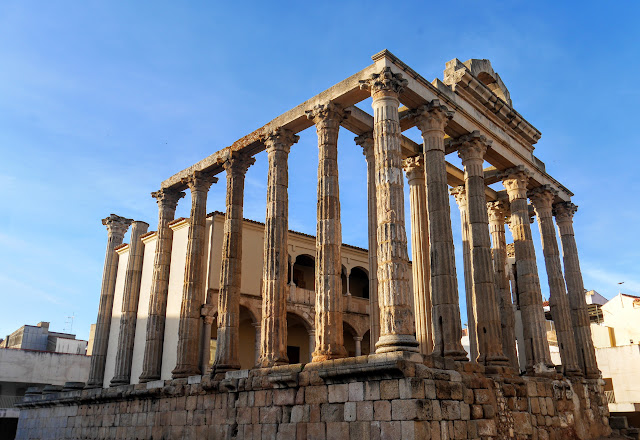 After 90 minutes and 25kms we emerged onto a smooth road at Torremajia, had a lemonade and sandwich and agreed that we would avoid gravel for the rest of the trip if we could, even if this meant motorway tracking. It's worth it if it stops the grumbling. We started as we meant to go on and modified the route into Mérida. 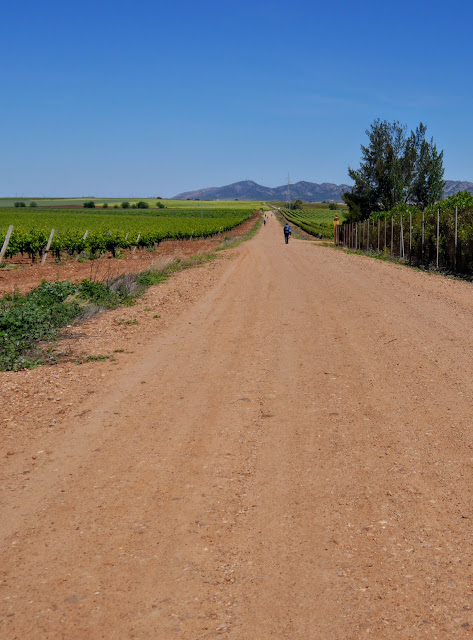 By the way the gravel route followed the Vía de la Plata St James Way route and we saw lots of 'pilgrims' slogging their way northwards on the most boring path imaginable. It must be a truelly hideous walking route.. It's one thing to be bowling along at 15kms an hour but another to be walking it. 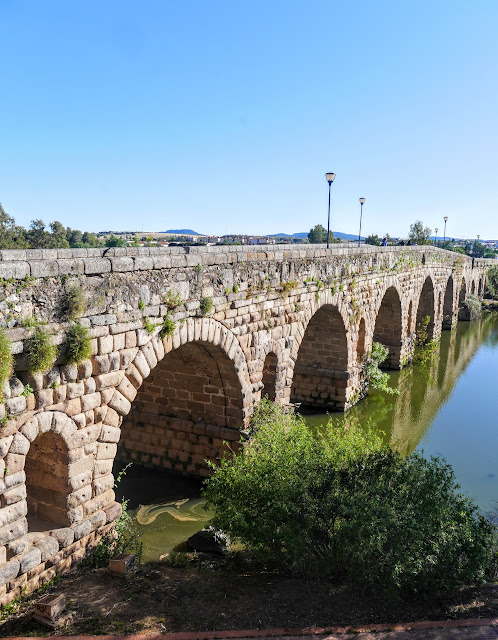 Arriving in Mérida in the sunshine we had lunch, had a rest and then went to explore. What a place, the town has Spain's best Roman remains, and the sights include the longest Roman bridge, a theatre and an amphitheatre as well as a temple dedicated to the goddess Diana. Wandering around the town on a cool but sunny evening was a perfect way to end the day..
Posted by John Hayes at 7:08 AM