Stephen on the GR1 - a guest blog

What's it like walking the GR1 - great feedback from Stephen Mulvey

Most years I spend a week cycling with friends at the end of May – always in mountains, in France or Italy. In 2016, though, there seemed to be a lack of collective will, so I started thinking about a solo walk. I googled “long walks Spain” and came across John Hayes’ blog describing his walk along the GR1. Then I bought the book and decided to tackle the first three sections (skipping the last stage of section 2 – Fontecha to Berantevilla), starting towards the end of June. The referendum on EU membership took place on my day three, as I approached the Pena Espiguete, under blue skies, and crossed the Collado de Cruz Armada. Whenever anyone mentions this fateful vote, I see in my mind's eye a winding track leading along a valley towards a conical peak.


By this point (day three), I was beginning to feel comfortable. The first day, I have to say, was tough. It was hot, there was a fair amount of climbing, and not much shade. I also added on some extra kilometres by walking part of the way to the starting point, the Puerto de Tarna. Even after I’d been going for days, each collado still felt quite hard-earned and deserving of a panorama photograph. There was usually a breeze at the top and of course an immense view of a landscape largely empty of people. A satisfying moment.

I saw more storks in the first week than I have seen since. The scent of gorse, and later the scent of broom, was a pretty constant accompaniment, and the skies stayed blue until the end of day four, when a thunderstorm broke over the Ruesga reservoir, forcing me to take refuge in a bar. I was the only customer.
On day one, I saw one other group of walkers, who parked their car and set off on a circular walk (I think they disappeared into a bar in Acebedo). On day two I met a lone walker without a rucksack. On day four I passed a couple coming in the opposite direction carrying rucksacks. But most of the time I was completely alone. On some days I saw no-one except when passing through a village. This explains why the path is occasionally overgrown and hard to make out, and in a couple of places disappears altogether.
On day 10 (Paresotas to Boveda) I was joined by my wife and daughter – our rendezvous the church of San Panteleon de Losa, one of the possible locations of the Holy Grail. I had managed to buy food for a picnic in Quincoces de Yuso, get a cab to Paresotas, and arrive in San Panteleon by lunchtime. My new companions, however, were sleep-deprived and found the weather uncomfortably hot. The hills, it soon transpired, were too steep. It didn’t help that the path disappeared briefly on the way out of San Panteleon. By the end of the afternoon I was carrying two rucksacks.

The excellent Neithea Puelles casa rural at Boveda helped to lift everyone’s spirits, but we only walked for two more days then took a train from Miranda de Ebro to Bilbao and hired a car. We still stayed at some of the accommodation I had pre-arranged, including the wonderful mill at Penacerrada (which has a crystal clear spring bubbling up in a pool outside the front door) and the Parador at Olite.  In Bernedo we stayed in a casa rural that is available only for two nights or more unless you happen to be walking the GR1. It was therefore slightly embarrassing to turn up in a car. (From Bernedo, by the way, it is only a short drive south over the ridge into the Rioja valley, and the amazing walled city of Laguardia.)

So I ended up skipping the entirety of section three, as well as the last stage of section two. This year I considered making up for the omission, but decided instead to pick up the path in Olite. Then, when I could not find accommodation to book in Ujue, that became my starting point. I stayed the night in Olite, took an early morning bus to Tafalla, and then hitchhiked to Ujue before setting off.

Once again, the first day (Ujue to Sos del Rey Catolico) seemed really tough. I plodded into Sos that evening in the same way I had plodded into Salamon, at the end of section one stage one, and this time with large cushion-like blisters on the soles of my feet.
This time too, though, I found myself getting into the swing of it after the first day. I began seeking out high ground – the Castillo de Roita, on day two (Sos to Petilla de Aragon) and the Puy Mone on day three (Petilla to Biel). My day five was Riglos to Loarre, and I added a short climb to the Pena del Sol. From both the Puy Mone and the Pena del Sol there are exhilarating views in two directions – over the vast plain to the south and towards the peaks of the Pyrenees as you look north. While soaking all this in, I was able to lie on a bed of flowering wild thyme and tiny wild daffodils. On day seven (Bolea to Arguis) I added in the Punta Peiro. I regret now having stopped at the high point of the ridge (1579m), rather than descending to the Punta itself (1501m). At the time it felt unnecessarily perilous. It was enjoyable, nonetheless, to lie around at the top, looking down on griffon vultures from above.

If you study the GR1 book closely you will find there are two stages that John gives the highest grade, five. One is section five stage one - Murillo de Gallego to Loarre - which I have now done (though I started at the refugio in Riglos, rather than in Murillo). The other is section five stage four – Arguis to Nocito – which will be the first stage I tackle on my return. 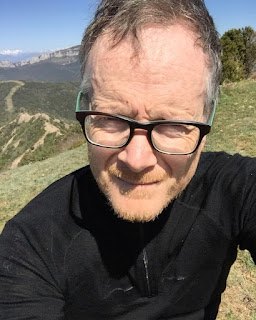 Stephen was not an experienced walker before he set off on his first journey to Spain.  It's a tough first trek, you are on your own out there, so congratulations to Stephen and well done for going back for a second bite at what is an elephant of an adventure.