Day 6 to Grimaldi turned out to be a lot tougher than I expected and by time I got there, about 3-50, I was totally wacked. It’s been interesting though and although the scenery was a little dull (the pictures are rubbish), I've picked up some valuable stuff for the guide.


The first thing I learnt yesterday, on my rest day, is to be careful with booking.com on the breakfast option. The room seemed a good price in a very swanky hotel but I didn't notice that the price didn't include breakfast. Only when I had eaten and was presented with a mega bill (18 euros). Not to be ripped off twice I decided to eat in a bar on my way out of town today and aimed for the Churrería Hnos Ruiz where apparently you can get the best churros in Cáceres.


Churros are essentially deep fried choux pastry, a sort of extra unhealthy donut. People eat them in vast quantities here and I decided a bag of them would set me up for the day. Arriving at the Churrería Hnos Ruiz I was surprised to find what looked like a protest - people were arriving, reading a notice, shouting abuse and then leaving. The owner, a third generation churros maker, wasn't happy but his deep fryer was out of action - no churros. It was a huge device, contained gallons of what looked like old engine oil, but sat unproductive in the corner. Watching the disappointed customers was such fun I decided to have two huge slices of toast and coffee before heading off into the countryside having only parted with 2 euros. 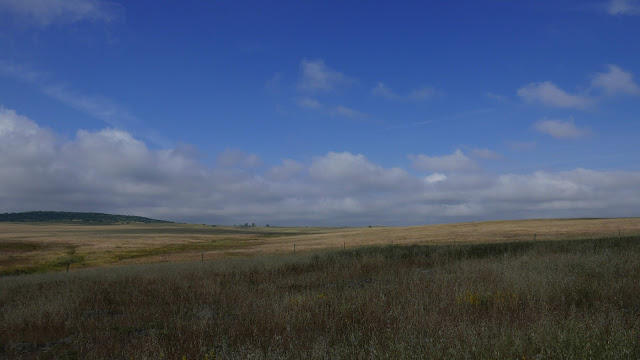 The first 12 kilometres took me to the little town of Casar de Cáceres. Once I’d escaped what was quite a busy narrow road the trail was pleasant enough passing through countryside that felt huge and open. The town was a little bigger than I remember from last year but sadly with little to commend it. After another cup of coffee, consumed with a small piece of tortilla, I left what turned out to be the vestiges of civilization for some time. 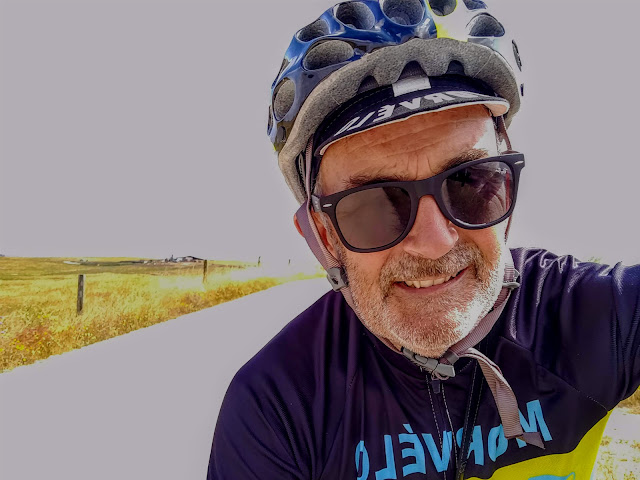 From Casar de Cáceres to Grimaldi, which was about 45 kms (should have been less, I’ll explain later), I saw about 7 people. 4 were pilgrims and the other three were working on what is presumably one of Spain's biggest construction projects, the new high speed train line from Madrid to the Portuguese border (hopefully the Portuguese know it's coming). The countryside was totally empty. 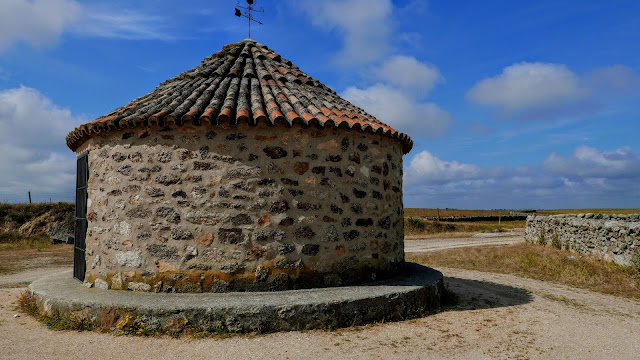 The first part of the ride into this totally empty countryside side was best part and the busiest - here at least there were some cows and a few sheep. The trail was good, a walled lane with a nice soft surface. About 3km from Casar de Cáceres, I passed a small domed building which I think was a chozo, a shelter for shepherds. 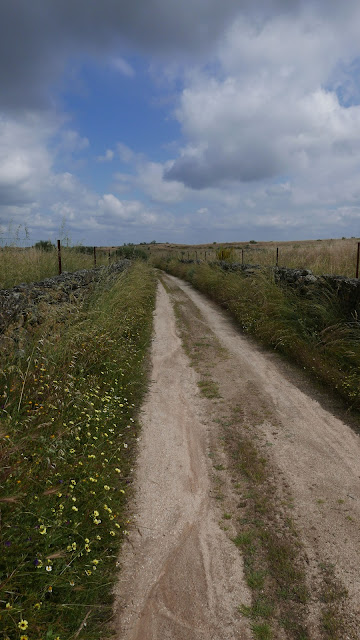 After 20 kms the route descends past the empty construction site down towards the equally empty N630. This is a beautiful stretch of road and tracks the edge of a huge reservoir which this year was full to the brim. The off-road route follows a narrow path about 20m from the road and traverses a series of deep gullies. After making steady progress I go too fast into one of these gullies, the front wheel hits a hole and I come off. I find a bench a little further on where I do a spot of maintenance (I think I lost some air from the tubeless tyre) and decide at the next exit point to leave this grappy path and get on the N630. 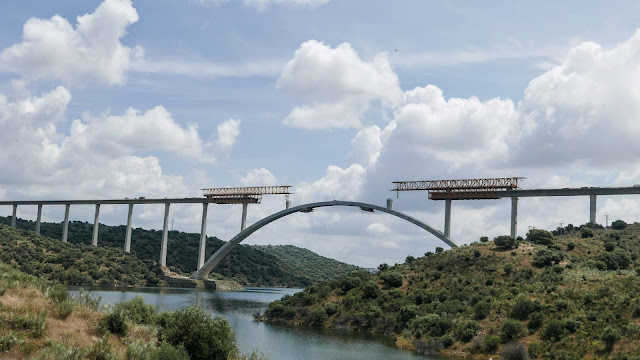 After blasting alone the N630 for 5 kms I realise I have left my sunglasses on the bench and go back to pick them up. An extra 10 km on the  day.


Leaving the N630 the route makes a steep ascent along what can only be described as a nasty path. Progress is slow and hard work. The open grassland of the first part of day has been replaced by scrubland, reminiscent of a Mediterranean landscape but with different plants. Although there was some evidence of grazing the numbers supported must be very low and route saw very little in the way of traffic. Perhaps in consequence the surface was very poor, dominated by cobbles and I was progressing at less than 10 km an hour.


Ironically it was at this point that information boards described what an amazing road the Ruta Vía de la Plata was when the Romans were in control. Properly surfaced it was wide enough to cope with traffic moving simultaneously in both directions.


The surface did improve for the last 10 kms but a pass had to be climbed and the route up to it was so steep that the bike had to be pushed for 150m or so, really tough after what gone before. 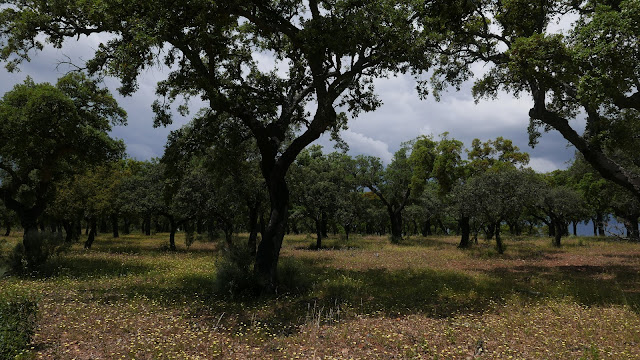 Almost mocking me, the scenery approved for last couple of kilometres. After all that scrub I was treated to a reminder of the wonderful dehesa.


So the tank was empty when I got to Grimaldi but amazingly a restaurant was still serving lunch when I arrived at 3-50.  Diving in I sat down for the menu of the day. A huge bowl of lentil soup with morcilla and chorizo, lamb cutlets and chips, flan, a massive bottle of water and half a bottle of wine all for exactly half the price of yesterday's breakfast. By the time I’d finished eating it I had recovered.
Posted by John Hayes at 7:59 PM