After yesterday, today was a bit of an anticlimax. With hindsight, I should have gone from Mérida to Cáceres in a day, had a epic 90 km trip and earnt the planned day off in Cáceres. 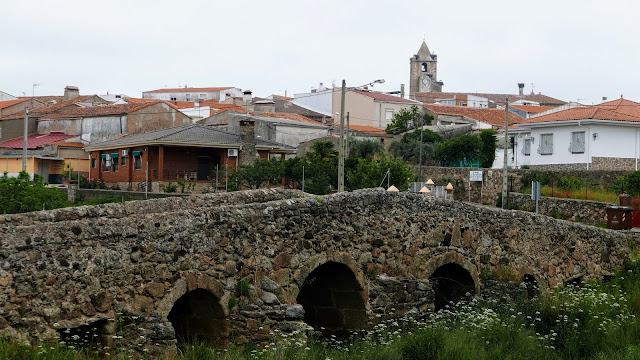 The weather this morning was misty and cold, I hadn't slept that well and was feeling sorry for myself.  Given that I had plenty of time I planned to go off-route and visit an interesting looking church to south of Alcuescar (with Visigothic, Moorish and Romanesque elements) but in the end it's attractions were not strong enough to propel me up a very steep hill through the mist on a rough track. Retreating I shot down the hill through Alcuescar only to discover that I’d left a water bottle and my spare sunglasses on the wrong side of locked door back in town. Recovering them would be a major challenge so I left them but I was now officially fed up. 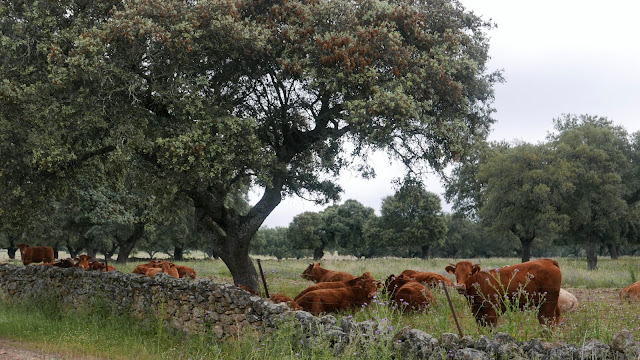 Things picked up a bit as I cycled into what I think will be my last stretch of dehesa. Apparently it finishes at Cáceres. It looked different on a grey day, less impressive, but that could have been my mood.


Crossing a little Roman bridge I cycled into the village of Casas de Don Antonio in search of coffee. It turned out to be a nasty little place,bereft of coffee and with a few sullen locals indignant that anyone should bother to visit them.


The route turned sharply right shortly after the village taking a course that ran north just a few metres from a classically empty N630 which itself was running parallel with an almost empty motorway. The simplest thing would have been to join the N630 and follow the road version of the Ruta Vía de la Plata into Cáceres, but of course that would have been cheating so I stuck with slower grassy path. 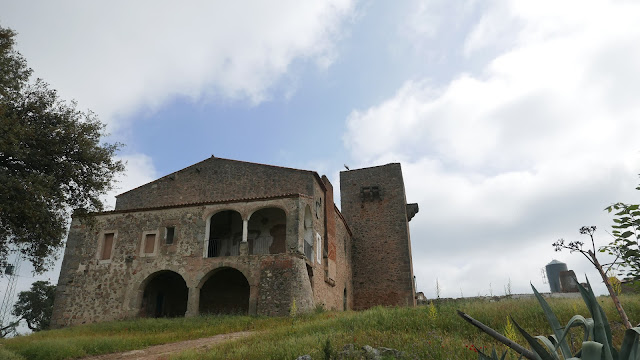 By this point I was starting to lose the plot. Desperate to pull something out the bag on what was looking like a dull day I saw a big castle like thing off the route to the east and set off down a trail to investigate. Turned out that this was the remains of a corjito, a fortified farmhouse, similar to a masia in Catalonia, that had clearly been the centre of some huge cattle enterprise. Up close it was a very impressive building.


The building, which felt like a personal discovery cheered me up a bit, and my mood stepped up again when a huge brown raptor, that had been picking over the carcass of a cow, lumbered into the air in front of me. It was big and very brown, I speculated that it was an eagle but it was probably just a buzzard. 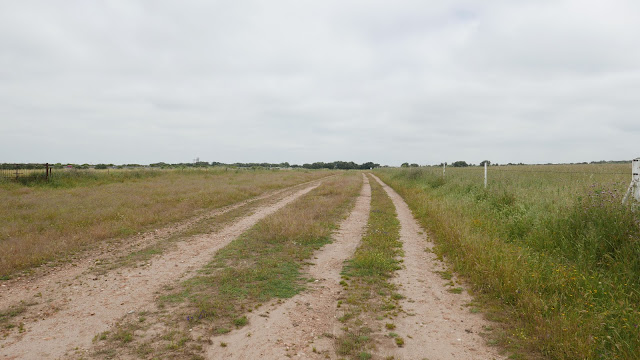 After coffee in Aldeo del Cano, and revitalised, I was back on the trail and appreciating the cycling once again. The landscape had changed, it's getting more open and yes I think it's end of the dehesa. The route was now heading straight down the middle of a Cañada Real, a medieval livestock superhighway wide enough to provide grazing for cattle as they travelled from one side of the Spain to the other. The routes, which feature all over country, continued to be used until the 1950s and the dimensions of this one, which were defined by royal statute, were clear in the landscape. 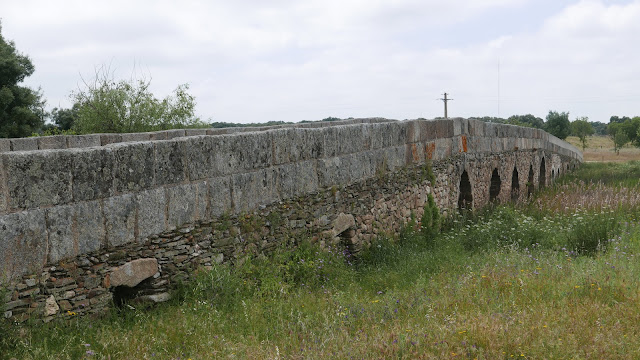 After crossing another Roman bridge, La Punta Mocha, passing through the modern settlement at Valdesalor, the route became messed up, sploit perhaps by historic improvements to the N630. Just before Cáceres there was a sustained stretch through building rubble where following it didn't make sense.  I decided to escape, climbed barrier, and joined the N630. I’ll recommend avoiding this stretch in the guide. 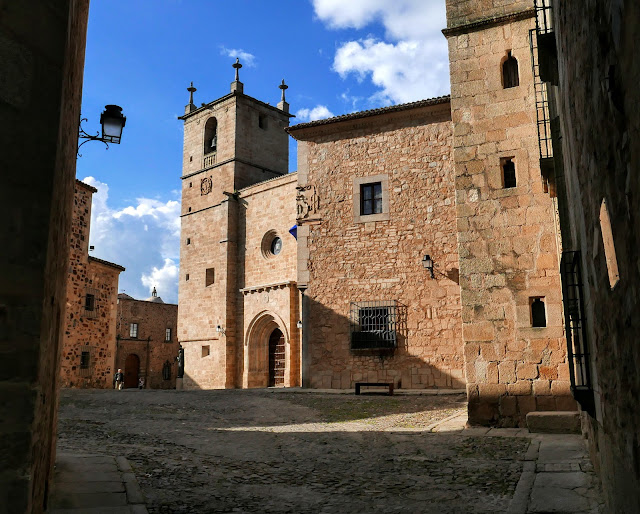 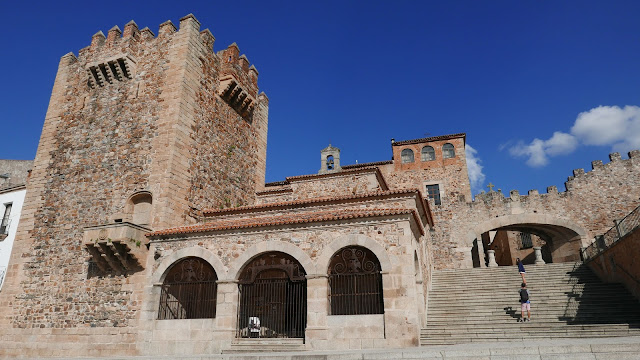 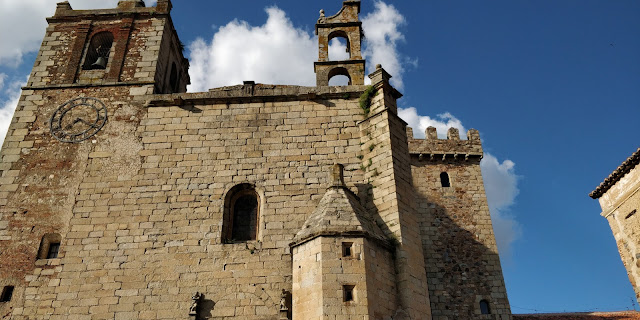 I found my hotel in Cáceres with uncharacteristic efficiency, showered and went out in hunt of the famed Cáceres taperia. The place I had chosen turned out to be closed for holidays but there was a vegetarian restaurant next door. The food was excellent and after days of a pig heavy diet should help ward off scurvy. 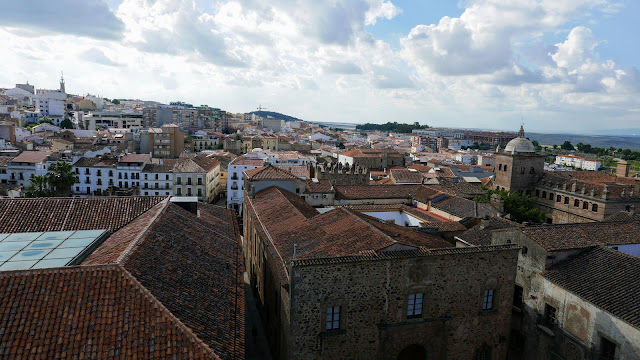 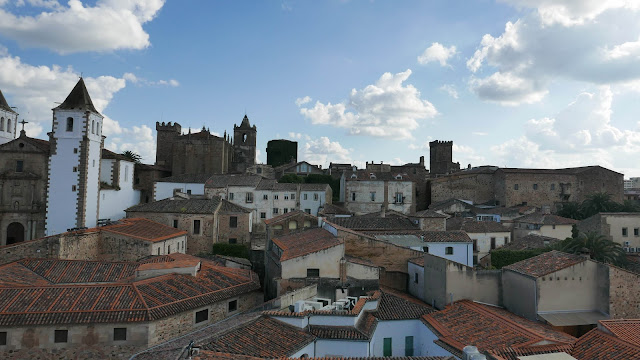 First impressions of Cáceres are very positive. It claims to have the third most important concentration of medieval buildings in Europe and having spent of couple of hours going round the historic centre I can believe it. Interestingly because the main sites are confined within the old walls, and it doesn't take long to get round them. I’m here for two days which could be more than enough.


No blog tomorrow I'm giving everyone a day off!