Today's cycle ride was dominated by what I now know is called the Dehesa. Characteristic of much of southern Spain it's an agrosilvopastoral land use system (thanks Wikipedia) combining agriculture with forestry - black Iberian pigs, cattle and goats grow in harmony with cork oak and holm oak. The pigs eat the acorns limiting tree numbers which means there is enough grass for the cattle, goats and sheep. The trees that have made it provide shade for animals and work for the locals who, as well as looking after the animals, whittle wood and stuff bottles with cork.  It’s a perfect system and also incredibly beautiful. 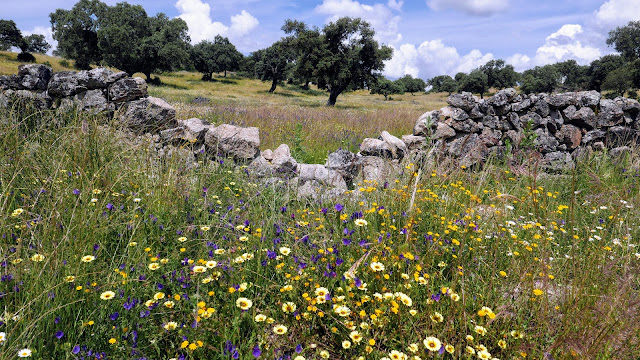 Today's stage was quite short, about 38km, and could have been combined with tomorrow's trip to Cáceres which is about the same length. There is not much to do in Alcuescar but it would have been a shame to have rushed the cycling. 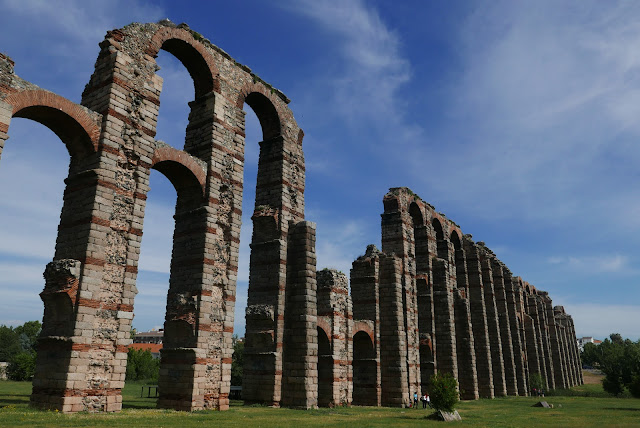 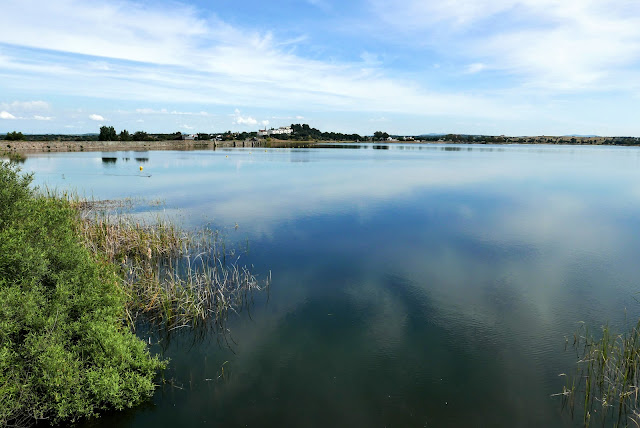 Before getting into the Dehesa the route took a quick tour to demonstrate how clever those Romans were. First you get to see the remains of the aqueduct which supplied the Roman city with water (the Visigoths couldn't get the plumbers needed to keep it working) and secondly the reservoir, complete with the original dam, which supplied the water to fuel it. The system provided 150 litres of water per second transporting water for 10kms with a descent of precisely 0.0005, or a metre dropped every 2km. 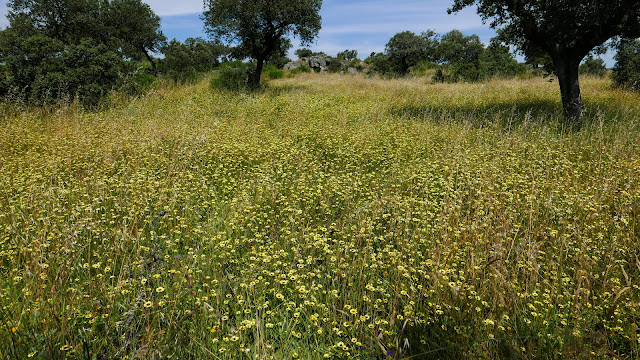 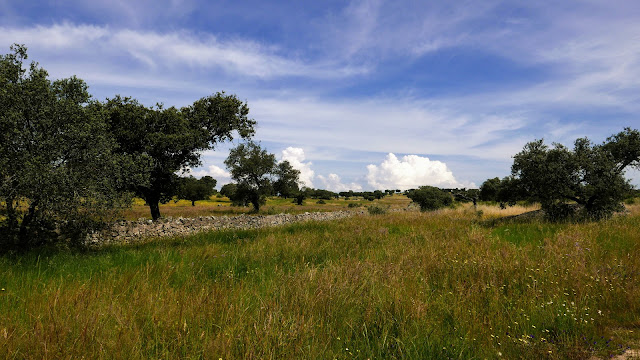 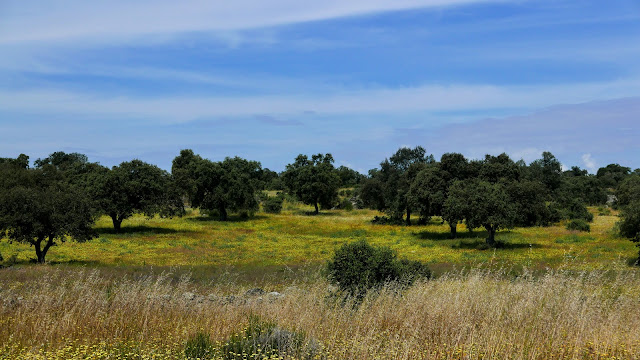 A couple of kilometres after the reservoir visit, the route leaves the road and follows a narrow green lane into the Dehesa. Although it's only three kilometres to the next little village (El Carrascalejo) it took an age to complete, I was stopping so often to try for the perfect picture. Definitely the prettiest bit of cycling so far. 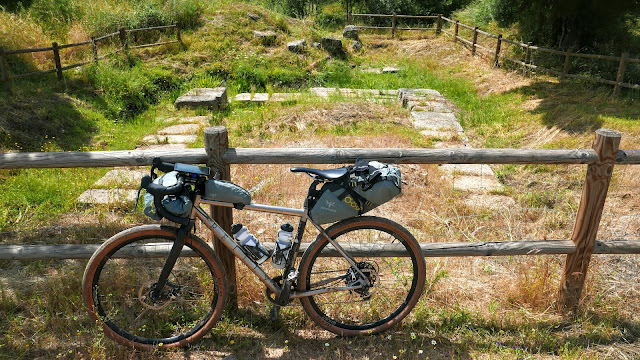 The Dehesa ended but happily returned again after Aljucén (coffee stop) where the route, following the Rio Aljucén, entered the Parque Natural de Emblase de Cornalvo y Sierra  Bermeja (snappy title for what is a sort of second tier national park). The remains of a Roman bridge demonstrates that this part of the Ruta Vía de la Plata was Roman, started in Merida and went north to Asturga, just to the west of Leon.


The Dehesa continued almost all the way to Alcuescar. There was 300m to climb along stretches of gravelly trail that just occasionally verged on the difficult. In the heat I was pleased to finish the cycling and reach the town.


I decided to eat early (it was about 2) and there were several bars doing food but to be honest I was just too shy, still in cycling gear, to go into the first one I came to. It was heaving in a way only Spanish bars in a small town can heave on a Sunday. It took me 30 minutes to find the accommodation which was hidden in a maze of narrow streets. There was no one about so I rang the owner's number and Victor, who was in one of the noisy bars answered. Despite the noise and linguistic incomprehension he managed to work out who I was and came over, let me in and then dragged me over to a bar and helped me order food. the bar was very entertaining. It was fun just watching the huge extended families sitting at long tables drinking and eating. The noise was intense, children were running everywhere, but despite this babies, perhaps deposited in the arms of a doting aunty, slept soundly. Adding to the noise, but not being watched, was a huge television, a ubiquitous feature in any self respecting Spanish bar. It was 4-30 when I left, well fed and with two large beers inside me. Asked if I would be coming back for dinner I said maybe, but don't think I will. An early night, English time, has it's attractions.
Posted by John Hayes at 7:10 AM

Email ThisBlogThis!Share to TwitterShare to FacebookShare to Pinterest
Labels: Cycling in Spain