It's Day 3, I'm in Mérida, a town famous for its Roman remains, after what has been an easy and very pleasant day’s cycling. The total trip was 65 km but the going was easy and basically flat and although it was off-road nearly all the way I was flying along. 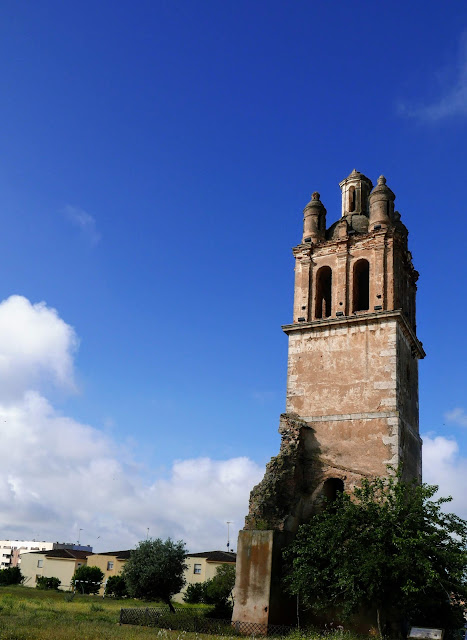 Yesterday's rain and mud hadn't done my bike any favours and it was complaining. Despite oiling the chain (supervised by Juan the hotel manager) the disk brakes, front and back, were squeaking as I climbed the hill out of town past the remains of an ancient church. I suspended the bike from a tree (Ian from Cranks in Brighton told me not to turn it upside down) but couldn't see anything wrong. Eventually the bike just forgot to squeak. 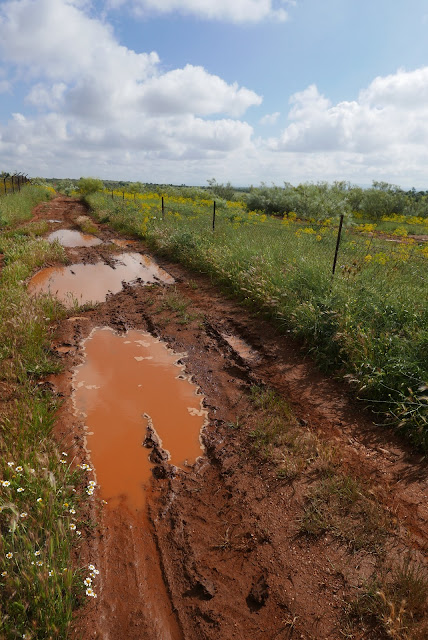 The first part of the route, to Villafranca de los Barras, improved once I’d got through the village of Los Santos de Maimona which was a bit messy on both sides and very wet in places. It's the same huge open landscape I experienced yesterday although vines were increasingly dominating the land use. I had to haul the bike over a railway line before the final approach to Villafranca de los Barros but have yet to see a train. 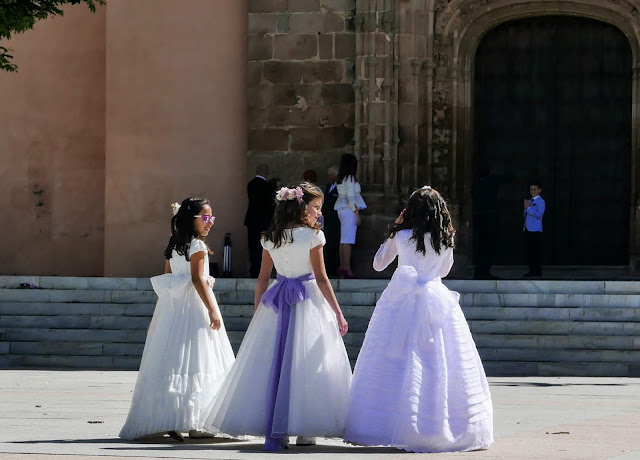 Once in the town I ended up in the same cafe we went to last year when I was doing the road route with Christine. This time it was a little warmer and there was entertainment provided by families celebrating their children being confirmed into the local church. Seeing lots of girls dressed as bridesmaids was a little weird but I like the photo. 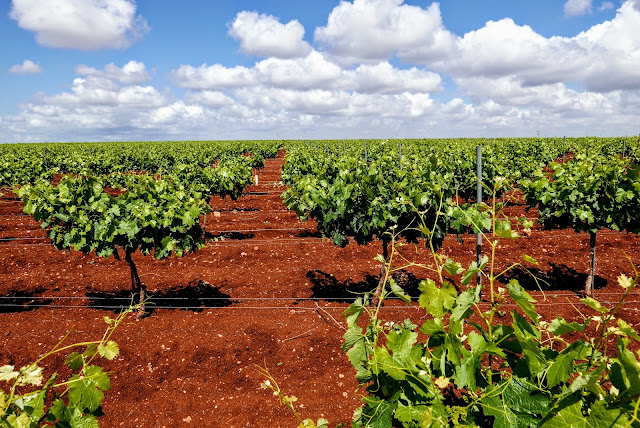 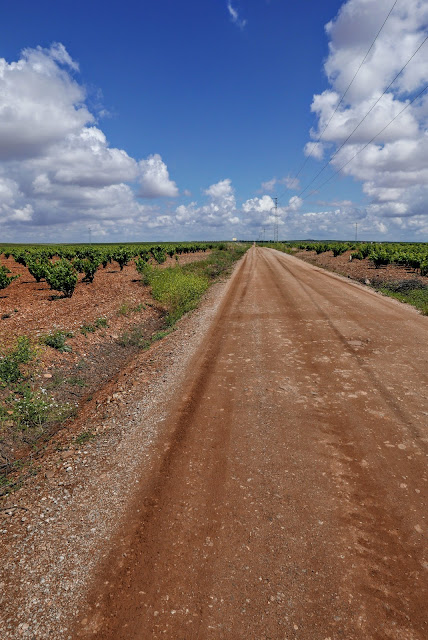 The next stage, a 26 km blast across what is possibly the world's biggest vineyard was one we did last year. Christine complained bitterly about it and couldn't understand why we had left the comfort of the N630 to travel on gravel. To be honest I don't have an answer and when my daughter Hannah did the Ruta later in the year she stuck with the road and it was fine.


On the gravel the big 47mm tyres on my bike made all the difference, it was very comfortable and despite the endless vines it was a really nice stretch of cycling. With the wind behind me I made it to the other end in about 70 minutes, a lot faster than the pilgrims who must spend all day completing what must be a mind numbing vineyard traverse. The route was damaged in places and they've clearly had a very wet spring here and, judging from the debris, patches of the vineyard had recently been under water.


At Torremáji I was determined to choose a different cafe to the one I went to last year. I failed and probably ended up eating the same food. 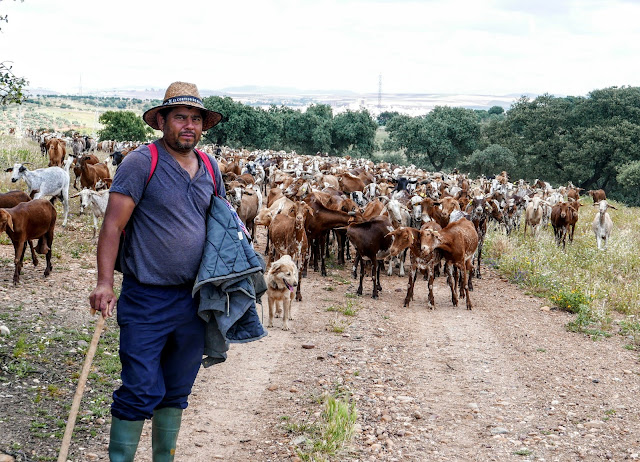 Leaving the town on the N630 reminded me how good this road is and when I had to leave it after about 5 km to join a muddy unloved track I missed it badly. Things did improve however when I discovered I had entered the valley of the goats. The shepherd in front of the biggest herd I'd ever seen said he had 900, a lot of goats to milk. Fortunately at the back of the herd, to help, he had an identical twin, exactly the same apart from a different hat. 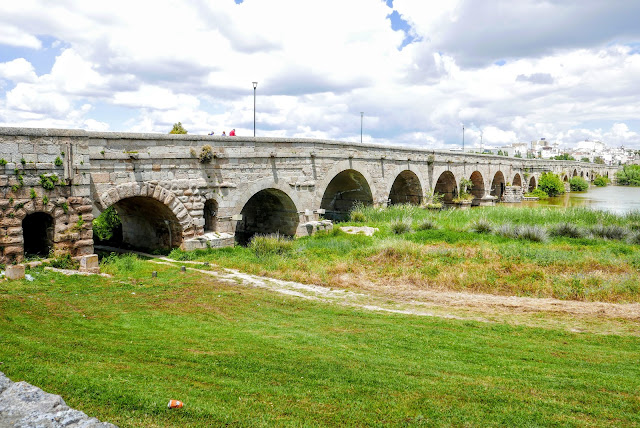 The other benefit of the off road route is that you enter the town via it's Roman bridge, the longest remaining Roman bridge in world, only half of which is captured in the photograph. 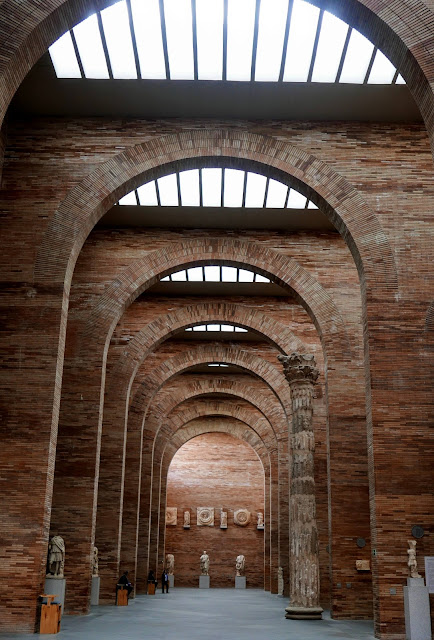 The Ruta Association have organised things for me here and I’m staying in great comfort in the Mérida Parador. Marta took me round the town's Roman remains and they are spectacular and having a local describe them was a wonderful experience. The museum is particularly interesting, a stunning building in its own right, the contents are well curated and very accessible. After dinner and back at the hotel, which was buzzing with wedding parties, I watched the Spanish enjoying the second half of the Champions League Final. As a Tottenham fan, I had mixed emotions. I was sorry after beating Real Madrid earlier in the competition that we weren't in the final, sorry for Liverpool and Salah, but pleased for Bale and his wonder goal. Bale, Tottenham made, can come home now.
Posted by John Hayes at 7:21 AM