Firstly a bit of context. When your travelling off-road in Spain without a guide you have no real idea what's around the corner. I have a route which is displayed on a map. The route was the best one I could find and the maps are the official Spanish ones. It's almost impossible to explain to an English person, brought up on Ordnance Survey maps, how bad the Spanish maps are. We are used to a path on a map being a path, a track being a track and a road being a road. These things don't apply in Spain where the maps are ancient. On the detailed maps motorways are not always there. So what looks like a track may turn out to have disappeared, be impassable or it may have acquired a lovely tarmacked surface. Particularly difficult to predict is when a track has become a “camino agricola” and has been given a nice gravel surface.


Unless you have a guide, cycling off-road in Spain is a bit of a gamble, particularly in the mountainous parts. Today I was ahead with my winnings, then I lost them all and was seriously behind and then, with one last desperate bet, ended up evens.


I had decided to split the 100km to Santiago de Compostela and stay somewhere cheap near a place called Lalin. Only 55km, so a nice leisurely start, no need to rush. Given the time I had, I was determined to stick to the off road version. 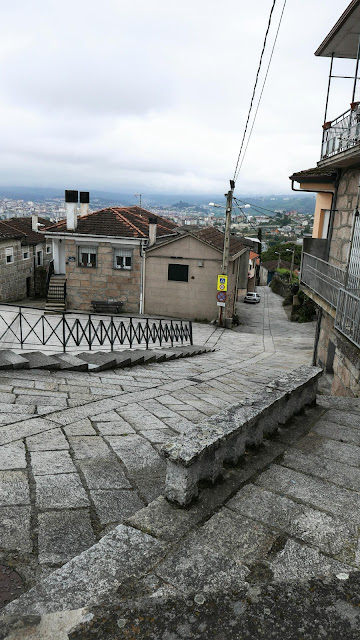 The first bit went well and after a stiff climb out of Ourense I followed a mixed sort of trail through a series of interconnected settlements, a bit suburban really. The route was clearly trying to keep me on some ancient route, a classic sunken green lane in places with some lovely trees. Some of these stretches were too uneven for me to cycle so I just got off and walked. 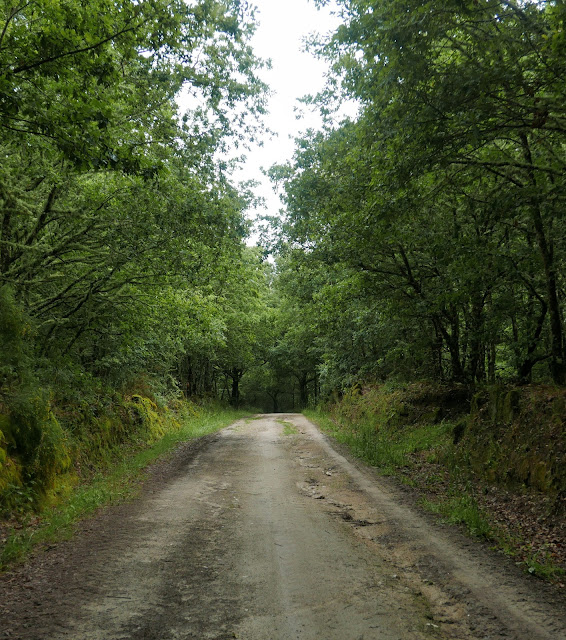 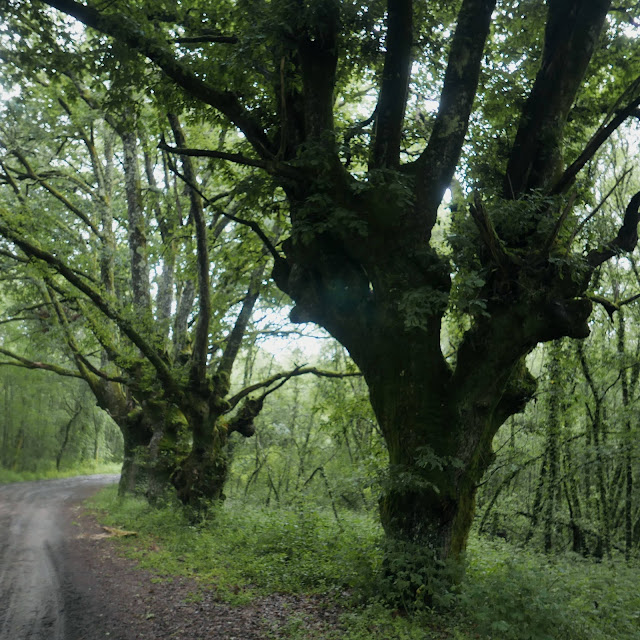 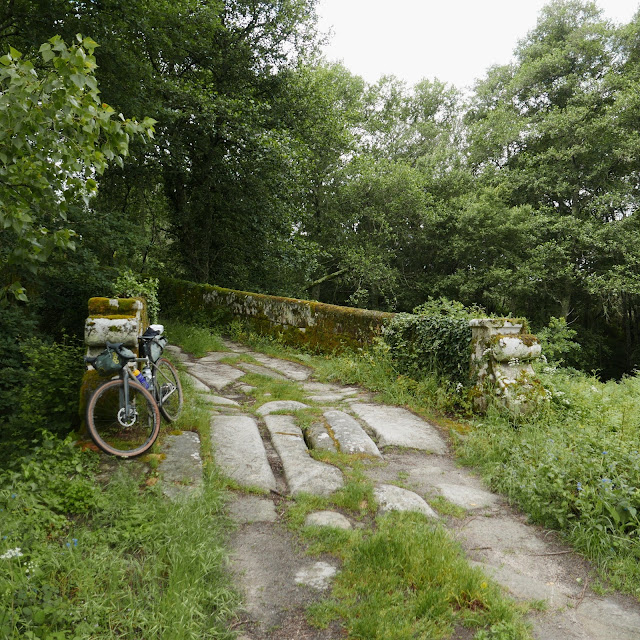 I had a sandwich in a place called Cea. The restaurant was preparing for a big lunch and Monica, who was doing all the work, was going nuts because her brother and her dad were a pair of useless lazy bastards. It was good fun to watch but to linger too long would have been intrusive so I set off to see the monastery at Oseira. 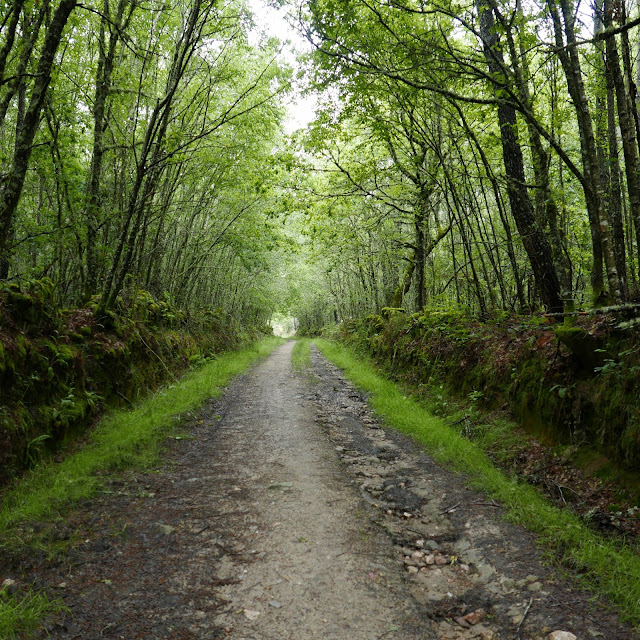 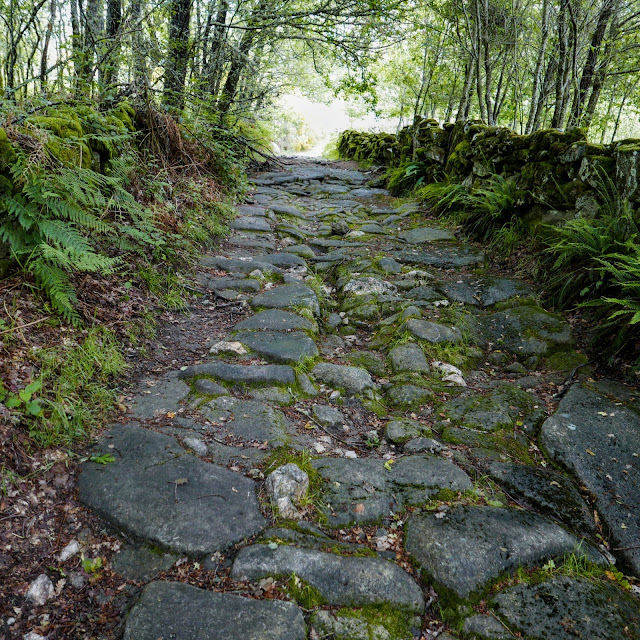 Getting there involved navigating a long, fairly level woodland trail, chunks of which were waterlogged and chunks of which were too uneven to be cycled. It took a long time to cover about 3 kms so it was a great relief when the path turned to tarmac for what was a final steep climb. Descending down to Oseira it started to rain hard, too hard to get any pictures of the Monesterio which looked a prison.


After waiting in a cafe for the rain to stop I set off again. The next stage involved visiting a series of tiny villages which seemed to have been abandoned by humans and left to the animals. The cows and dogs were not using their new found freedom in a responsible way and things were in a mess. After the rain it felt like I spent about 10km traveling very slowly along cow shit alley.


Believe it or not it was now over 5 hours since I left Ourense and the middle of the afternoon. After slow progress it was great then to suddenly escape the animals and hit the N525 for some fast cycling. After 10km I turned off for the last 5 km off-road before arriving at the place where I expected to find a hotel.


It then started to rain, rain really heavily. For the first time I could feel the water running down my back somehow getting through the neck of my waterproof jacket. My camera and phone were in my back pockets so when I saw a pilgrims shelter I grabbed the chance to get out of the rain.


It was a deluge, a sort of tropical storm, and by the time it finished, 45 mins later, I was frozen and everywhere around me was covered in water. To get warm I set off at speed only to discover that the path I was following, fortunately a wide agriculture path, was heading downhill fast. It was hairy, keeping the brakes hard on but being careful not to lock the wheels, while avoiding gulleys that had already formed as the water rushed down the track. The drop was about 150m but it seemed a lot longer. 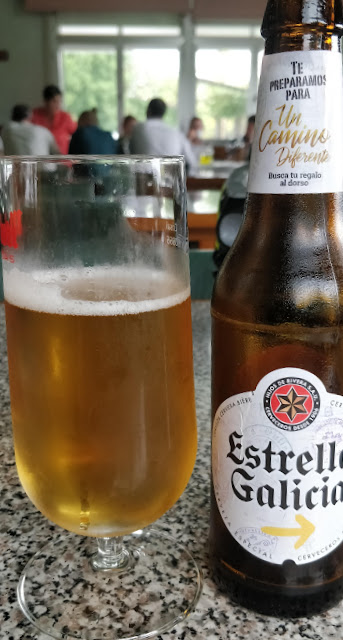 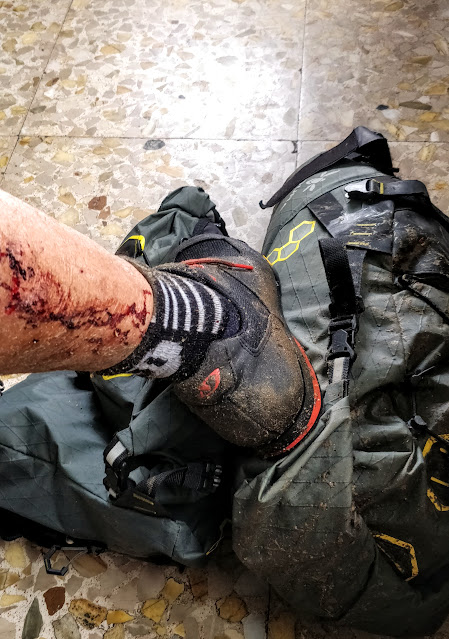 Needless to say I survived but I was in a bit of a mess, covered in mud and had somehow acquired a bleeding leg. The woman at the hotel, who was managing the end of a big drunken lunch party (it was nearly 5 o'clock) hesitated before she admitted she had a room and then couldn't have been nicer. After bringing me a beer, she told me I should eat something and bought over a plate full of ham and particularly nice creamy cheese. Given the places I've been to today, I've a fairly good idea where the cheese came from.