I’m in Ourense, in a very nice hotel, with all my washing done and things drying nicely. After two days on wet, muddy paths everything is starting to get unpleasant. I've got a family suite so the bike has its own room, I'm tempted to put it in the shower.


Yesterday was grim but despite dreadful weather today, I've managed to get the miles in and feel good.


My decision not to cycle onto Laza last night was definitely right. It was a tough first two hours today with a long descent along a badly surfaced road. It was not the trip to contemplate if your knackered. 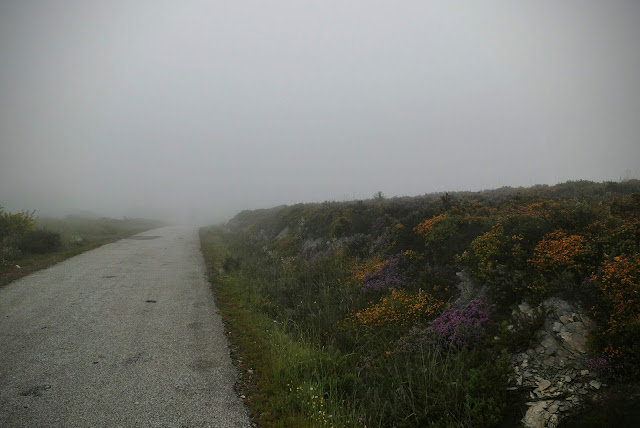 I set off this morning into thick fog. Now I don't carry a lot in the way of illumination so some would rightly tell me that I was being irresponsible. My only defense is that there are hardly any cars. I saw three in the first hour including one I saw twice. 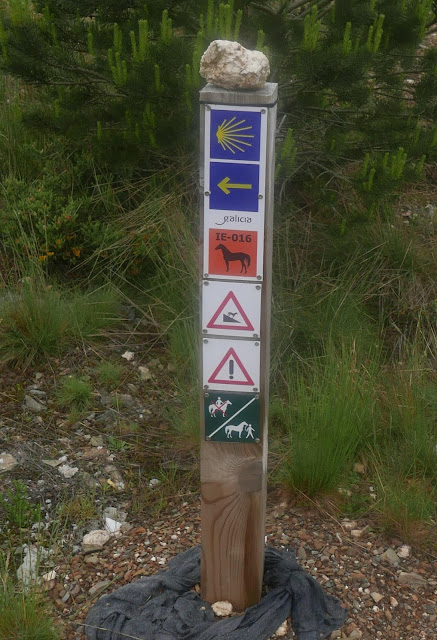 For the first 15 km the route stayed on a road.  At a junction I had to decide whether to continue on the road or follow the Camino into a potential abyss. There was a sign saying that the descent was steep, that if you're on a horse you should dismount and lead it. That was enough for me, if a horse can't do it on four legs than I can't do it on two wheels. I descended on the road to a place called Campobeceros where a chat with some pilgrims suggested I'd made the right call. 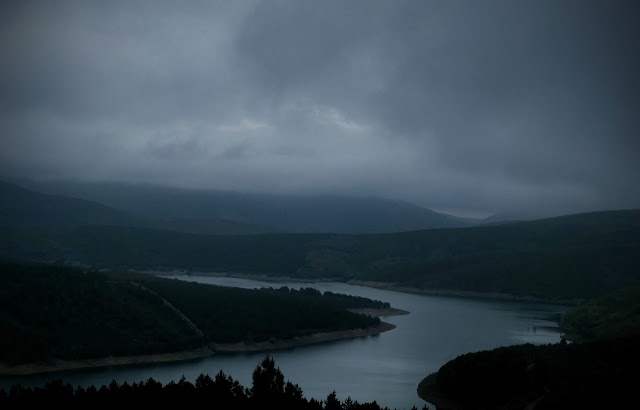 I stayed on the route down to Laza (half of it was on a road) and although there was a long stretch of steep gravel it was just about OK.


After coffee and toast I set off again. It was now raining heavily and I had to decide again, on or off road. In the rain it wasn't a difficult decision, I'm coming back this way so I can check out the off-road version if the weather's better, but I can't see many people wanting to do a 400m climb on a broken surface. 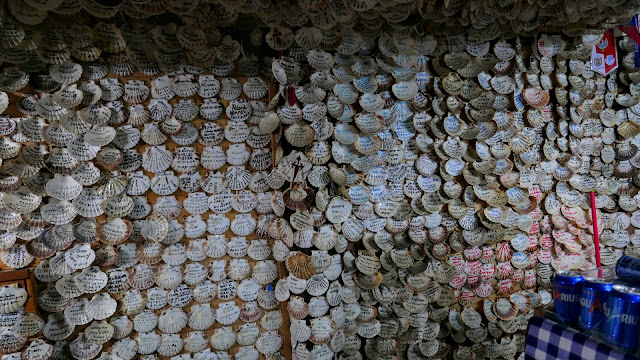 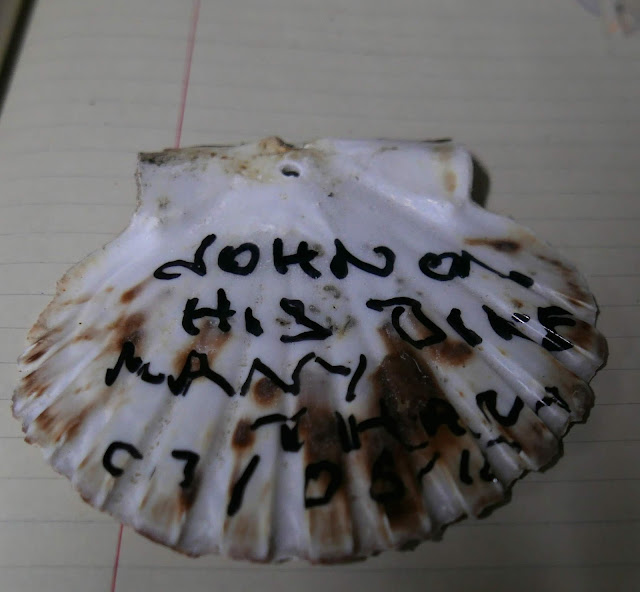 Forty minutes later I was at the top, where in a place called Albergueria there was a flag bedecked albergue with a sound system blasting our Johnny Cash songs. I was wet and frozen and dived into what turned out to be a friendly place. It was run by the “four amigos” whose main job was to anticipate each others wine requirement. They made me a massive bocadillo (cheese and tomato, my standard but frowned on by the Spanish) while I tried to warm up. The room, the walls and the ceilings, was covered in the traditional St James Way scallop shells and I was made to sign one before I left. It was a pathetic effort, I couldn't really feel my hands. 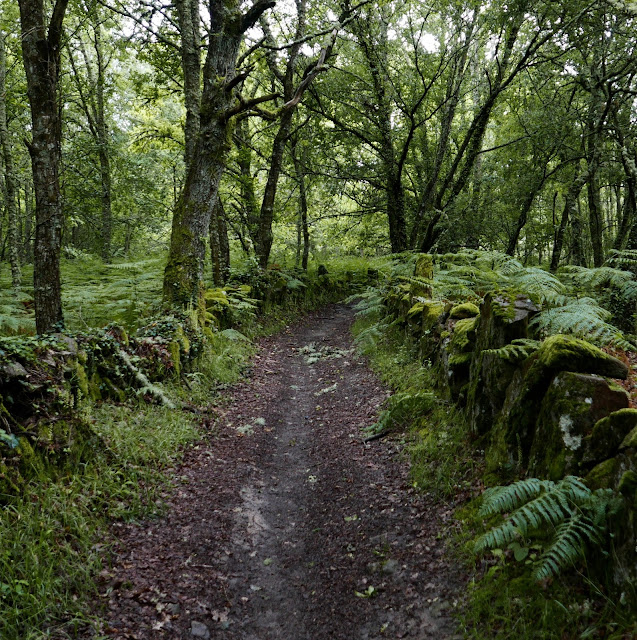 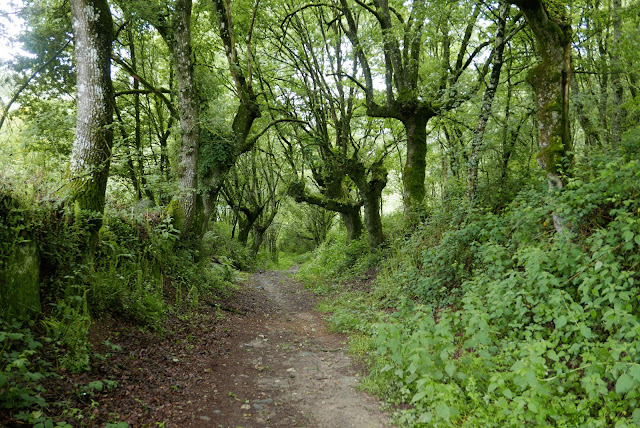 The descent was payback time and again I stayed on the road and with the rain stopping I was dry by the time I got to the bottom. After following a flat gravel path than reminded me of those easy days in Extremadura there was about 10 kms of nice off-road, a little challenging in places, but doable. The off-road route then joined the road and the day finished with a wonderful 17km descent into Ourense.


I've got 100 km to go to get to Santiago del Compostela. I probably slightly ahead of schedule so tomorrow I'll take it as it comes. If I don't make it in a day it doesn't matter. What is clear however is that this part of Spain is very
hilly. Those hills I came down on the way to Ourense are going to be hard work when I go back. 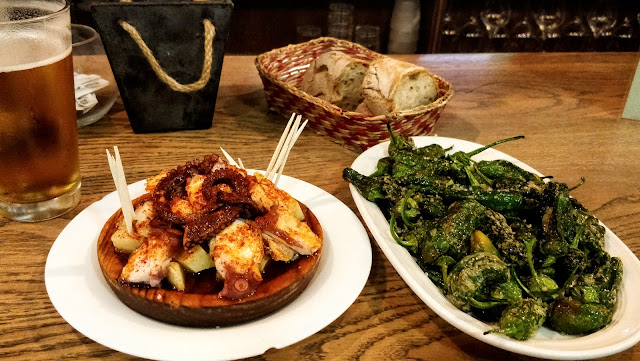 I didn't do much sightseeing in a wet Ourense and couldn't find a craft beer bar.  Hopefully I'll do better on the return trip. The tapas here though is very good and I had what I have at least once in Galicia, Padrón Peppers and Pulpo.