In July August 2018 walked for 6 days along a section of the Alpa Adria Trail. Apart from some crap information from the tour provider and a nasty reaction to a wasp sting we had a good time.

Christine has developed a deep interest in all things to do with the Italian Front in the First World War. It was initially triggered by a trip we made in 2005 along the Alta Via 1when we saw for the first time the extent of the wartime remains in the Dolomites. After two trips along the Karnischer Höhenweg (2012 and 2016), and helping me write a Cicerone guide to that route, she was keen to complete the experience with a visit to the Isonzo Front and a walk along part of the new Alpe Adria Trail.

Having seen the front in the Dolomites and in the Karnischer I had assumed that things would be different in the east and that the fighting would make more sense. It didn't and just as on the rest of the front the chances of the Italians ever shifting the Austrian-Hungarians from there mountaintop positions were so remote as to make it impossible. Although the mountains aren't quite as big as elsewhere the key ones (Mt Krn) were still well over 2000m.

Of course the Austro-Hungarians also had it tough with supply lines through the mountains. As well as help from the Germans, and the gas, the thing that enabled them to finally beat the Italians in the mountains was the construction of a road (using Russian PoWs) and we followed it on our first day.The total Alpe Adria route is 43 stages and starts from the foot of the Grossglockner in Austria, the highest mountain in the eastern Alps, and finishes at Trieste on the Adriatic. It's been put together jointly by the Tourist Boards of Austria, Slovenia and Italy in partnership with alpine clubs in each country. A dedicated website describes the route, identifies accommodation and provides downloadable GPX trails.

We walked six days from Kranska Gora on the Slovenian / Austrian border through to Cividale del Friuli (4 days in Slovenia and 2 in Italy). We flew into Llubijana, caught a bus to Kranska Gora the next day, and flew out a week later via Venice. Christine booked the trip with a UK based agent who then subcontracted to a local agent. They booked the accommodation and organised a bag ahead service (which seems to be available for the whole route, a big attraction for people who don't want to carry their own stuff).

The walking was not that demanding and was never above the tree line in a sustained way. As things turned out this was lucky because the weather, as July turned to August, was incredibly hot and humid and shade was essential. There were also numerous opportunities along the trail for river dipping which Christine in particular grabbed at every opportunity. The trail itself, often based on old military roads, was generally excellent.

Four of the six days followed the Soca River (called Isonzo in Italian) along a lovely valley. It's very popular and the campsites along the route were packed with visitors from all over Europe enjoying the water. If you want remote quiet walking than don't visit this part of Slovenia in July or August but if you enjoy seeing people having a good time then this is the place to be.

The big disappointment was the service we got from the agents. The information provided was limited, often wrong, and on the first two days resulted in a lot of extra walking.  We booked with Natural Adventure Company and they used Helia as the local agent. Both companies claim to have walked the route, but if they did the experience wasn’t reflected in the notes they provided. In addition, while we got to see some First World War remains, full immersion would have involved following the Friuli Venezia Giula section of the Peace trail - maybe another time.

Stage 1 involved a lovely walk over the Vršic Pass to Trenta.  Generally speaking the route following an old military road which had been built specifically to resource the final battle on the front in 1917. The road had been built by Russian prisoners of war. To commemorate the loss of life in an avalanche they also constructed a lovely little chapel, in Russian style, half way up. The pass itself was heavily fortified with a huge concrete bunker that looked like it provided accommodation for a big gun.

Our frustration with the information provided started on the descent when we discovered that the GPS trail (apparently the Natural Adventure Adventure Company got it from the Alpe Adria website) was wrong, directing us down an impossible gulley.  We followed the waymarked path instead (the paths are waymarked but not as well as they are in the Alps in Austria, Germany and Italy for example) along an old military road but missed a turn-off, which went into trees, and followed the road until it fizzled out.  Fortunately the terrain wasn’t steep and we managed to recover the trail without too much effort but it could have been dangerous.

The next information-failing was destination.  The little booklet provided told us that the end of the stage was at Trenta and the address of the hotel we were staying was in Trenta.  It was only when we got to Trenta and after googling the address that we discovered it was 6 kms back up the trail. Luckily we managed to hail a bus for part of the return journey but we had ended up walking 22km rather than the advertised 14km. Despite nice accommodation we were pissed off.

Day 2 took us along the Soca Trail which follows the stunning Soca (Isonzo) river, the highlight of which was a stretch along an amazing limestone gorge. The phrase “Europe’s Playground” perfectly describes the Soca valley with the campsites (not too large but all full) crammed with visitors from every corner of the continent. The Dutch, as usual,  were over-represented - the country must be empty in July/August. It was a very hot day and Christine doesn’t need a lot of encouragement to get in the water but even she, hardened by the English Channel, found the meltwater-fed river cold. 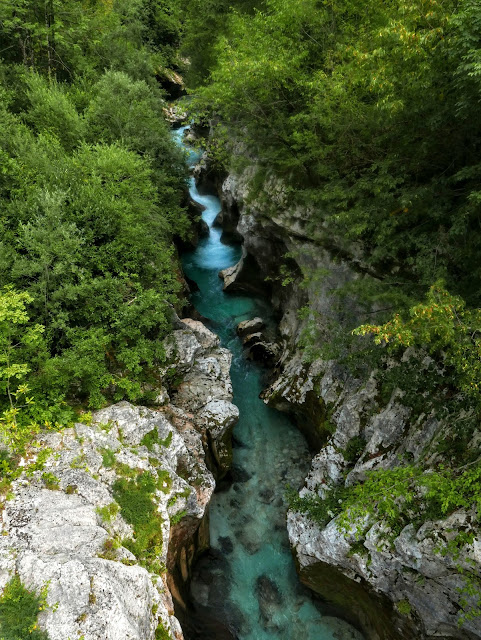 Today’s information failing was a hangover from yesterday.  The schedule assumed we started in Trenta, not 6km up the trail, so instead of the advertised 22km we had to walk 28km, not good news in the heat. It meant we didn’t have the time (or inclination) to visit the little First World War Museum in Bovec, but as this ‘highlight’ was not signposted it is doubtful we would have found it anyway.

Today Christine found the perfect place for a swim, the pool underneath the Virje Waterfall, in water which has just popped out from underground streams emerging from huge limestone cliffs above  It was just a little too hot to bother walking up to the second waterfall, the Boka, which is Slovenia’s biggest, but we did see it in the distance. The walk was 23km, very pleasant but with a little bit too much road walking for my taste.  Dreznica is a stunning little mountain village in a valley underneath the Krn mountain, a towering vertical lump. The limestone plateau around Krn was the location for some bitter fighting on the frontline, with galleys carved into rock, some 85m apart.

Today we joined the Slovenian Peace Trail, a cousin to the Carnic Peace Trail on the Karnischer Hohenweg.  The notes and the website make a lot of this trail but in reality, the route only follows it a for a short while and misses what is perhaps the most important bit on the plateau around Krn. Most of the walking was on old army supply roads in mixed forest, normally not something I’m a fan off, but the trees were lovely and provided some very welcome shade.   We also got to sample the Slovenian version of apple strudel, very interesting, a nutty apple filling in a thick pasta case.

We ended the afternoon back on the Soca with a swim in the river, fast flowing and by now slightly warmer, and where - swimming hard against the current- you could for a few minutes just about stay in the same spot.

This was an eventful day. After a big, hot, 1000 metre climb we at last got to see some First World War remains at the open air museum on Mt Kolovrat, heavily restored but really interesting.  Part of the Italian’s third line of defense, it’s capture meant that their position in the last engagement on the Isonzo front became untenable. 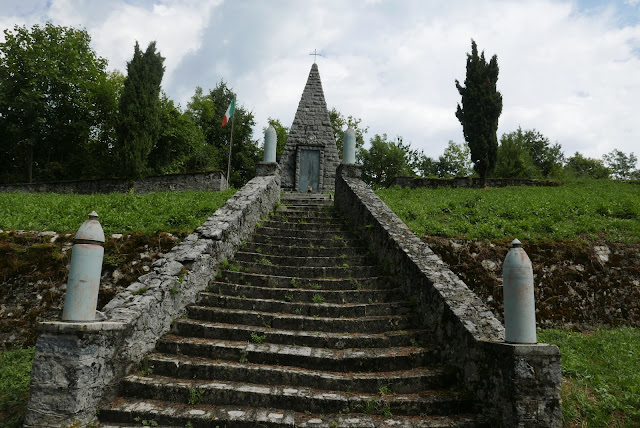 The final assault on the front was led by Rommel who, of course, went onto even greater things in the 2nd World War.  It’s a very interesting museum with the original tunnels carved out of the mountain side still intact. These tunnels proved a death trap for the Italians whose poor quality gas masks didn’t save them from the poisonous gas used extensively in the final Isonzo battle.

Shortly after the museum we crossed the border into Italy where there is a poignant memorial to the first of over a million and half Italians who lost their lives in the first World War.  There is also an excellent Refugio where we enjoyed a perfect plate of pasta and wild mushrooms.

Continuing through trees along a beautifully graded military road, with lots of fortifications dating back to the conflict, I was stung by a wasp and minutes later discovered I had developed an allergy to wasp stings.  I suffered a very frightening reaction which probably means I’m going to keeping myself indoors from now on every time there are wasps about.

After an uncomfortable night, and an arm that was expanding at an alarming rate, the fact that the last day was spent walking mainly downhill and in trees was good news.  The medieval pilgrimage town of Castelmonte was perfectly located for some more mid-day pasta (and a glass of amazing sparkling white Ribolla wine: grown-up Prosecco) and marked the point at which the walk tipped decisively into the Friulian lowlands. From there its was an easy walk down to Cividale del Fruili, a small but perfectly formed town where we spent the evening and the following morning learning as much as we might ever want to know about the Lombard Kingdom of Italy. Overall it was a very pleasant, relatively easy and delightfully varied 6 days walking. With hindsight we would recommend doing this in late spring or early autumn to avoid the extreme heat: but do pack a swimsuit.