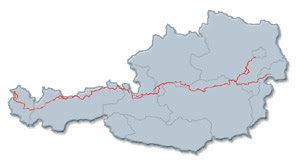 The Nordalpine Weitwanderweg 01 looks like the toughest part of the walk and getting there early enough is a key consideration to the planning of the whole walk. To get an idea of what it's going to be like I'm doing a test run in July (with Christine, my wife). We are going to walk east for eight days starting at Bregenz in the middle of July.
The NordaplinWeitwanderweg 01 was opened in 1975 and is the first Austrian high trail through the eastern Alps. In the highest Alpine stretches it gets close to 3000 metres so the weather needs to be good for it to be safe. The Lechtal Alps, which are at the eastern end, the bit we will nearly complete in 6 days, is the toughest part of the walk. Christine and I have walked the Haute Route from Chamonix to Zermat and the Alta Via 1 in the Dolomites so I'm hoping we can cope with this.
The plan is to stay in huttes. Although we have had lunch in the Austrian huttes when we have walked there before we have never stayed in them. We have stayed in the equivalent in France and Italy and while the food was always good the accommodation can be interesting to say the least. In one French Hut it was a three layered bunk system with three people (mixed company) in each layer - very cosy but not much sleep. Funny thing is we have now sleep in some pretty extreme conditions, particularly in Nepal and Kazakhstan (in a tent on a glacier at 5,200 metres) but somehow you feel the discomfort more in Europe.
Getting there involves a flight to Zurich, from London, and a train to Bregenz. Bregenz is on the shore of Lake Constance (Bodensee in German) and the borders of Switzerland, Germany, Austria and Liechtenstien. It looks like a really nice place and we should have plenty of time to relax and have a nice meal before we disappear into the mountains the next day.
The daily walks are based on the schedule from the Austrian Alpine Club checked against the map. There is a guide book but it's in German. The Austrian Alpine Club website also has a hutte finder which describes the huttes and usually gives an estimate of the time needed to walk to the next hutte. Aligning the proposed schedule with the walking times is a bit of a challenge and I guess we'll need to flex the plan a bit when we actually get there.
Where to start is the first challenge. The first suggested stop is Freschenhaus which looks like a long way from Bregenz. Rather than waste time walking through Bregenz and then Dornbirn it looks like the best thing is to join the 01 at Dornbirn. On that basis the walk to Freschenhaus is about 8 hours long with a climb of 1,500 metres. The penultimate part of the walk involves climbing over Hoher Freschen at 2004 metres. A good first days walk!
The next day involves a relatively flat and, on the map, not particularly long walk to the ski resort Damuls. Will be lots of places to stay so can work out where a bit nearer the time. Damuls is approximately 400 metres below Freschenhaus.
Day three involves a climb up to Biberacher Hutte. It doesn't look a very long walk, nor does it involve an enormous amount of climbing, but it does look exposed. In particular it involves a climb to 2013 metres over the Hochshere followed by what looks like a brilliant walk along the Hochshereweg. The Biberacher Hutte looks nice, has separate bedrooms as well as dormitaries. Guess what we'll ask for for!
The next day's walk involves what is supposed to be a 16 km walk to Goppinger Hutte. The walk starts with a drop of about 350 metres down the Furggeleweg and then up to a pass at the side of the Hochlichtspitze and then onto Goppinger Hutte. I guess if you get there early you then have the option of retracing your steps slightly and climbing the Hochlichtspitze which at 2600 metres is 350 metres higher than the hutte. Again the hutte looks nice with separate bedrooms. If you got there really early you could always try and get to the next hutte.
Day 5 is a short 4 hour walk to the Ravensburger Hutte which is supposed to be 4 hours from Goppinger.   You could try and do the next days walking as well as it's only  another six hours to Stuttgarter Hutte which is the next day's walk. It is however a bit confusing in E4 terms because after Ravensburger there is an 01 variant, with the route referenced in Austrian Alpine schedule taking you to Stuttgarter on the variant and the E4 on the main 01 route taking you the long way round. To make matters worse the Austrian Kompass maps don't align and the bit with the Ravensburger is on tiny bit of third map which I haven't bought yet! Sounds ominous and sounds like a good reason to do a short walk on Day 5
Day 7 looks like a lovely contour walk travelling 2500 kms above valley and looking down on St Anton.  The last overnight stop in a hutte is at Kaiserjochaus.
The last day involves a walk down to Flirsch, probably with lunch on the way at the Ansbacher Hutte.  The last night will be in a Hotel in Flirsch then a train on Sunday back to Zurich.
Posted by John Hayes at 10:56 AM