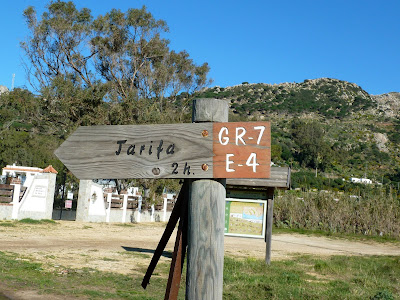 Hannah my daughter commented on yesterday's blog that it was typical of a Hayes not to know it was the Andalucian bank holiday; a bit hard but she has a point. We are a bit forgetful and in particular, often miss the obvious. Had a case of that this morning when I looked at my iPad clock and, because I hadn't changed it from UK time, didn't notice it was an hour late. So despite having persuaded the hotel to do an early breakfast, I didn't actually leave until 10am a bit late for a 35 kilometre walk. In the end I arrived at Los Barrios at 7.15pm, which given that they don't serve dinner until 9, wasn't a problem.
Great walk through a large natural park with a cork forest. Loads of wild life, in particular birds, and there was a large party of birdwatchers along the route. Everything is very green and the weather, which remains sunny, shows everything at its very best. A lot of wind turbines in the first third of the walk - not everyone's cup of tea.

The only moan I have is that the paths, although not metalled, are made to be accessible by vehicles. It wasn't that I saw many, I saw a couple, it's just they they are a bit hard underfoot. The last bit, into Los Barrios, was 6 kilometres along a road proper and my feet were on fire by the time I got to the hotel. 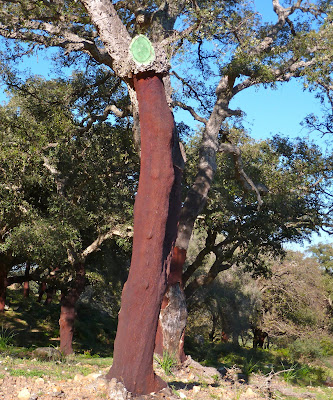 I am knackered tonight but critically have no blisters on my feet. Have another long day tomorrow, with a brilliant hotel at the end of it, and then it's a short day. I'm trying not to think about the whole walk, it's just too scary. I'm going to "take one day at a time".