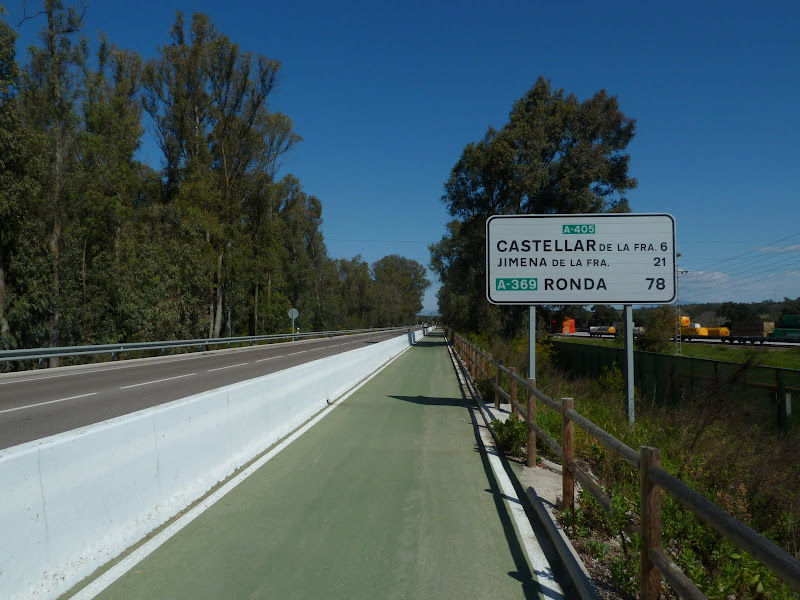 When it's a sodding road.

So firstly the moan, most of the route from Los Barrios to Castillo de Castellar is along roads. There are a few bits where you leave the road but you come back to it very quickly. Frankly this is disappointing for a premier national trail, the GR7 and for the E4, it's just not good enough. Can't moan to much as a bit of it is definitely down to my reliance on a GPS trail I found in Wikilocs . It may be that the person who published it was a cyclist and preferred roads. I definitely missed some of the off road bits mentioned in the GR7 Cicerone guide, but even that acknowledges that most of today's route is road based.

Apart from the bit near the rubbish dump at the beginning, most of the roads were at least empty. Walked along one stretch for a hour and saw two cyclists and one JCB earth mover thing which looked like it was there to repair the roads.

What made walking along the roads particularly annoying was that the countryside was great, with lots of what looked like farm tracks. This is however also serious cattle country and the fences and signs look like they are meant to keep people out as well as cattle in. My brother's a farmer, and I do listen to Archers, but in return for the bucket loads of cash they get from the rest of us, they can at least make sure that people who want to walk can actually get the other side of the fence.

My favourite song by the way is "This land is my land", of course prefer the Woody Guthrie original but Bob Dylan's and Bruce's versions are also bang on.

I guess the really big news of the day is that I met my first walker, Juan Holgado who was walking from Ronda to Tarifa. Juan seemed like a very nice man and spoke good English (studied in English in Exeter in 1968, must have missed everything), but was not impressed when I told I was going to Budapest. I even emphasised the point that it was the Budapest the capital of Hungary, the other side of Austria, but still no reaction.

Juan is a serious walker and yes we actually exchanged website addresses. His is http://www.jaholgado.com/

Some people have unkindly suggested that I will walk from one end of E4 to other without talking to anyone, so talking to Juan was a real break. I have proved the unkind people wrong. It now means I have now got my talking to people bit out of the way and can stay plugged into my IPod for the rest of the journey!

Walking with the right sound track is like watching a film. Today I really did watch two eagles circling over my head while listening to that "tiny hands are frozen" bit in La Boheme - perfect.

Anyway walking along a road is not all bad news. It did mean that I covered the ground very quickly. Leaving just after 8, and stopping for omelette and chips at 12, I got to Castillo de Castellar by 4 in the afternoon. 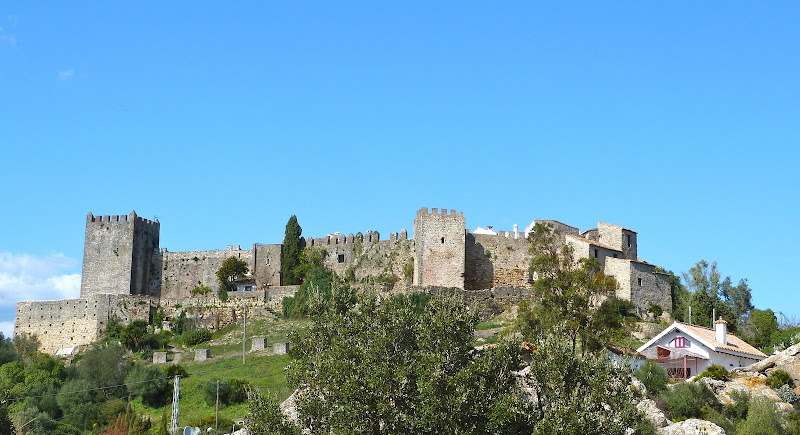 Castillo de Castellar is the first of many fortified hill top towns I'm scheduled to visit. It is a stunning completely walled town, very small but with lots of little artisan shops and tiny houses for weekly lets. I'm staying in an amazing hotel. It's not mentioned in the Cicerone guide but is essentially a conversion of the castle. The room I'm in (101) is long and thin, three windows facing south, two north and a balcony facing east. Although there are rooms above me it feels like I'm at the top of castle and the views are amazing, down to Gibralter in the south and over to Ronda in the north east. Should be brilliant in the morning with the sunrise. Haven't eaten yet but based on location alone would definitely recommend it to others. To be honest it has really made me miss Christine, she would love it, and it should be shared. 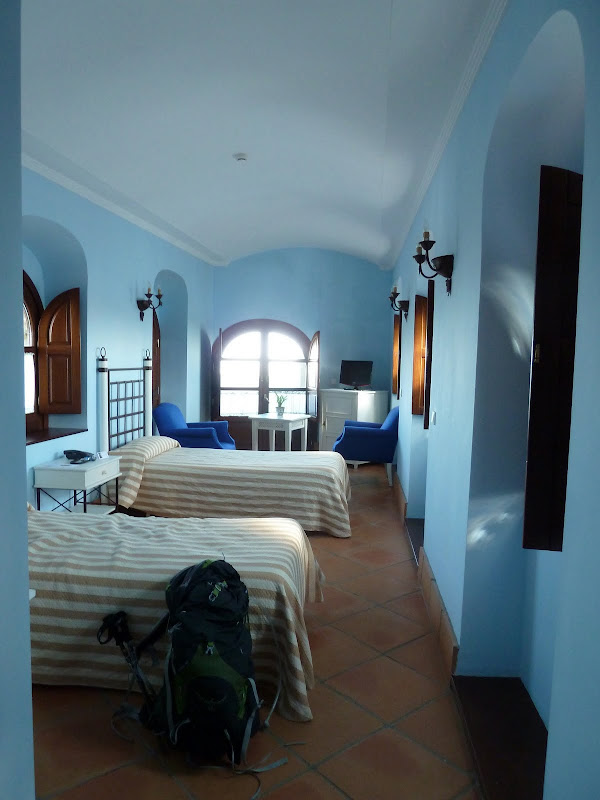