After some fairly dull walking, and some fairly dull weather, things took a dramatic turn for the better today with perhaps the best day's walking of the trip so far. Finally escaping the olive trees and getting over 1500 metres for the first time, today's walking combined great views and some tough walking, with absolute solitude (apart from Christine).

Faced with a 35 kilometre walk and just under 1300 metres of climb we needed an quick start. Unusually the bar opened early and by the time we got down at 7.45 there was already a crowd drinking coffee and brandy, very civilised. We passed on the brandy but had a plate of ham and cheese with bruschetta, two cups of cafe con leche and were well set up for the walk.

The weather was cold, dry and overcast, it looked like rain, so nothing to encourage taking in the scenery. As it was the first 90 minutes or so involved a march along the road, up the valley, past the small village of Los Rosales and on towards the 1600 metre mountain of Paredon which was decked out in wind turbines. The metalled road by this point had turned into a track. 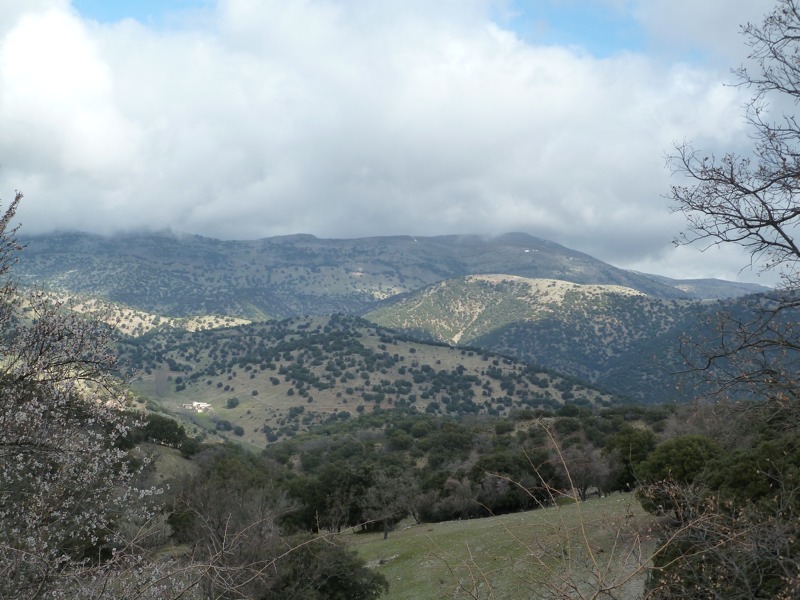 Passing a series of ruined farmsteads we eventually climbed to about 1200 metres and contoured around the north side of Paredon. Not a olive tree in sight, the views were now amazing, very remote grazing countryside with bits of snow scattered around the tops of the mountains. The weather was also getting better. 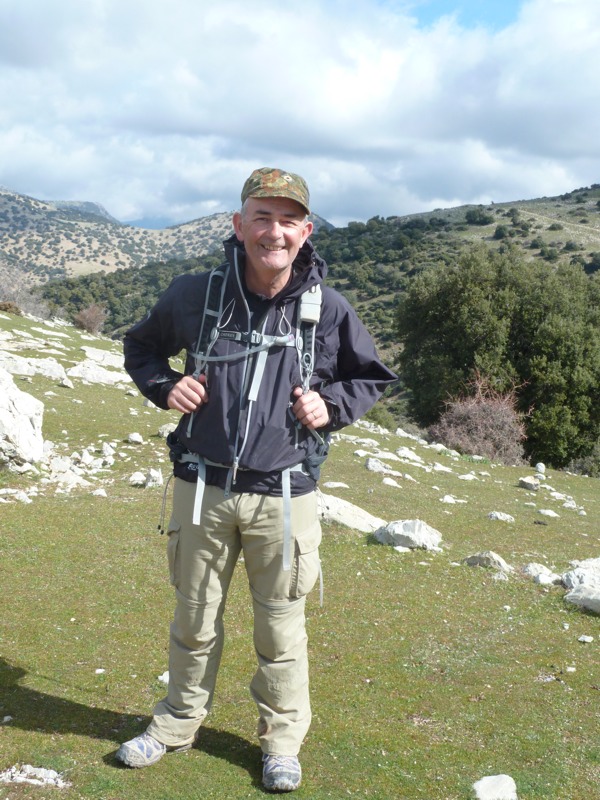 After a steady climb up to the pass at 1500 metres, down through scrubby woodland to a farmstead, Cortijo Los Alamillos, and following the Rio Valdearazo down the route takes you along a forest trail through a valley/gorge for about 7 kilometres. The sky was now virtually cloudless and the scenery almost alpine. There was a shepherd at Cortijo Los Alamillos and he was the only person we saw on the entire walk. 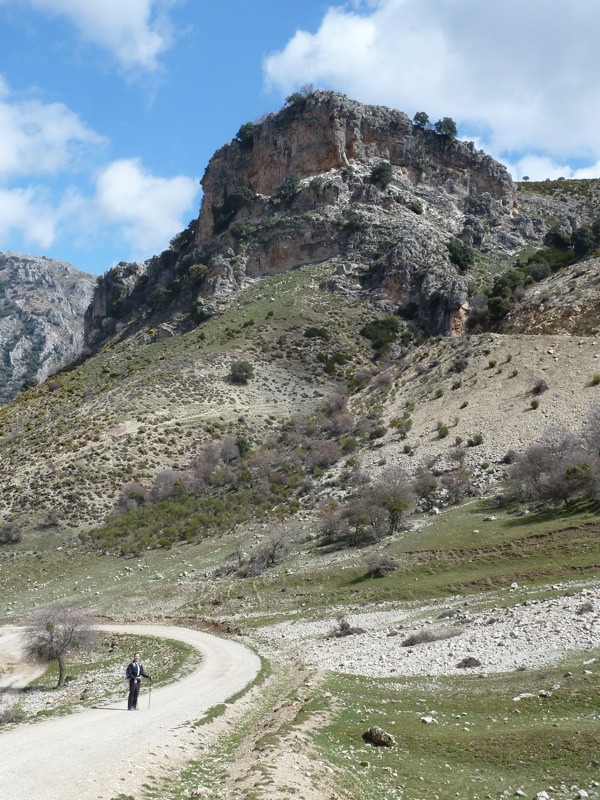 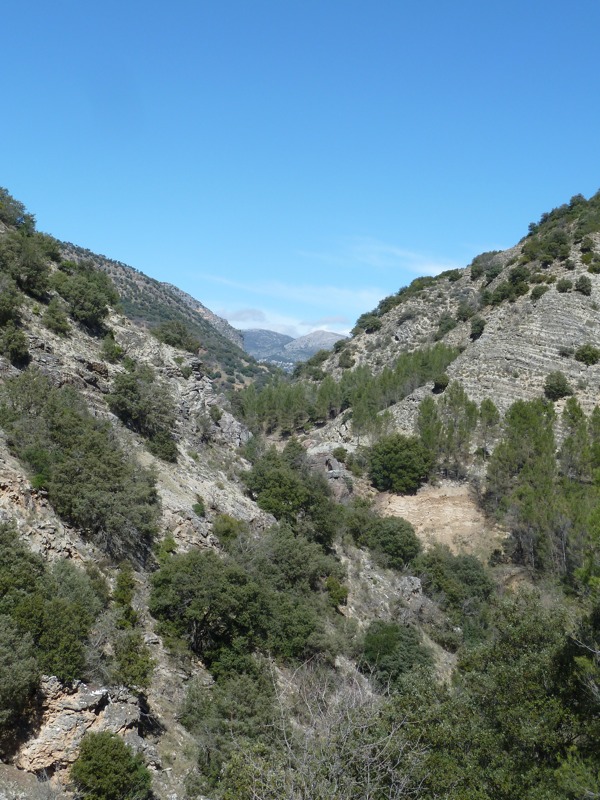 To be honest all this would have been enough to qualify the walk as really good but a huge dollop of icing was about to be placed on the cake. The GR7 continued along the gorge but left the trail and the gorge became much more dramatic. The big sandstone cliffs, wind eroded and forming strange shapes, were now casting dark shadows across the path. The river flowing into this darker, deeper gorge, seemed to be flowing in the wrong direction. 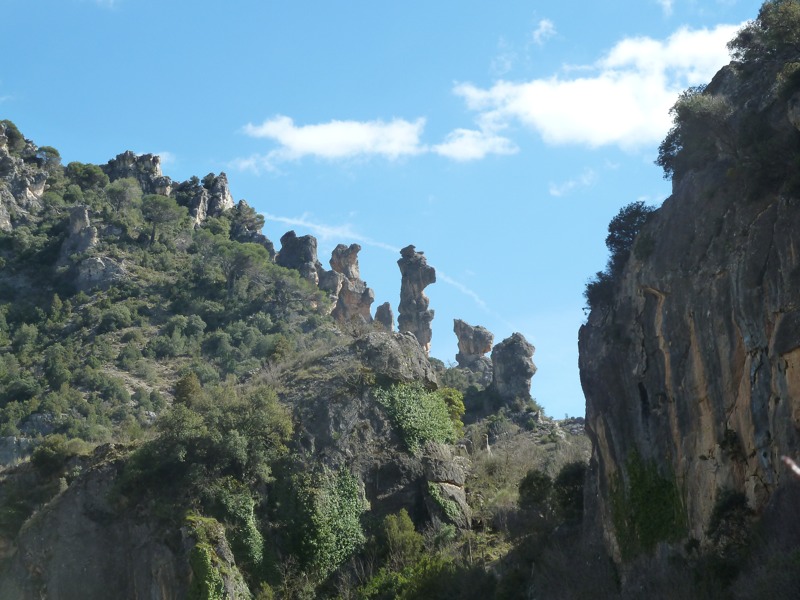 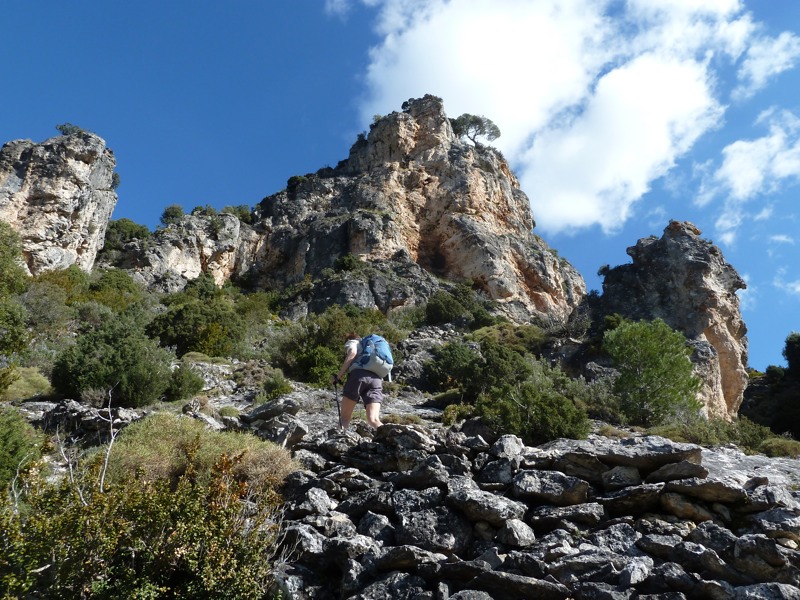 Having walked alongside the river for a kilometre or so, the path suddenly takes you across it and then up a steep climb and out of the gorge. This was the first climb since leaving Tarifa and the ascent, which was over 400 metres, took a good 40 minutes. Just before we got to the top 4 Chamois (I think) danced across the trail. 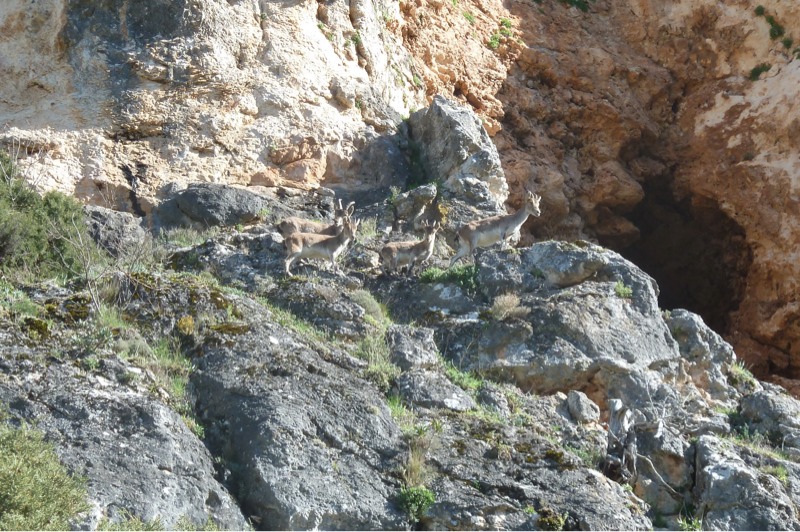 The final walk into Carchelejo was the inevitable march downhill. We got the hotel in Alcala la Real to book us a Casa Rurales, the Mezquita de Megina, and decided to stay there two nights. The Mezquita landlord told us that the two hotels in Cambil are shut and offered to ferry us back from there after tomorrow's walk and back there the following day.

Had a nice dinner in the bar near the church and watched the Real Madrid game. Trying to understand the Spanish news about what is happening in Japan, given a number for the people missing by a Spaniard and can only hope that this is a mistranslation.