Another absolutely scorching day. I think it's hot even by Hungarian standards, there is some talk that it might get cooler but not until next week! It's right up there in the high 90s - never walked such long days in such heat.

Despite the sun today's walk went OK. The hotel I was staying in was about 2 kilometres of the trail so I think the whole walk was about 37 kilometres. Started walking about 7.45 and finished at about 4.30 which seems about right for the distance and better than yesterday. Heat rash has gone so nothing trip threatening at the moment.

Getting some great comments from Hungarian readers of the blog. One of them had worked out where I was last night and was able to tell me follow the blue box signs back to the trail. Hadn't noticed these before but they worked a treat. Also pointed me to the Hungarian Tourist Website where, if I had known, I could have downloaded a map base with the route for free. Trouble was, when I was doing my research last year, I got such excellent information on the route, compared to what you get in other countries, that didn't think to look a bit harder. You Hungarians don't know how lucky you are getting access to such maps - in the UK the equivalent costs a small fortune.

Once I was back on the trail the first milestone were the Lake of Szejk, 5 kilometres from Hosszuperreszteg. Not sure how the lakes have come about but there a long narrow feature right in the middle of the forest. There a big campsite at one end with a Gasthof so I guess I could have stayed there.

There was a sign at the campsite, near the footpath, which said Sumeg 30 kilometres, and from that point I was in the forest for about 4 and a half hours. I have already mentioned how weird it is just following a trail, no map, like being in a maze with signs but with no real idea when the maze is going to end. For all those hours the only non forest features was an occasional bit of road walking and the crossing, via a road bridge, of a railway line. Given the sun, walking in the shade was actually good news and at least the trees are oak, ash and beech rather than endless pine or "German trees" as the French call them. 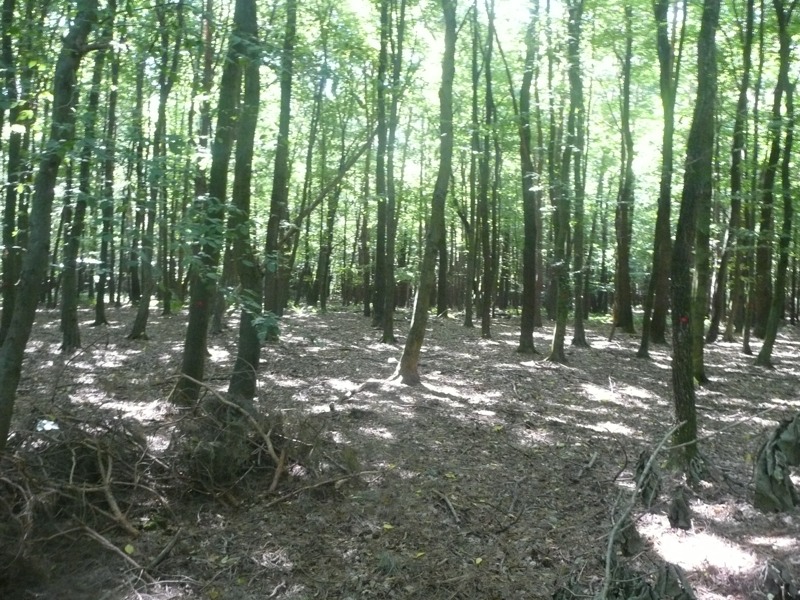 One tree had on it a stamping point for those walkers wanting to authenticate their Blue Walk trip.

At about 2.30 the forest spat me out onto a road and in the distance I got my first encouraging sight of the castle which sits above Sumeg. I was now in the sun and within minutes was missing the trees. The route seemed to meander its way towards Sumeg but on the final approach it went with the road straight into town. Hungarian drivers don't take prisoners, they drive fast, and that bit of walk was not pleasant.

The only accommodation I had been able to find on the Internet was a big and fairly expensive spa hotel. Decided to take pot luck and see what else I could find and this time it worked. A nice family hotel right in the middle of town. They speak English and have agreed to make me a packed breakfast - going to make a six o'clock start in the morning to try and beat as much of the heat as possible.

The only downside of the hotel is that it doesn't seem to have wifi so I can't publish my blog. One the Hungarian commentators suggested that I list the places I intend to stay at and tap into some local knowledge. Starting on Friday my schedule is as follows:

Would be really grateful for help on all of the above, although you don't need to worry about Budapest and London!

I particularly struggled with Koldusszalles and expect to have to stay in Tatabanya, and Mogyorosbanya. Must admit not knowing Hungary I was a bit surprised that accommodation seemed to get harder as you get nearer Budapest.

Would be incredibly grateful for any help. If you have a suggestion, than please either leave a comment or send me an email - the email address is amithefirst@gmail.com. For comments I'm dependent on wifi access, which I suspect will get more difficult next week, so email might be better. Alternatively you can send me a text on 0771 757 2645, that's a UK number.