Definite improvement on the weather today, so much so that by early afternoon I was wearing shorts. I didn't see anyone else wearing shorts, and even I had gloves on, but the weather was less bad as the day went on.


The walk was wonderful. Another long ridge path but with five distinct climbs along the way, around 1,500 metres of ascent in total. Sometimes the walk took us to the left of the ridge, sometimes to the right, sometimes over the summit and sometimes around, but always up and down. Some of the ups and downs were tough, very steep, slippery and impossible to negotiate without the fixed ropes. Another day where a steady nerve and a head for heights was essential.

The weather started misty then went dramatically cloudy - the cloudy on one side of the ridge and clear on the other thing - and then rained for an hour before eventually deciding to be fine. 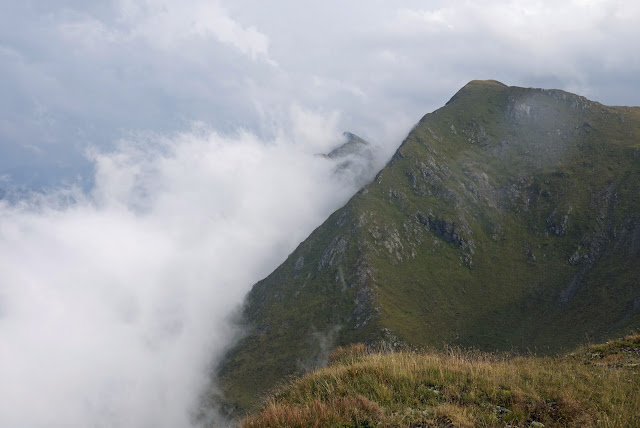 It was never clear enough to give us perfect long views, a shame because even a hint of that special broken teeth profile of the Dolomites to the south looked amazing. 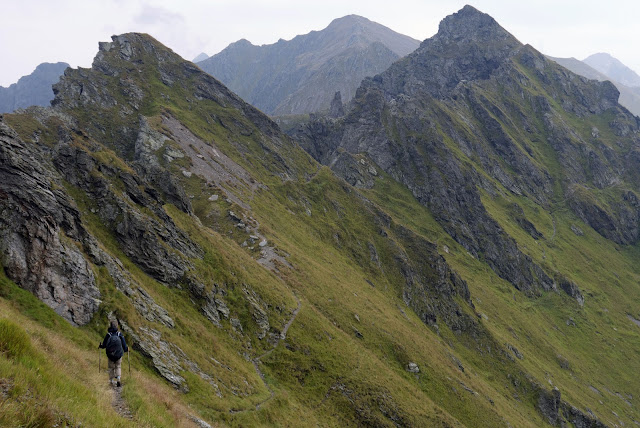 We hadn't been able to get through to the hutte and confirm our reservation so were a bit nervous about our accommodation. We knew there were about 20 other walkers on our trail from the Neue Porze Hutte and wanted to get to the next hutte before the crowd. As a consequence we spent the first two hours overtaking everyone we met until there was no-one left to chase.

The walk was supposed to take 8 hours 30 minutes and we comfortably beat that by an hour.

Still walking along the first world war front line, with trench works and the remains of buildings a feature. They are less prominent than on the first two days of the Carnic Way, no idea why, maybe the fighting on this part of the front wasn't as intense.

Arrived at the Hochweissteinhaus at 3pm (after a lovely but quite long contour walk around the valley), a really nice hutte. They asked us how many people were following us from the Neue Porze Hutte, we said lots, a least 20. They were not impressed, last week they had had 70. Thank goodness we had been warned about the crowds in August and came in September.

We have shared the last two huttes with a group of six German women, overtook them at about 11 this morning. Just heard that one of them slipped, fell for fifteen metres and had to helicoptered off the mountain. Definite sense of drama for the whole hutte.

- Posted using BlogPress from my iPhone
Posted by John Hayes at 5:25 PM

Email ThisBlogThis!Share to TwitterShare to FacebookShare to Pinterest
Labels: Red Alpina; Via Alpina