Heading the wrong way into the early morning Mysore traffic was an exhilarating, but a slightly scary introduction to the joys of cycling in India - still I survived and actually enjoyed it.  Vish, the tour leader, says 'give way to everything', but can't mean it because if you did, on these mad crowded roads, you wouldn't get anywhere. The alternative rule seems to be 'whatever you do, keep moving'. 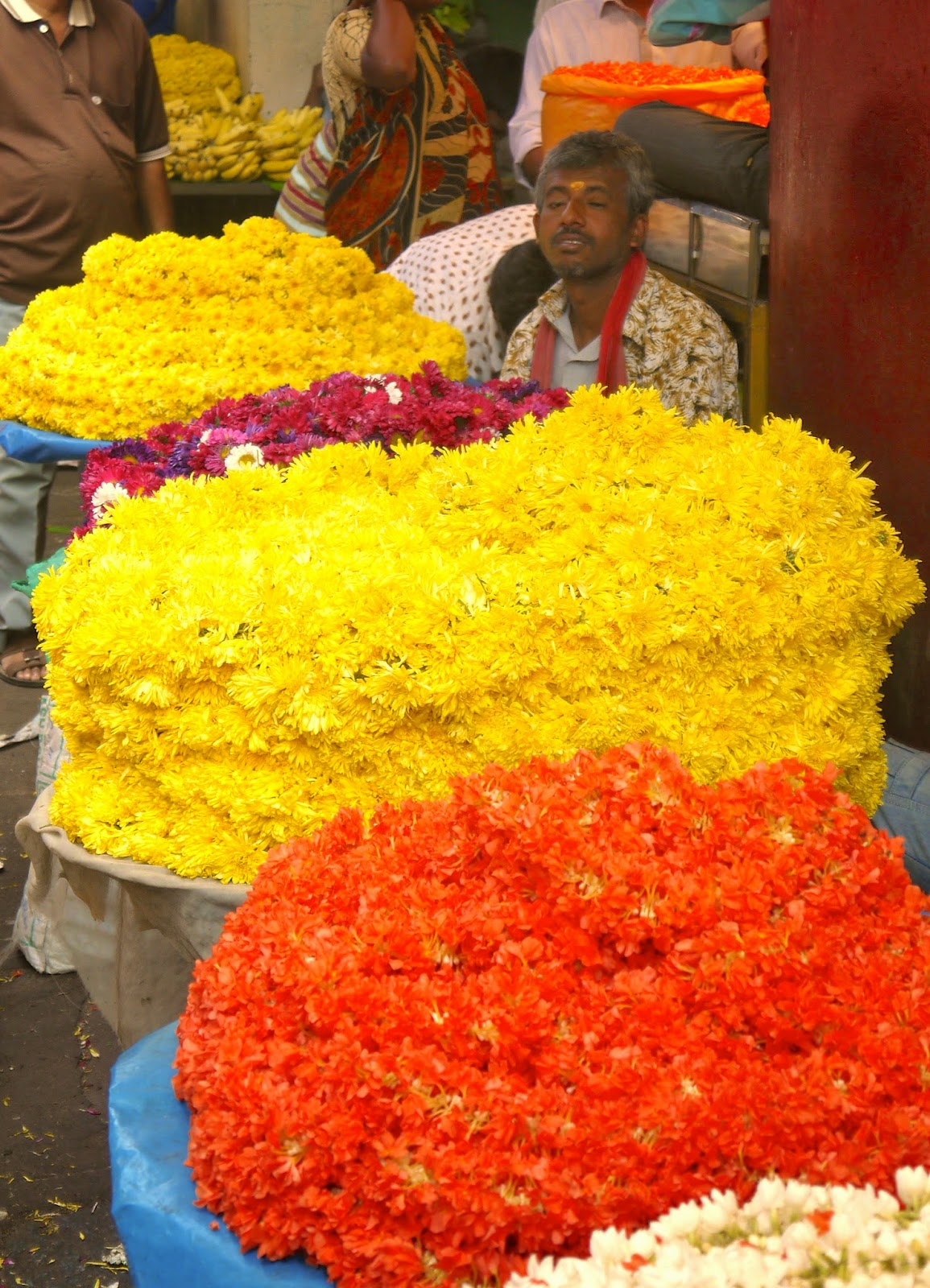 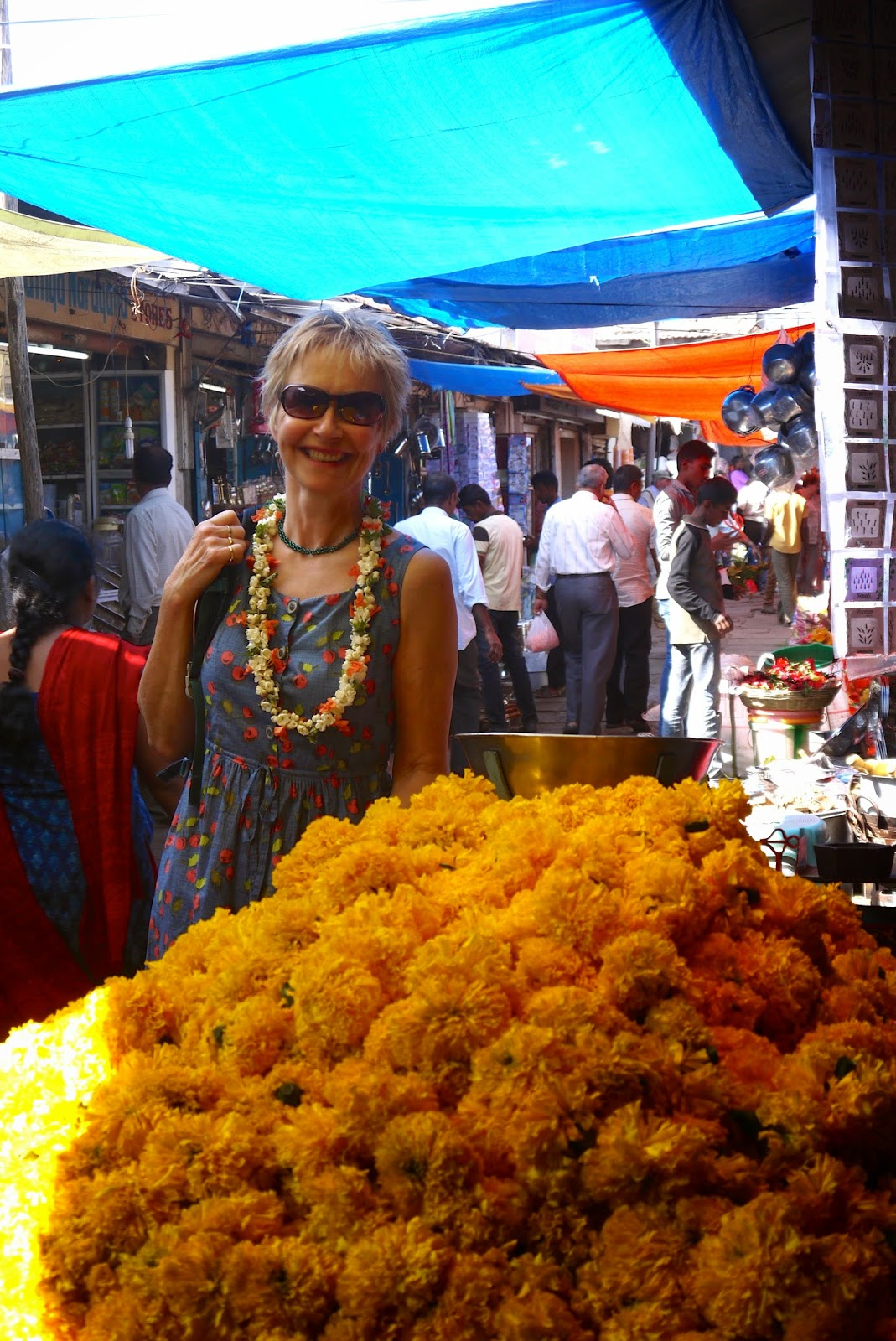 This is actually our second day in India.  We arrived very early yesterday morning after an overnight flight from London via Dubai.  Yesterday was spent recuperating and pottering around Mysore.  We went to the market yesterday afternoon, full of huge lovely heaps of flowers, but unfortunately Christine gave all the wrong a 'spendaholic' signals, and we were chased around by a huge crowd of street traders who seemed to think that Imelda Marcos had arrived.  She made an early purchase of a wooden elephant for 600 rupees and all the other elephant sellers couldn't understand why she didn't want another one (one offered an identical elephant for 100 rupees).
After visiting the palace in Mysore last night we had an amazing dinner - first full Indian dinner - and I have already come to the conclusion that the chances of exercising away a post Christmas stomach are very remote.


It's risky making a generalisation after 24 hours but India feels packed. Whether you're in the city or out in the countryside, there are be people everywhere.

The countryside was particularly interesting and seeing an Indian agricultural landscape up close was something new to me.  It looked very productive. Lots of deep red/black soil, plenty of water, sun and heat. You could almost see stuff growing in the fields, lots of different sorts of stuff, the most important of which is sugar cane.

Although in modern India the exodus from the countryside must be happening at speed, based on a single rural excursion, it's still got a long way to go. The sugar cane was chopped by hand, bundled onto carts and dragged away by a pair of skinny white buffalo.  Everything looked primitive, people intensive, and although not mediaeval, certainly from another age; it was like cycling through a living museum.

Today's trip involved 30km ride to the ruins at Srirangapatnam. The town is enclosed by the River Kaveri and has long been an important defensive location.  The then ruler of large swathes of southern India, Tipu Sultan, who was egged on by the French, had a series of victories over the British before being finally defeated and killed in 1799 (before a proposed linkup with Napoleon could materialize).
The town hosts large Hindu and Muslim temples with the Hindu temple (Ranganathswamy) particularly old  and important(circa 1200). We visited both of them, although to be honest, the most interesting thing for me was watching a river bank scene.  It was packed. There were groups of men and women bathing, some groups doing it for pleasure, others as part of some religious ritual.  There were women washing huge heaps of clothes alongside domestic animals, cows and even a few pigs, in the water which looked a long way from clean.

I'm also starting to get to know the group.  There are 13 of us, 10 Brits, 2 Canadians and one Australian. It's a very friendly group, mainly the recently retired, and just about everyone has done several similar cycling trips before. I must admit based on today's experience I can see the attraction.
Posted by John Hayes at 1:52 PM