If I had to sum up today's performance in a phrase than 'poor judgement' is the one I would have to use.

The trouble is, for no reason whatsoever I wanted to get myself in a position to get to Dieppe by Thursday.  I don't really need to be there for Friday, but the games I play with myself meant I wanted to better that 'target' by a day.  Somewhere in the back of my head that meant getting to, even through Paris today. I hadn't worked out where I was going to stay and given my tight fisted nature Paris was always going to be a problem.

Things started badly.  A few miles north of Nemurs I get a puncture in my front tyre. Now I haven't mentioned punctures, I felt it was tempting fate because I haven't had any, and given the ground I've been covering I think that's pretty good.  Indeed, I haven't since I bought this bike six months ago and its done loads of off road cycling.

Anyway, I find what caused it, take the thorn out and put in a new tube (have three spares).  All goes well until five miles later, my back tire slowly deflates.  In fact, it was so slow that I kid myself into believing it's not a puncture and pump the tyre up again, as if that ever works.  Sure enough, it goes down again, I find the hole, but this time I couldn't find what caused it.

Three miles down the road the tyre goes down again and again I find the hole, but not the cause.  As well as wasting time, burning my tube reserves (I use a patch this time) it's getting worrying.

When the whole cycle happens again, the third back wheel puncture and I lose confidence altogether in the tyre and ask a passerby if there is a "Velo magazine" and he tells me there is one in Fontainebleau, about 6 kms to the east of the last puncture and my route. The tyre gets me there before going flat again.  I get a new one and tube and I'm on my way.

It's a hot sweaty afternoon and it's about 5.30 before I start to close in on Paris.  I miss the turn onto the cycle route along the Seine and spend time in traffic and pot holes before I get this right.  Spend some time cycling through what in any other city would be called a squatter camp, but I don't think such things exist in Paris - or people going through wheelie bins, something I saw later.

At about 6 I saw the Notre Dame and the excitement of seeing it persuaded me to head on into town rather than cross the river and book into the Budget Ibis which, given the fact that I'd been on my bike for nine hours made sense.

It took a bit longer to cross the city centre than expected, but it's such a gorgeous place that I wasn't that bothered.  I had planned to get a picture of myself with bike near the Eiffel Tower, but when I discovered it was not on the side of the river I remembered from my last visit didn't bother.
I found a hotel quite quickly, but I didn't like the manager and decide I could do better than the 80 euros offered.  It took me 15 mins to find the next place and although the manager was a nice he wanted 110 euros.

I couldn't go back to the first guy so decided to follow the route out of town.  I cross the Bois de Boulogne and head down to cycle route near the Longchamp race course.  Following my GPS track down to the river I then discover that this is where all Parisian cycle fanatics gather, that I'm heading down the track the wrong way and that they are all hurtling down on in a massive peleton.  This is the only near death experience I've had on this trip and I was lucky to get away with just a lot of abuse.

I go with the flow and eventually escape and held towards St Cloud. I decide to look for a hotel there.  Dashing into a supermarket (on top of a hill) for information and water (my dehydrated brain has shrunk to the size of a prune) I'm told my best bet is back across the river in Boulogne Billancourt where there are lots.

They were surprising well hidden.  The first one was 200 euros, the second a doss house that even I couldn't stomach, the third was closed for the summer and the fourth one full. I found the one I'm in (very French in the worse sense) is 75 euros, and I arrived at 8.30 which, according to my GPS is nearly 12 hours after I set off this morning. I guess  the lesson is an Ibis in the hand is worth all the hotels in Paris in the bush. 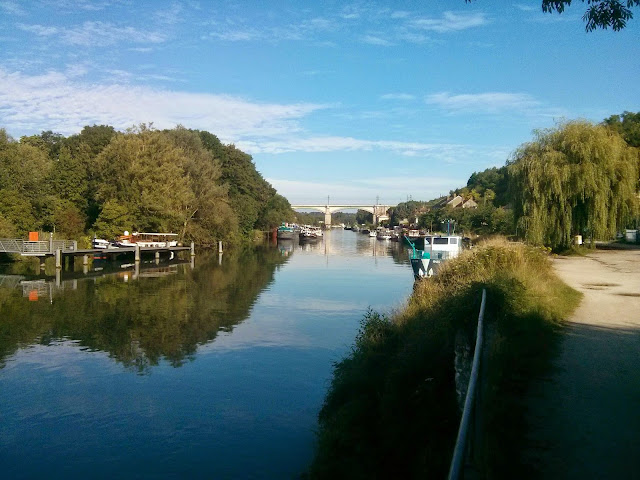 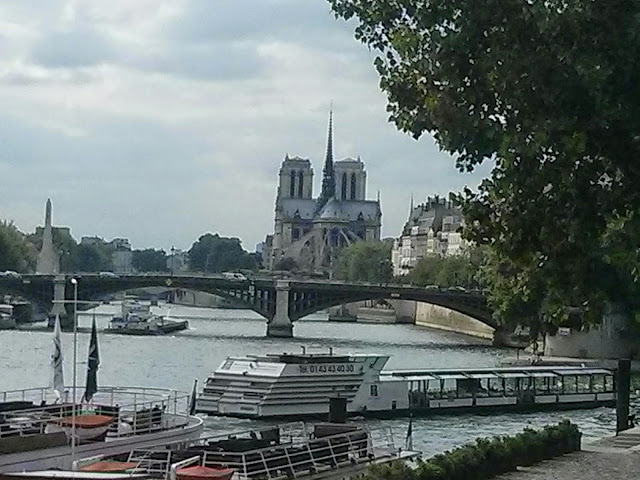