Today has been a huge, wonderful day.  The weather changed just in time for us to enjoy what is the best scenery on the whole trip.  What's more, driven on by Christine's desire to avoid sleeping in a dormitory we have walked half way across the Dolomites to a small hotel on the northern side of the famous skiing circuit, the Sella Ronda.

Although we had been promised better weather it was the same old mist that greeted us this morning. Then, just as we thinking about waterproofs everything changed, the mist cleared and the huge Peitlerkofel, towering above the hotel was illuminated by the early morning sun.  We could hardly believe our luck.

For the first hour we climbed in a shady valley around the Peitlerkofel before crossing a pass, the Peitlerscharte, into an absolutely idyllic upland pasture, a perfect 'sound of music' landscape.  Instead of Julie Andrews running across the meadow a herd of brown and white cows, complete with jangling bells, provided the accompaniment but the views were just as good. 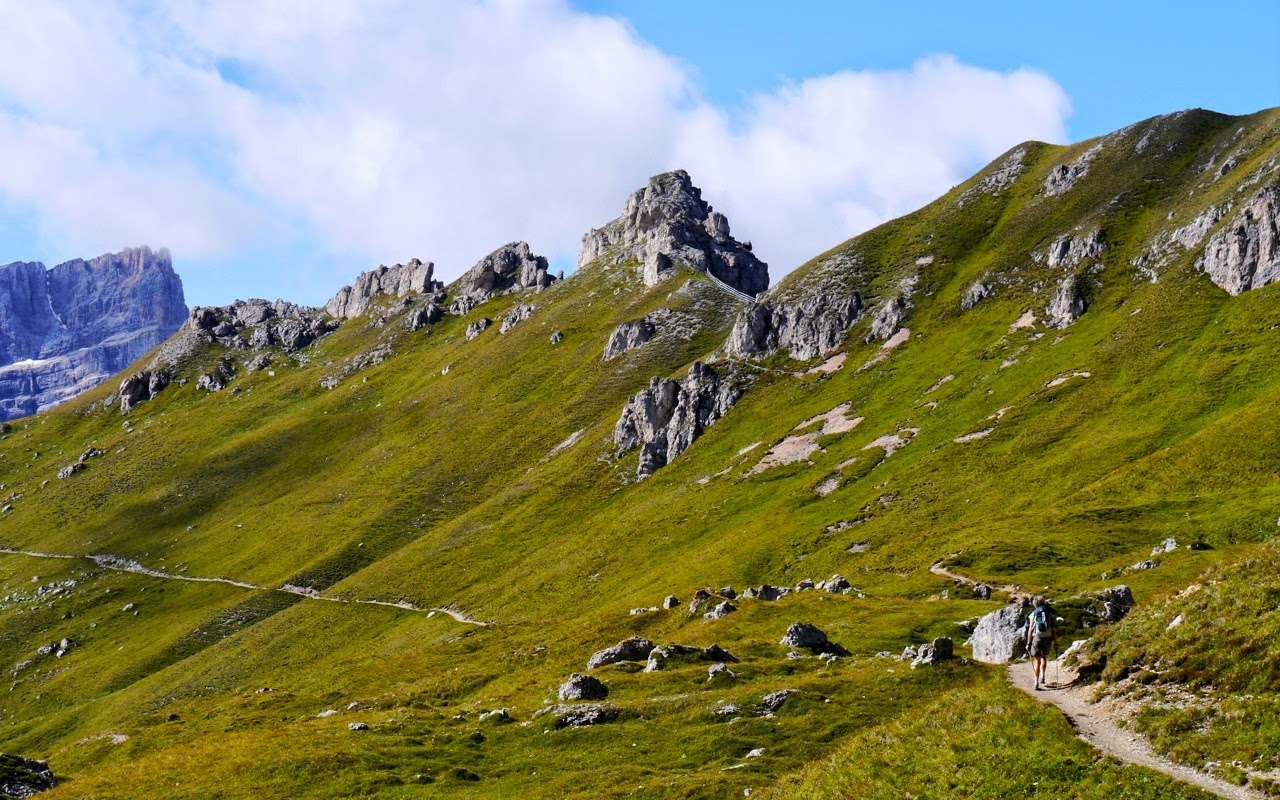 The path stretched into the distance ahead of us, a thin white line around a mountainside of green.  Although clouds were racing across the sky the air, and the views, were exceptionally clear, it was perfect.
We stopped for an early morning coffee and carrot cake at the Schlüterhütte.  If it hadn't been full we would have stayed there last night. It is beautifully positioned in the middle of some of the best hiking in the world and busy throughout August.  We decided it was definitely worth another visit at a quieter time.
After climbing another pass we could see the next two hours walking laid out ahead of us.  Even from a distance of perhaps three miles the last bit, the climb over the Roa Scharte looked terrifying.  The pass, approached by a path zigzagging its way up scree, was made worse by the fact that you could see it and contemplate it from such a distance.
Up close it wasn't so bad and the fact that a German family were taking young children over it helped toughen our resolve but we were both glad to get to the top and relax.

For the next section there were two options, both tough but one involving what looked like a 200 metre vertical climb up a rock chimney.  Getting to it involved a traverse across a steep scree following a very narrow path.  Christine decided enough was enough and decided to go the easier way.

By then Remy had caught up with us and we agreed that I would do the climb with him and that Christine would take the longer way round.  Christine set off and I waited for Remy to get his gear together.  I was then stunned to see the German family set off across the scree to make the climb.  There was a grandfather, his son and daughter in-law,  6 and 7 year old girls and 9 year old boy.  The 6 year old was complaining about being made to wear a harness connecting her to her dad.  It was amazing to see and it quelled my nerves wonderfully.

Of course once in the chimney it wasn't nearly bad as it looked from a distance and everyone got to the top and to more amazing views without incident.
After another high level walk along the side of the valley I arrived with Remy at the Puezhütte where we were scheduled to stay at about 3-30.  Christine was yet to arrive and I inspected the dormitory which was right in the roof space.  It was so tight that you had to leave your rucksack outside and already, this early in the afternoon it was filling up.

Christine arrived just before 4 and after a beer, and the arrival of a huge party of Italians, we decided that there had to be a better option.  The Passo Gardena was 2-40 mins away, there were hotels there, and anything was better than a hot evening under the rafters.

After saying goodbye to Remy we set of across the barren limestone landscape illuminated to perfection by a waning sun.  It was a great walk, a huge semi-circle around the head of the valley, a climb over a pass,  a valley side path, another pass and then the final crashing descent down to the Passo Gardena.  What was supposed to take 2-40 took us 2 hours - the perfect end to a perfect day.
Posted by John Hayes at 8:11 PM