'The Dream Path' - Munich to Venice

The idea of walking the 'Dream Path' grabbed me a couple of years ago when I was walking the red variant of the Via Alpina in Austria. Bad weather meant we were stuck on the Austria - Italian border at Pfitscherjoch in the company of several groups on their way from Munich to Venice (the border is about half-way).   Although it's relatively unknown in the UK, this walk is seen as the prize challenge for German Alpine hikers. 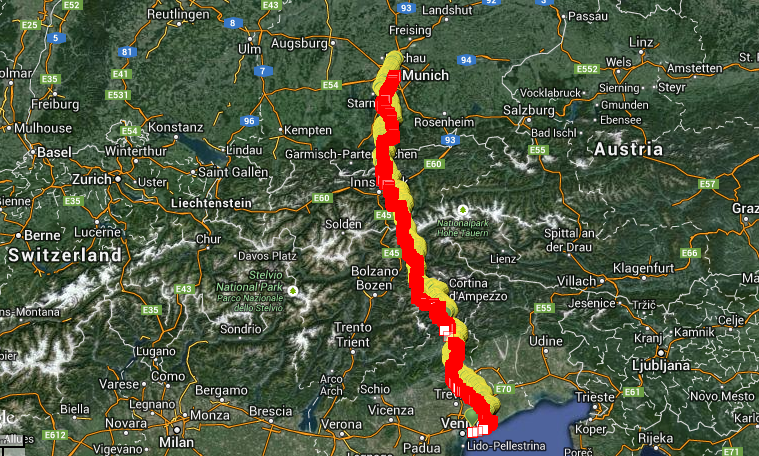 The attraction is immediately obvious. The route crosses the Alps from north to south and links two of Europe's most iconic destinations, starting in Munich's Mariënplatz and finishing in the Piazza San Marco in Venice.  Carefully planned in 1974 by Ludwig Grassler, an Alpinist from Wolfratshausen (the target for day 1) the walk is challenging but reasonably accessible. It takes you through some of the best scenery in the Alps: the Karwendel, Tuz and Zillertal Alps and across the main Alpine ridge. Travelling along the Alta Via 1 and 2 it also manages to grab the main highlights of the Dolomites.  While doing this it makes use of what is, without doubt, the best high altitude hiking infrastructure in the world.

So starting on the 13 August 2014 our schedule involves 28 days of walking.  There are 2 and half flat days at the beginning and another 3 at the end with some 22000m of climb in the middle (over 16 Ben Nevis's).  We have built in some contingency days and, if we don't need them, we'll get to stop for some lake side recuperation in Alleghe.  If all goes to plan, we will be back in Brighton on 11 September.

There is plenty of published information about the route including at least 4 guidebooks. Unfortunately if, like me, you're a linguistically challenged Englishman they don't help much as they're all in German. My first guidebook - GR1 Sendero Histórico - is now in the Cicerone production process and, despite that, I have managed to persuade them that I'm capable of doing another one.   So, as well as a 28 day trek I am taking on the very modest task of introducing the Munich -Venice route to the English speaking world.
If you follow my blog you will have realised that although they can be long my trips are not exactly hardcore.  If I do any wild camping it results from a serious plan malfunction.   This route involves a lot of nights in mountain huts which, although great fun, can leave you a bit short of sleep.  (The worst night's sleep I've ever had was on the final approach to Zermat on the famous Haute Route where, in a fairly new hut, the sleeping arrangement involved three tier bunk beds with three people to each bunk.  Hot, smelly and definitely an infringement of one's human rights.)  The huts can also be challenging in terms of wifi, but I will be blogging and tweeting as much as possible so follow me if you can.