Dear Christine, I'm now in Sillian in a very comfortable hotel preparing to take on the Karnischer Höhenweg. Since leaving Stein four days ago I've traveled to Passo Duran, crossed the Schiara-Gruppe, walked down to Belluno and journeyed by bus and train across to Sillian. I quite like mixing up a bit of travel with the walking, I love it when all the different bits come together.
You'll remember the Sebastian at Passo Duran. It's privately run and halfway between a hut and a hotel. found myself in the hut half and shared a room with five still managed to get a good night's sleep. Spent dinner chatting to a very experienced German walker who gave me some useful information about how the hut system works.

The weather next day was perfect. The walk was a straightforward repeat of last year's hike.  I'm sure you remember walking through the pine forest, crossing the scree on the way up the first pass and the views from the ridge on the way to the little hut, the Refugio Sommariva al Pramperet, where we stopped for an early lunch. The afternoon in the heat was a bit tougher but not as tough as I remember it from last year. Unlike last year, none of the winter's snow had survived the summer heat. The view from the top, particularly Mt Pelmo, was very clear but I still can't be sure if the mountain to the NE is Marmolada.
The descent to the hut if anything seemed even longer and this year signs had been put up telling you to be careful as the path you're descending is steep. Stating the the signs might have provided some satisfaction to my cousin nearly came a cropper on that stretch last year.
The hut was exactly the same, totally packed, little in the way of facilities and cold showers. The food however was good and I had a good night's sleep.
As you know the main purpose of this part of the visit was to assess whether the route Marcus completed last year was viable and could be included in the guide. Without it you either have to catch a bus or do a sustained bit of via ferrata through the middle of the -Gruppe. Since Marcus did it last year the woman in charge of the hut has also completed it and although she thought it tough, and likely to take up to 9 hours, confirmed that it was possible. She insisted that I tell the Refugio 7 Alpini that I was coming this in case I didn't turn up!
I set off about 7 and descended through a beech forest for 1200m. The route then turned south and there was a sign for the Refugio 7 Alpini. The were good, although the path was poorly defined and took a different course to the one I had derived from the map. There was nothing desperately challenging to the climb up the compared to the rest of the Munich Venice route it felt very remote.
There was a stretch of exposed walking beyond the pass which would have been dangerous in bad weather and this was followed by a steep descent into a tight valley and a climb up to a second pass. The second pass was approached through a gully which contained a herd of ibex which showed their annoyance at being disturbed by dislodging some rocks. 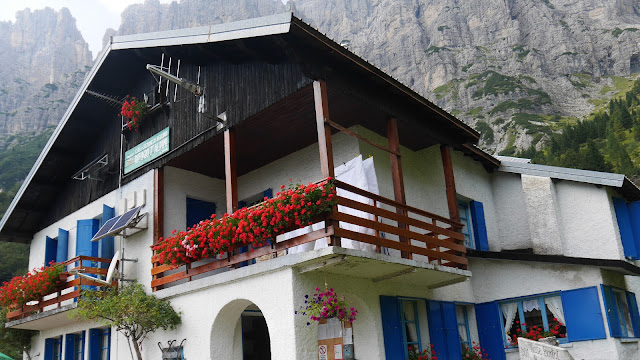 Once over the second pass the route descended into yet another valley, joined the via ferrata route which had taken a more direct route over the -Gruppe, crossed a third pass and the descended down a horrible gully to the Refugio.  I got there just before three, told them I had arrived (they were impressed with the time), had a of apple juice and soda and to avoid another night of snoring headed down to Belluno. I arrived at 6-30 and, after a shower, went and had a really nice meal ( too much wine) in the restaurant we went to the first time we came to Belluno, the one through the arches.  Not a bad day!
Posted by John Hayes at 4:19 PM