Some days things don't go to plan, and this was one of them.

this morning was misty and cold. Without much enthusiasm we left our noisy hotel in the middle of the rush hour and were soon back on the canal side track. To be getting a bit fed up of the scenery which, ever since Toulouse, has been pretty monotonous.
After 90 minutes or so at Buzet Sur Baïsse we had our first coffee. Christine bought some more prunes - she now has a kilo and a half. The sun broke through and for the first time in 3 days I took off my cycling waterproof.

With the sun the scenery also improved. trees now lined the canal and the cycling was once again beautiful. An hour later, just before the planned first lunch stop, Christine gets an entirely unplanned puncture.
We have come prepared for punctures. Three spare tubes and a repair kit, but we are a bit short of technique and changing inner tube amongst biting flies (they get you if you're not moving) was not pleasant. did it, found the offending piece of glass, and set off again. All good, the weather continued to improve and the cycling was great. 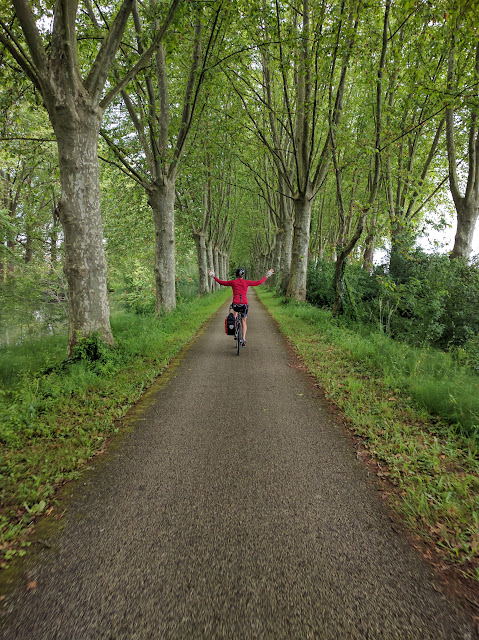 About 2 hours later we stopped near a lock for a cup of tea. We passed the time with elderly French cyclist who spoke perfect English, and shared complaints about the scenery from Toulouse. Getting up to go we see that Christine's is flat again.

We now had a team mending Christine's - the lock keeper and the elderly guy - although to be honest it felt like we were pooling ignorance. Rather than use another tube we repaired the existing one. I was worried that we still had a problem with the .

we go again and after 4 kms Christine has another flat . We examine it and yes there is another we can't find the culprit in the . Christine thinks she finds a bike shop 15km away on Google and I set off to buy a new .

After 10kms I get a call from Christine - she has made a mistake about the bike shop, I was to come back, and a nice man was helping.

George was a big guy, big shoulders, and big hands. He was making his way along the cycle path on one of weird three wheel trikes come scooter when he saw Christine and stopped. He had checked the and pronounced it good. He had found a spare tube in Christine's saddle bag and pronounced it bad. We had bought an inner tube with us from England with a hole in it.

George knew his stuff and when I dug out the last inner tube, still in its wrapper, he said with confidence that this would work. It did. He definitely had a superior technique and managed to put the bag on with just his hands, no levers needed. He confided us that he was ex -military 'like your SAS' and spent time in the mountains. Despite his annoying proficiency he was a lovely man. Christine whispered to me that we should let him have our last snickers bar and while I hesitated she offered it. He refused and sincerely stated that he didn't want anything, he helped in the name of solidarity. Saint George on a white tricycle.

We made it to our hotel by 7. It appeared very primitive, right in the middle of the Bordeaux wine growing region, but was in fact a gem. After initial saw the all you can eat buffet. Heaven!