Trekking the Dolpo - Back to Ringmo

I've learnt a number of things on this trip which, taken together, make me think that if I ever came back that I would do it differently.

Firstly being on our own with our support crew hasn't been nearly as bad as we first thought it would be. We missed the crack you get with a group, but not that much, and you do get closer to the support crew.
Secondly, if I knew I we were going to be on our own I would have booked directly with a Nepalese tour operator. I think I would choose my own route and the go direct to someone like Summit Trekking or Exodus Nepal and book it direct with them. 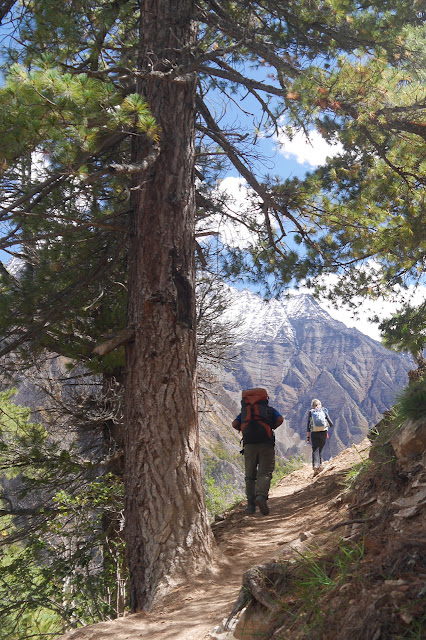 Thirdly if I was going down the bespoke route I would break the mould when it comes to some of the features of Nepalese trekking particularly the food. I would ask for something different.

It sounds a little ungrateful but the food is not good. Every day I look enviously at the food being eaten by the crew and wish I was sharing theirs. There is this weird food apartheid which involves Mani the cook providing 'western' food for the Christine and I and Nepalese food for the crew. Mani eats Nepalese food and not really understanding western food, knowing what it's supposed to taste like, is a serious disadvantage when it comes to cooking it. 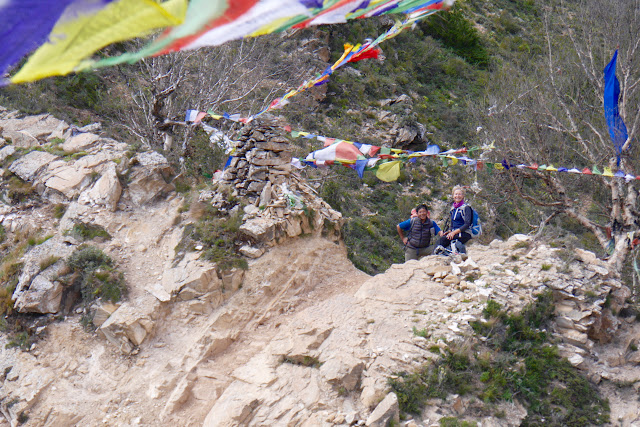 Sitting behind the apartheid approach to food is the notion that westerners couldn't possibly survive on a diet of Dhal Bhat. Well (a) it's not that bad, good actually and (b) it's a lot better that the alternative. 3/4 weeks of white rice, a sort of lentil sauce, vegetable curry (which varies according to what's locally available) and some sort of chutney or spicy flavouring hardly seems like an ordeal. I'm a tourist in Nepal, why can't I eat Nepalese food?

I've talked about it before but adventure holidays as we know them were invented in Nepal. Their origins can be traced to the early 60s when the legendary climber and ex-Ghurka Colonel Jimmy Roberts established Mountain Travel Nepal and developed a format that still applies today. This format determines the daily sequence of events (from wake up tea and washing water through to afternoon tea and biscuits) and the equipment carried on a trek. The same service is delivered irrespective of the nationality of the client and who the tour operator is and the model is applied not just in Nepal but in countries around the world. It all started with Colonel Jimmy Roberts who was, believe it or not, the first person to apply the word 'trekking' to this kind of experience.

This legacy is both wonderful and a hideous and apparently unchallengeable straight-jacket. The 'invention' has allowed millions of ordinary people to go extraordinary places but the way it's delivered seems to have become frozen and perhaps imbued with attitudes informed by a colonial past.

Weirdly the western companies, many of which started in Nepal, are not a force for change. These companies often promote 'western' tour leaders as an asset (generally someone who can't speak Nepalese and are marginally better informed about the country than you are) are not nearly as enlightened as they think are.  The same old thing is served up in the same old way.

So ends the rant. We're back in Ringmo on the side of what could be world's most beautiful lake after a walk along what is definitely a candidate for the world's most beautiful path. The weather has been wonderful and if I had to come halfway round the world to walk the same path twice then this would be the path I would walk. Still there is no getting away from it, this is the third night we've had on this campsite. A different route home would have been better.
Posted by John Hayes at 8:09 AM