Trekking in the Dolpo - back in Kathmandu

After camping in Jumla last night, the last one under canvas, we're now back in Kathmandu and getting ready for our flight home tomorrow. To be honest after the delay to the start of the trip, the horrible extended stay in Nepalgunj, it's a relief to be here. The weather last night wasn't good and we really thought that flights this morning were going to be delayed. It was all very stressful but in the end the flights went without a hitch and after leaving Jumla at 8 we were back in Kathmandu in time for lunch. 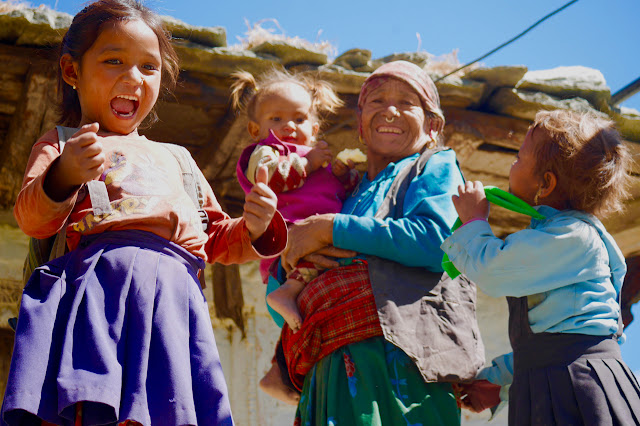 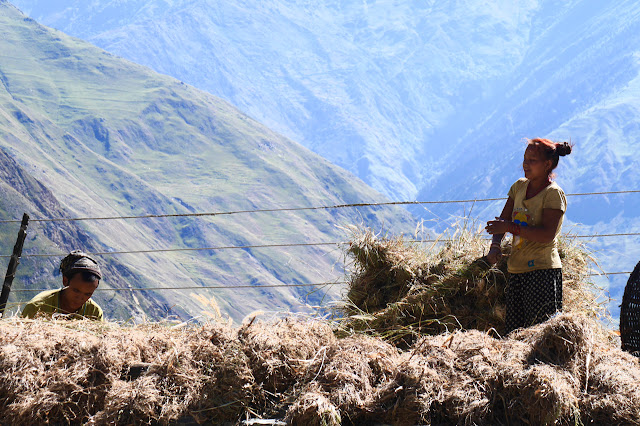 The final up the hill, through the village of Paranga to the tea house next to the airport was great. The village, in particular, was fabulous and knowing what to expect I was ready with my camera.

The village is the largest one we have seen, pitched on the hill-side and in the middle of an escalade of terraces. The villagers were busy harvesting and drying produce on the roofs of their houses. The houses were all interconnected with the flat roof of one house forming the drying floor of the house above it. Narrow planks going from house to house formed alternative footways to streets and most of the population seemed to the living at roof level. Everything was happening on the roofs, crops were being dried and packed away and rice winnowed. 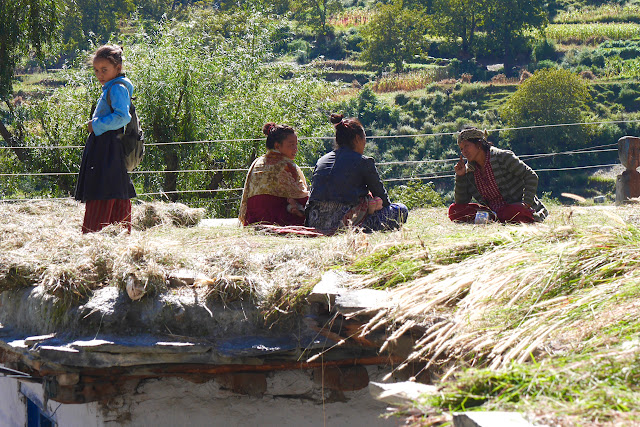 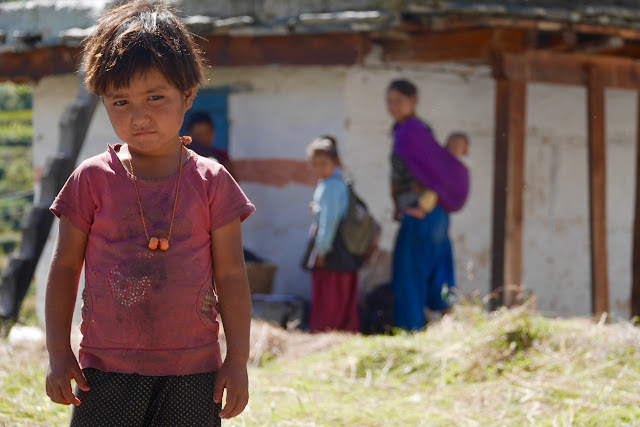 Not everyone was hyper active however. The roofs were also a place where people seemed to sitting, chatting and watching the world go by. Particularly obvious were the grand parents looking after the grandchildren, children under the four as the other children had been packed off in their blue school uniforms to the school on the edge of the village. 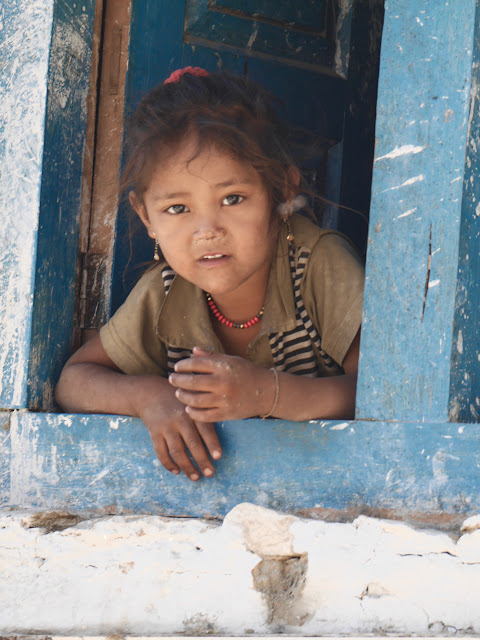 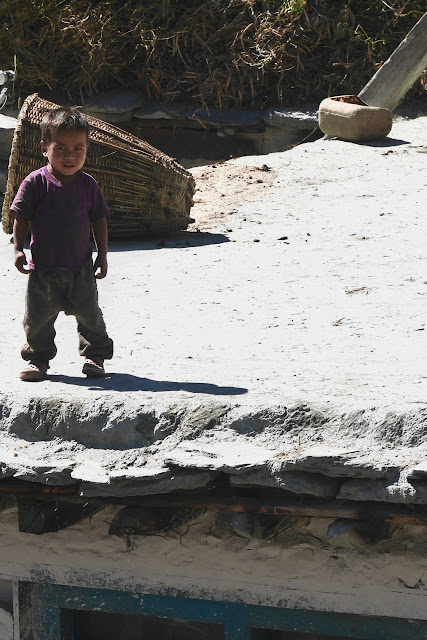 The roofs of course were totally open, no rails to save the accident prone from a careless step. It looked terrifying. I saw a 2 year walk unsupervised walk across a plank connecting two houses at least 15 feet above the ground and later watched, fingers crossed, as some 7 years played a primitive form of badminton on a rooftop space. BB assured me that in Nepal, children learn quickly; they clearly have to.

Each trek has some wrap-up events and even this one, with just the two of us, was no exception. 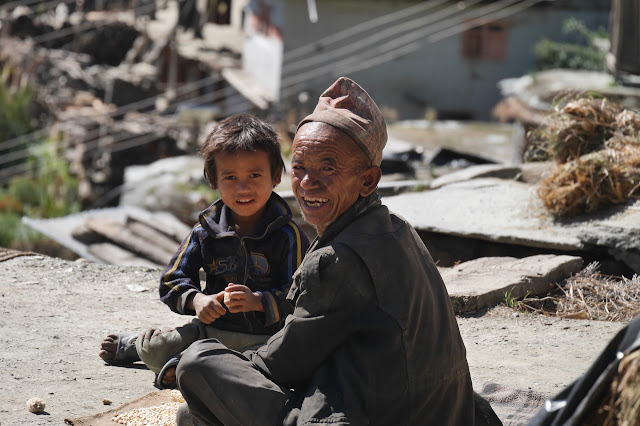 Tips are an important ritual and each trekker is expected to make a contribution with $100 equivalent the going rate. We upped this a bit and I had warned BB a couple of days ago that I wanted him to decide the allocation. The usual practice is to share it on hierarchical basis with the leader and cook getting most. BB however, came back with a surprising formula, essentially a flat rate adjusted to reflect the time it was going to take for everyone to get home.

The tips are distributed after the last meal which is normally eaten together although lack of space in the tea house prevented this from happening so we had our meal in the mess tent as usual. The meal was enormous with fourteen elements. It included a delicious goat curry, rice, chips, Tibetan bread, onion bhajis, cauliflower curry, lentil curry and so. Afterwards we had cake, multi-coloured and produced somehow without an oven.

The distribution of tips is accompanied by little speeches and handshakes with each member of the crew. This feels slightly embarrassing to both sides but always happens and BB had assured me that the crew would be disappointed if it didn't happen.

To make the whole thing worthwhile, as well as the tips we bought everyone a beer. Beer in Nepal is hideously expensive relative to local wage levels and is produced for tourists. I suspect the crew would have preferred the alcohol they are used to which is Chhanng, a cloudy relative of beer produced inside bamboo poles. I've had it and the taste is yet to be acquired.

The rituals help manage the weird transition you go through at the end of a trek. You've spent days together and, particularly in the case of BB, established a relationship which is close. He's now starting to think about seeing his family again and his next trek and you're starting to think about home and the journey that stands in the way. You want to say thank you properly and the ritual is the recognised safe way of letting you do it.

With larger groups you can expect a bit of a party but with just the two of us and the six of them this would have taken things too far.

I had a dreadful nights sleep kept awake by the dogs 'talking' to each other across the valley. I heard that they bark at the moon but I don't believe it, they bark at each other. Eventually they stopped and shortly after it started to rain and I lay there speculating about the diminishing chances of flying out in the morning and whether I could cope with another night of barking dogs. 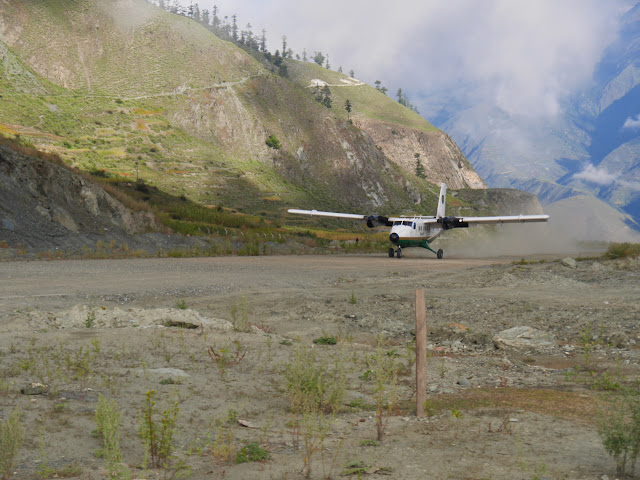 Morning came, the cloud was low but BB seemed confident that there would be planes today. Sure enough we had barely eaten our favourite breakfast, fried egg chapatti sandwich, when a scramble signal came and we rushed up to airfield. Flights still looked impossible but after a series of incremental steps we were on the edge of runway and watching a Twin Otter emerge through a gap in the clouds. We were on our way home.
Posted by John Hayes at 3:02 PM