Trekking in the Dolpo - Dunai

Today was our last proper trekking day, a day blessed with great weather and a heroic goat.

It was really hot and again the route seemed a lot longer than our memory suggested.

An hour or so from the campsite there were prayer flags on the path. BB told us they marked the spot where, a few weeks earlier, Thinlen Lhonlup, the star of Eric Valli's film 'Himalaya' had died. He had fallen with his horse into the ravine below and had died in a helicopter on way back to Kathmandu. Thinlen was a huge Nepalese figure and BB, who with Summit Trekking had worked on the film, was clearly moved to be at the spot where his hero had died. 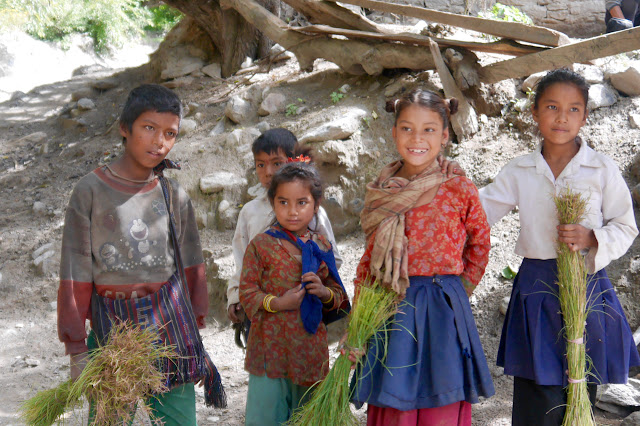 The great medical story is that Christine has discovered a cure for her hay fever. Normally she suffers from hay fever in April-May but she gets it in October in Nepal. The cannabis plants, which are everywhere, have matured since we walked up the valley and are now heavy, seedy and very aromatic. Christine has discovered that grabbing a handful, rubbing the mixture between her fingers and inhaling deeply completely clears her head. This is not the effect I remember but it seems to work for her.
Medical breakthroughs are not the big story of the day however, the big story concerns the wonder goat.

After crossing a suspension bridge we stopped to watch two men try to repeat the feat with their flock of goats. Disguising the bridge with branches suggested they were anticipating trouble and sure enough persuading the 30 or so goats onto the bridge took a number of efforts. One goat, in particular, was resistant and they made numerous energetic attempts to persuade him to join his brothers and sisters who were now waiting on the bridge. Watching their efforts was mildly amusing until the goat ran down to water and leapt in. What had been amusing now suddenly turned sinister - making it to the other side through a seething mass of water looked impossible.
Sure enough, the goat, who had made his dash for freedom 200m upstream, was soon below us, marginally closer to our side but still a long way-way from safety. BB dashed down to the waters edge and for a second I thought that he was going to attempt a rescue, a particularly worrying prospect because BB had our plane tickets. Fortunately, wisdom overcame valour and he kept his feet on dry land. The goat had got close enough to the bank to effect a partial escape only to be grabbed once more by the torrent and from the look in his eyes he seemed to be accepting his fate. Within seconds he was being washed away and was literally heading round the bend.
It was a shocking sight, a real conversation killer, and it was a surprise when a couple of minutes later we found the goat in the path giving himself a shake. The goat continued to gamely resist arrest until at last he was captured by his owners.
The emotional rollercoaster meant we were ready for lunch which we had in the teahouse we had stopped at on our first night. I'm not sure what the biggest attraction is, the wonderfully stocked vegetable garden or the beautiful Nepalese woman who ran the place. Cherry tomatoes, carefully arranged, were drying in the sun and as well as a Nepalese lunch, I came away with a bag of multi coloured beans which I promised to plant when I got home. I felt like Jack of the Beanstalk.

We camped just along the road from Dunai. Tomorrow all we have to do is walk up the hill to Juphal where theoretically we will spend our last night before flying next morning back to Kathmandu.
Posted by John Hayes at 11:03 AM