Aveira is a surprisingly nice place, surprising because the final approach, along tight busy roads in the rush hour, was horrible. It's actually about 10 kms off the route and after making it through the suburbs, its old historic centre, a small port at the end of a lagoon, was packed with Baroque buildings and nice restaurants. I writing this waiting for my eel stew, apparently the local specialty, and half a bottle of Douro to help it go down. It's a tough life!

Actually I think I deserve it. Today's 95km was flat and easy but I was in the sun for a long time. Yes the weather continues to be perfect. 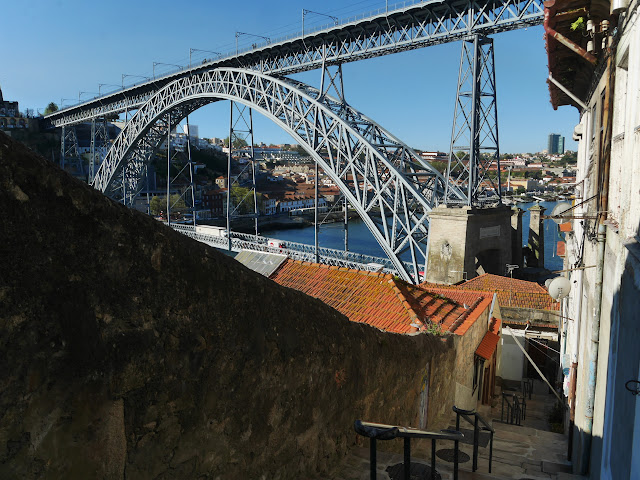 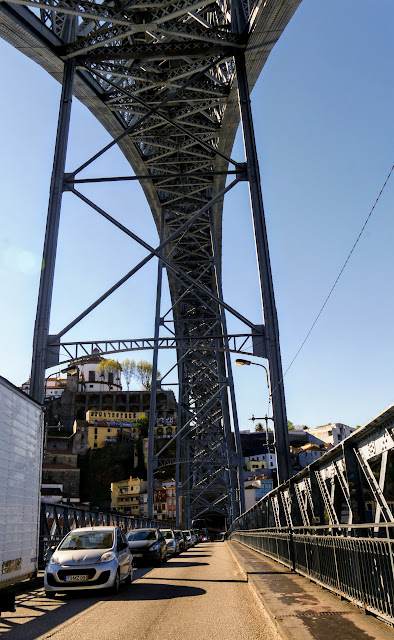 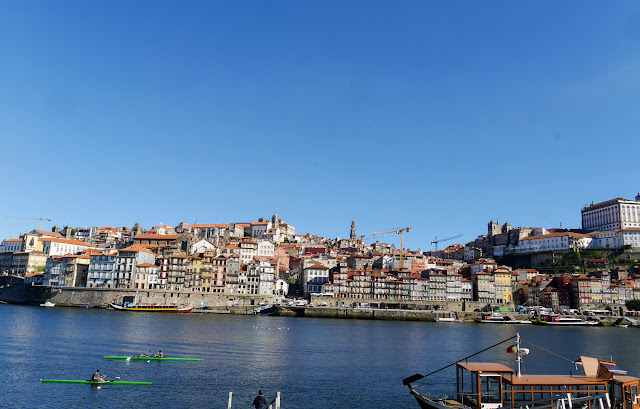 Despite a bit of dodgy navigation leaving Porto, I got away early. The dodgy navigation resulted in me carrying the bike down some never ending stairs but at least I got a great view of that bridge. I then crossed it on the bike which was even more fun. After a final view of the lovely Porto the route turned south along the coast. 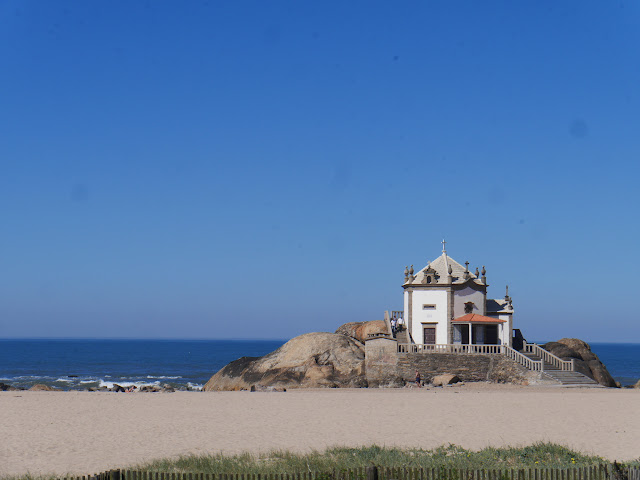 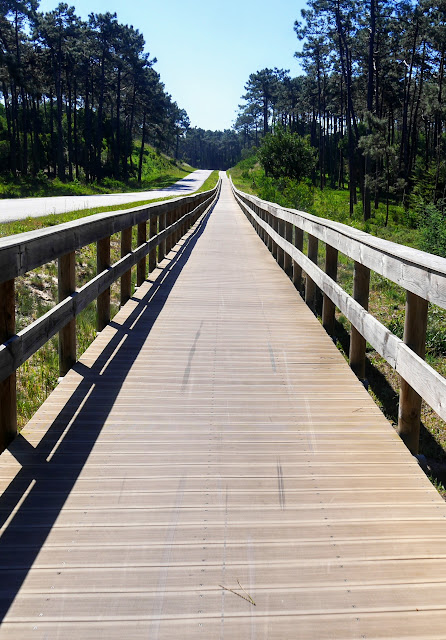 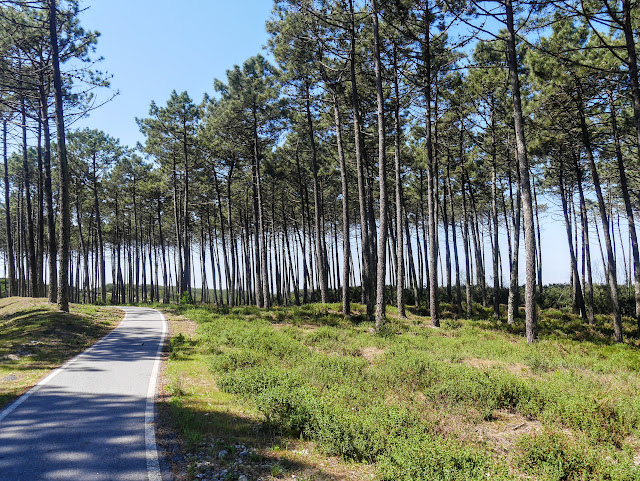 To be honest the best views of the coast were from a wooden footpath that navigated its way through the dunes. Cyclists were generally kept off this and had to make do with a cycle path that ran alongside the road and usually a little way away from the sea. The cycle path was high quality, (although I still haven't seen a Eurovelo sign), with a good surface. At this time of year there is hardly any traffic on the roads but somehow it seems crass not to use the cycle paths when so much effort, and EU money, has been used their construction. 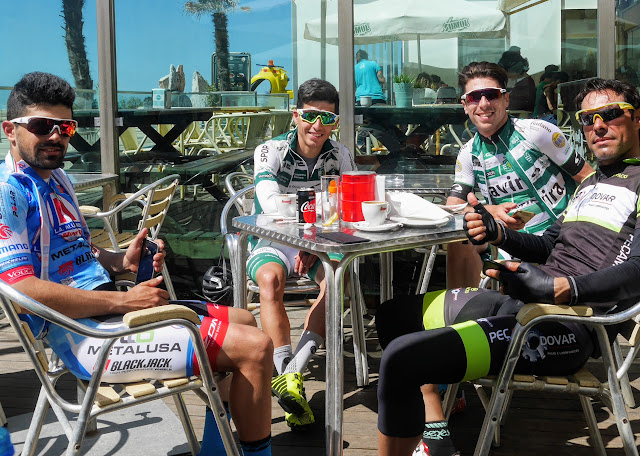 There were plenty of places to stop for coffee and lunch. I found a restaurant just away from the beach in Furodoura. It already had a group of young cyclists in lycra gear that made mine look baggy. After a local came to have his picture taken with them I worked out that I was sharing lunch with cycling royalty, all professionals and affiliated to the big Portuguese football clubs. The one with the combed back hair, third from the left, is apparently a superstar, top man in cycling here. 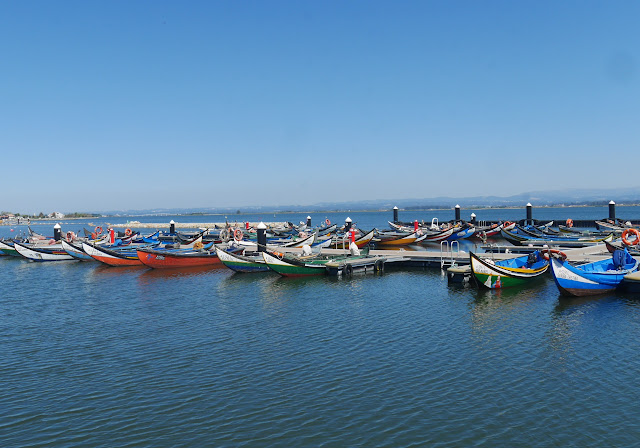 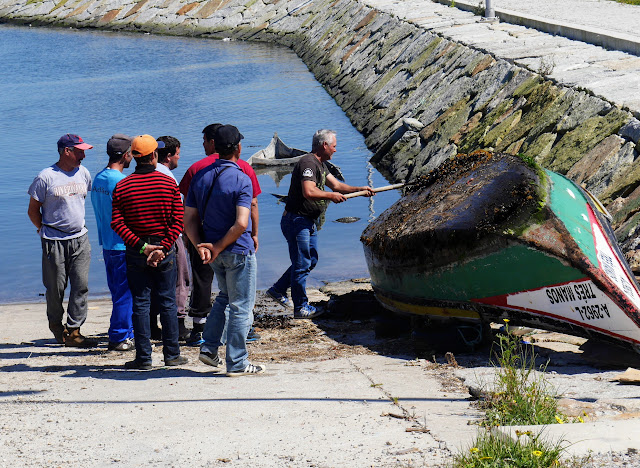 The coast then subtly changed. The prevailing current has formed a huge sand spit with a lagoon on the landward side. The lagoon is enormous, big enough for its own distinct form of fishing boat, a sort of overweight gondola. The route followed the western shore of this lagoon down to Torreira where I had to wait for an hour for a ferry to cross the lagoon. The big spectator sport seemed to be watching an expert clean the barnacles from the bottom of one of these overweight multi-coloured gondolas but I couldn't see the attraction so cycled across the spit and lay on the beach. 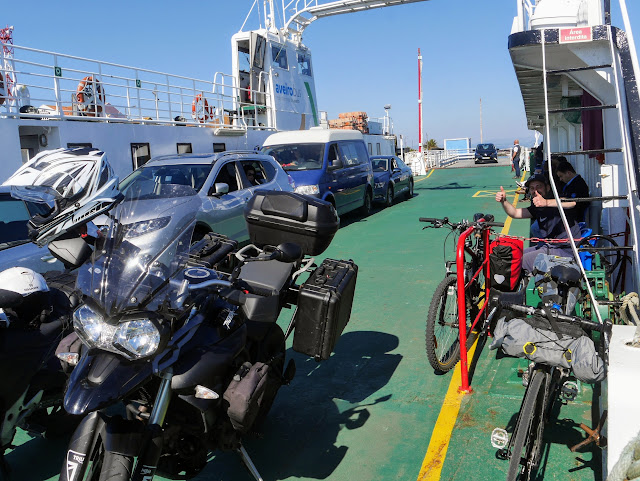 On the ferry I met my first Eurovelo cyclist, a young German heading down to Faro. He was camping and compared to me was traveling heavy. He told me that Porto was hugely influential in J.K.Rowling's development of Harry Potter and that he had done the J.K.Rowling tour. How come it took a German to tell me that. 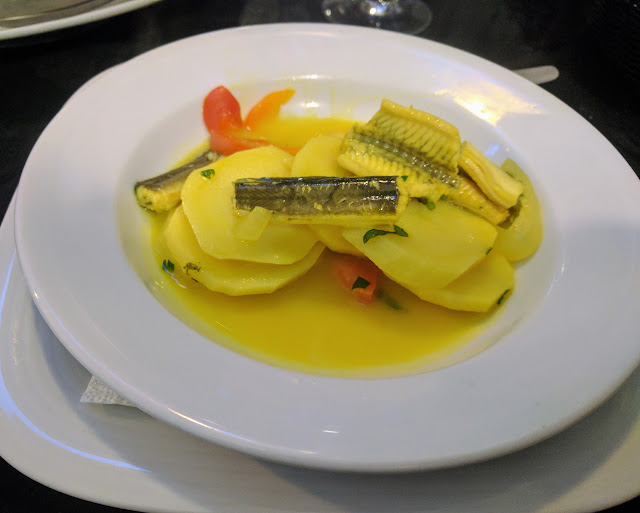 The eel stew was excellent by the way. Potatoes, eel, onions and peppers in a saffron sauce and the eel itself was light and delicate. It was a good way to finish another great day.
Posted by John Hayes at 10:01 PM