San Pedro de Moel is a nice place, picturesque and very popular. On a sunny Sunday at the beginning of the Easter school holidays it's a busy place jammed with cars. It sits at the northern end of the Silver Coast and what I hope will be an improvement to the scenery. So far it's all been just a bit too flat. 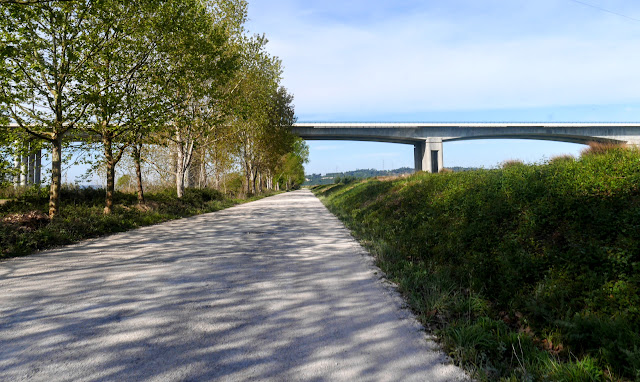 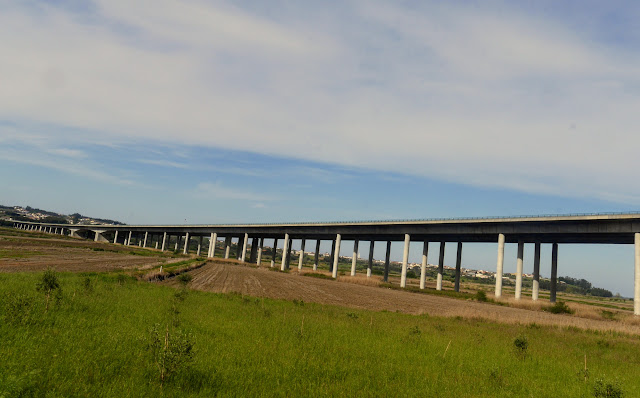 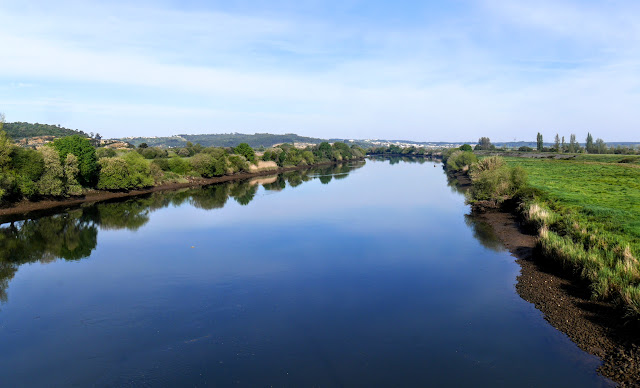 I was glad to leave Figueira da Foz this morning. After hours spent listening to the boom of dance music (it stopped abruptly at 3 in the morning) I was short of sleep and feeling just a little sorry for myself. The route out of town didn't improve my mood. Because of a river, it involved heading east for 20 kms, crossing a bridge and then heading in opposite direction for the same distance. On the way I passed beneath two spendid motorway bridges but the Eurovelo doesn't seem to use the motorway network. 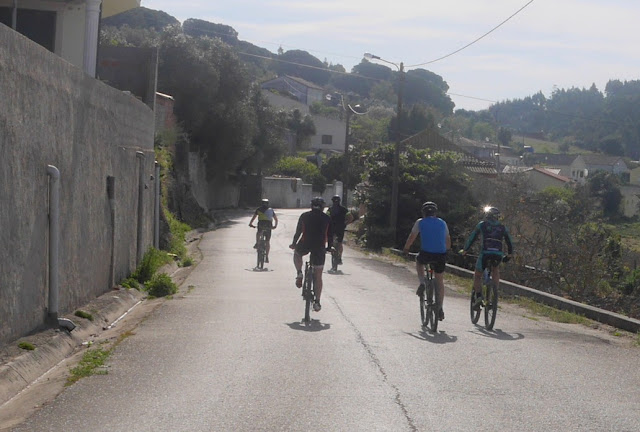 By the time I was heading in the right direction (south) I was not only grumpy but I was also getting a graving for caffeine. On the coast every village had at least one cafe but inland the villages were coffee free zones. I'd cycled 45 kms before at last I found a village big enough to sell anything.

By 11 o'clock it was also getting hot and windy. There was a steady wind blowing straight out of the Sahara (the woman in cafe said that it felt like August rather than April) and despite a coffee it was hard going. Although I'm cycling an adopted Eurovelo there are absolutely no signs and trying to read my GPS through sunglasses in bright sunlight was a challenge. I was constantly having to return to a missed junction. 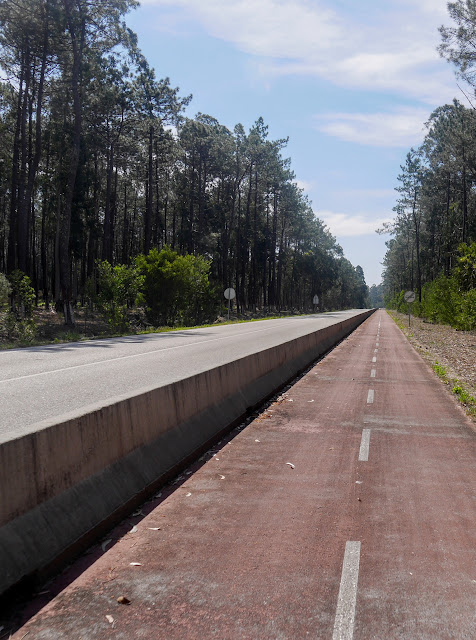 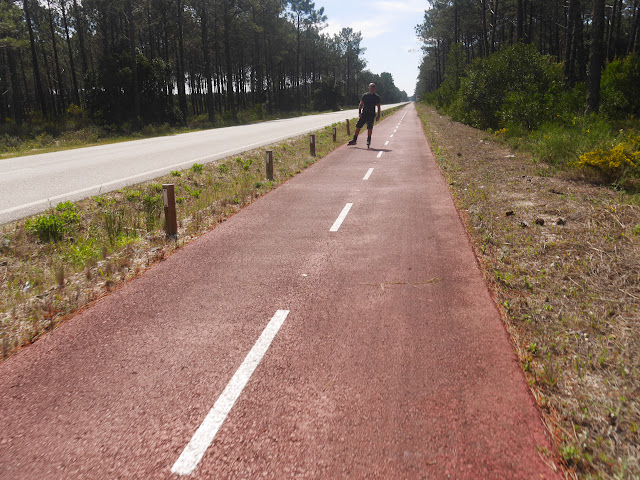 At about 11-30 I swung round a empty roundabout on the other side of which, running parallel with a empty road, was a beautiful empty red cycle path. The surface was perfect and better still it was heading in the right direction. For much of the time I was still cycling into a head wind but the surface was so good I hardly noticed. The path must have been 15kms long and during the time I was on it I saw one other cyclist and a man on skates. 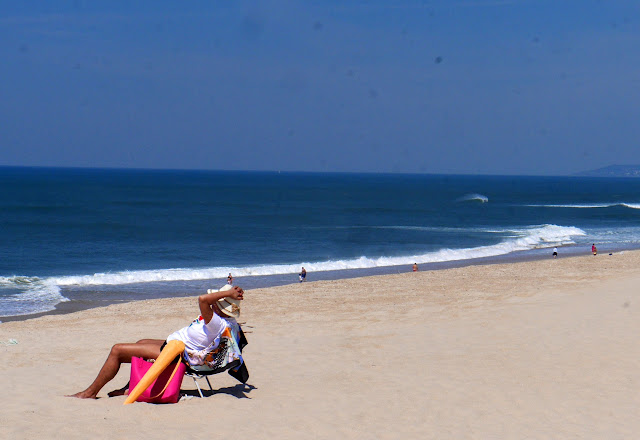 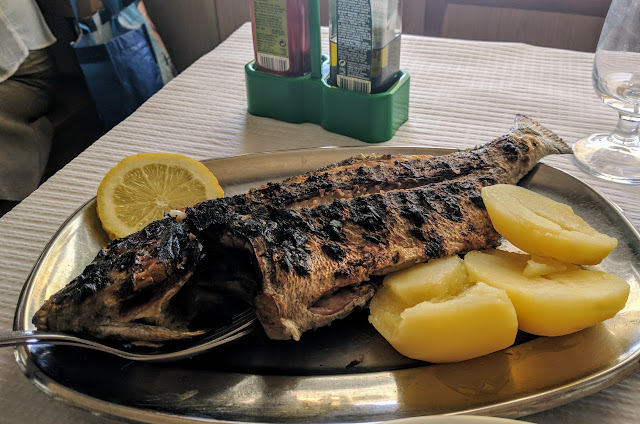 After 70kms I hit the coast again, I'd only got 20 kms to go, so I stopped for lunch at the first resort I came to. All the restaurants on the seafront were busy and people were queing for tables but a bar one street back was much more relaxed. After a local game they started to show live English football on the television in the corner. Although not quite as nice the baby squids I had yesterday, the barbecued Dorado more than did the job. 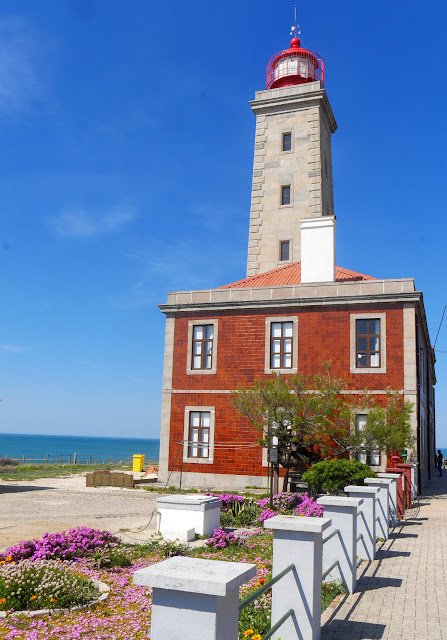 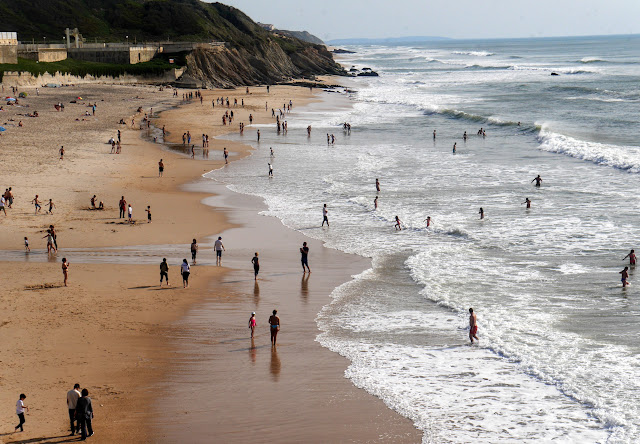 So I'm now in San Pedro de Moel. I'm staying in a small apartment where bed and breakfast is costing me the princely sum of 28 euros. Even with the fall in the pound this is great value particularly when it's so nice. Tomorrow I'm heading down the Silver Coast and it's only 50kms to the next hotel.
Posted by John Hayes at 7:40 PM