Today I've had a really nice ride on my bike. The scenery has improved, I met of a couple of Dutch who were doing something nearly as mad as me, and I visited the beach that has the world's biggest waves. The ride was just over 60 kms long with 1100m of climb which, after a couple of 90km days, felt really civilised. 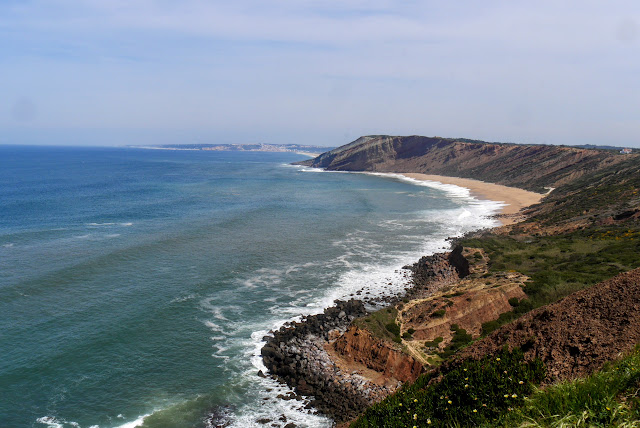 The coastline has become really beautiful. It is now rugged with towns located in proper sandy bays surrounded by multi coloured cliffs. 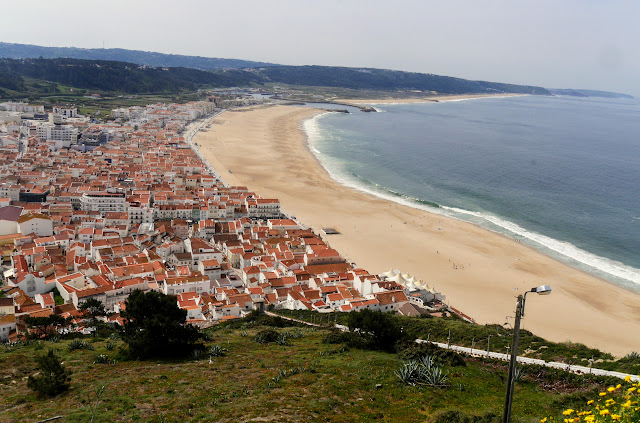 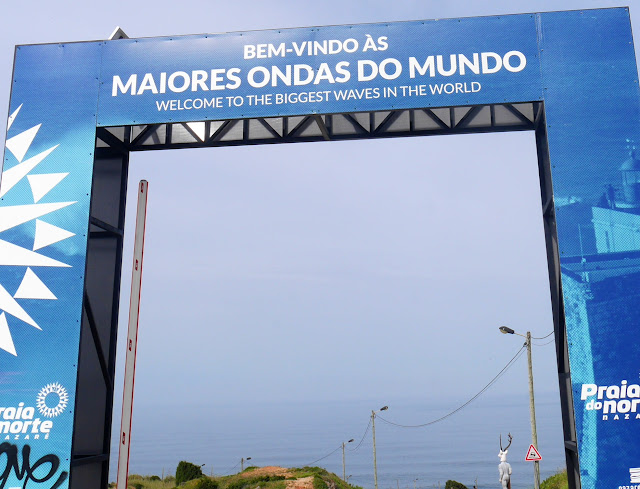 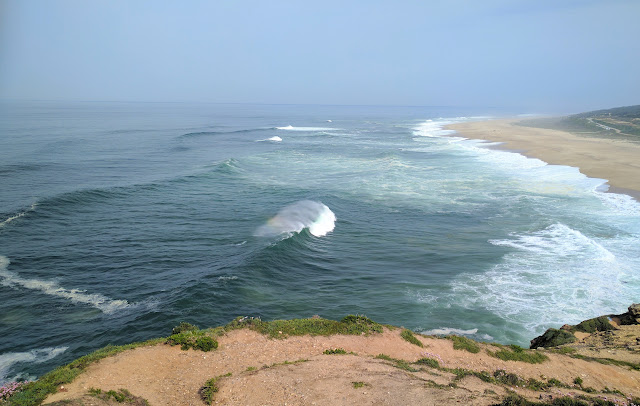 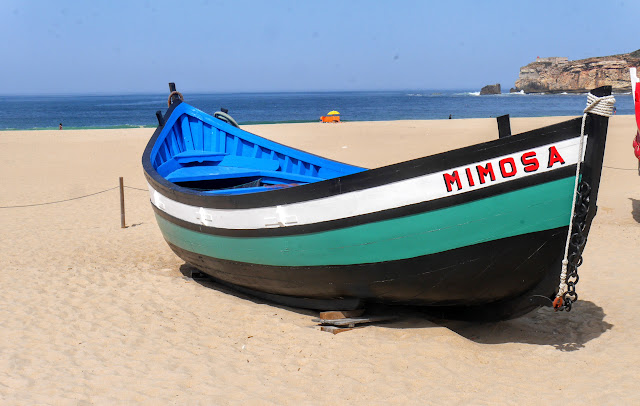 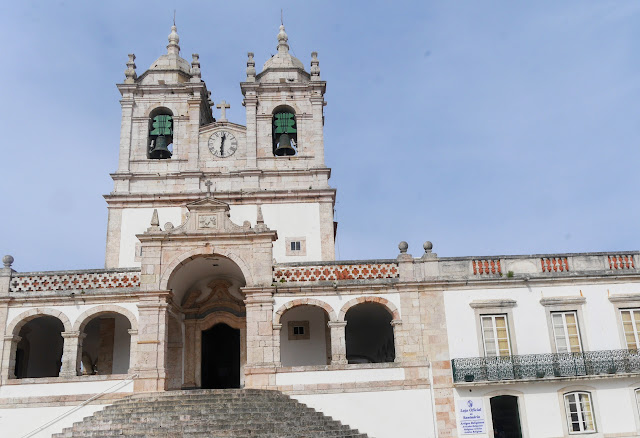 The first town I visited was Nazare, two places really, the old town on top of cliffs, with its monastery, and the new town below with its port. Immediately to the north of the old town is a beach that hosts the world's biggest waves and where surfing records are constantly being broken. The current record involved a 73 feet wave, a feat achieved three year's ago although, subject to verification, this record may already have been broken. Apparently a canyon just off the coast, and thousands of miles of uninterrupted Atlantic, make this place special. Today the waves were big but not epic, I'm a couple of months too late for that. 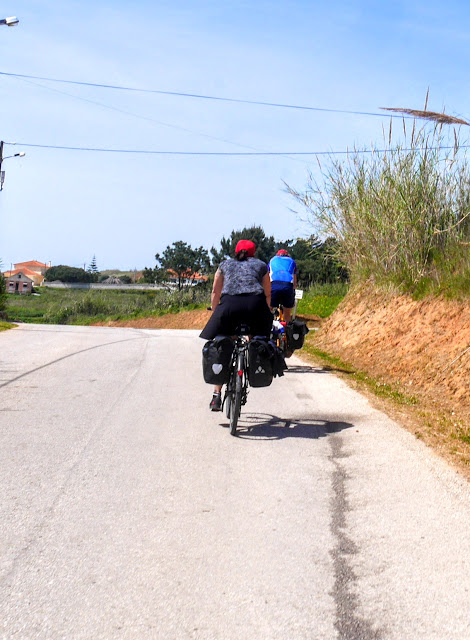 The second town I visited was San Martino do Porto. Actually I was led slightly astray by two cyclists who I decided to follow to get a break from the navigation. A Dutch couple they are cycling from Porto to Lisbon, staying in hotels but pushing bikes each ladened with 4 panniers. They were very envious of my light weight set up. They also found it hard to read their GPS in the sun and following them I missed a junction. 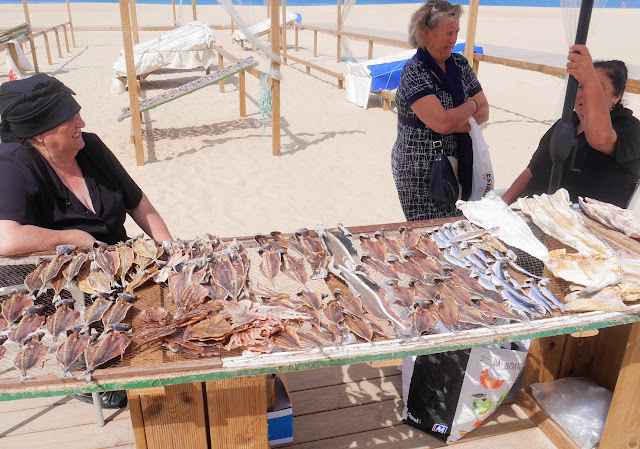 Anyway no harm done and the slight detour couldn't detract from another lovely destination. San Martino do Porto sits on the north side of a large bay the entrance to which is through a narrow rocky gateway. On one side of gateway huge Atlantic rollers crash noisely against cliffs while, on the other, its sheltered and calm. On the inside is a large shell shaped lagoon with sandy beaches - a perfect place for a family holiday.

Foz do Arelho is another beautiful place sitting to the north side of an estuary, the end of which has been partially closed by a sand spit. I'm cycling round it tomorrow so I'll report back then. 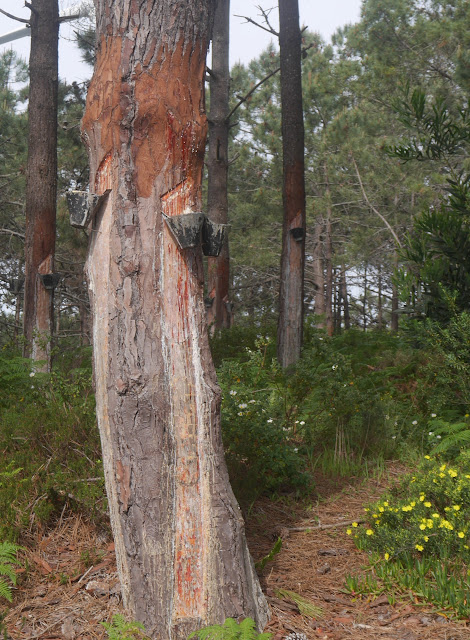 A couple of other things I've seen for the first time today are dried fish stalls - so many different sorts of fish - and the pots attached to the pine trees to collect resin. Apparently it doesn't do the trees any harm but I have my doubts.
Posted by John Hayes at 6:47 PM