Zafra is a very lovely place but getting to it proved tough. The weather was difficult and maybe we were still recovering from yesterday, as we were totally wiped out by the time we arrived. 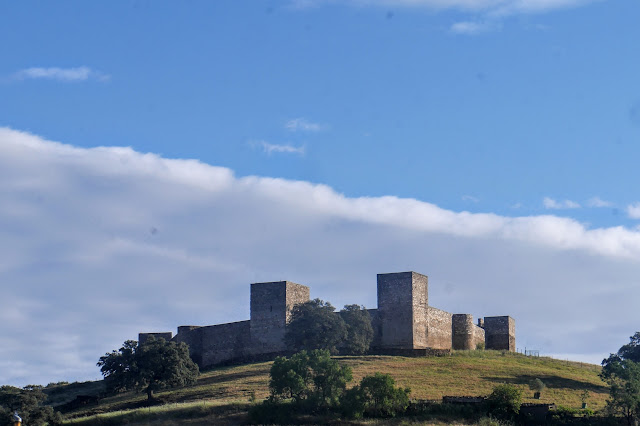 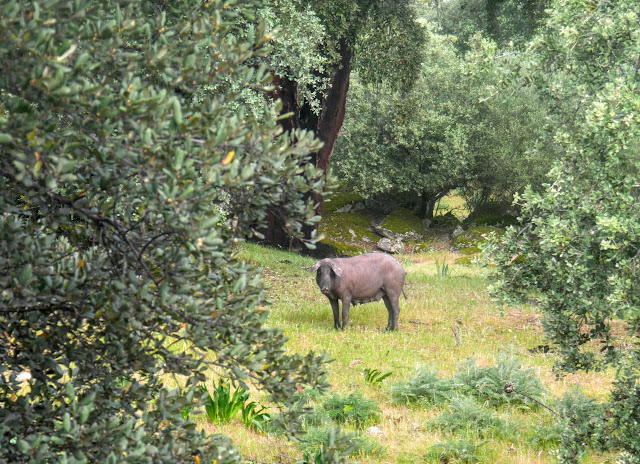 The ride wasn't quite as long as yesterday's, 80 kilometres, but there was another big climb and today we topped out at 760m. The weather wasn't good. Initially it was very cold, then very windy and then finally, in the onslaught of the elements, it started to rain. It was forecast to rain and that put pressure on us to get a move on, and given the temperature I really didn't want to get wet so the normal pit-stops were kept to the bare minimum. 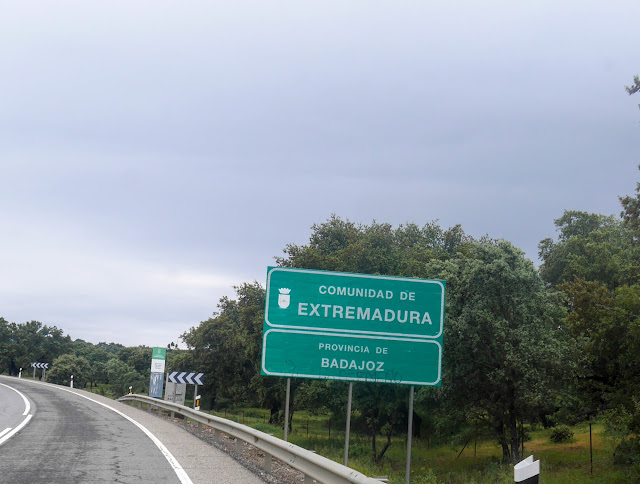 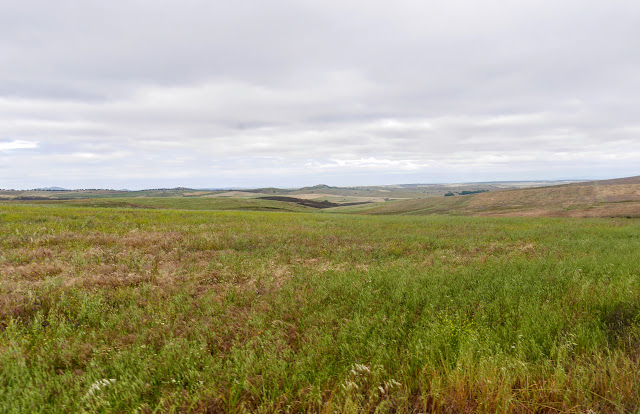 Today we left Andulucia and entered Extremadura, part of Spain I've never been to before and was looking forward to visiting. 15kms after crossing the 'border' there was an abrupt change to the scenery. The beautiful wooded pastures, with holm and cork oak forming a loose canopy of evergreen trees, suddenly ended and were replaced by wide-open rolling arable landscape. Huge, almost endless fields of barley and oats, broken occasionally by some isolated pig farm, it felt like we had been transported to the American mid-west.

It was very cold when left El Real de la Jara just before 9am. We're 500m higher than yesterday and we felt the difference. Christine was so cold she insisted that we stopped at the first coffee bar despite only covering 8kms. Already it was clear that with rain forecast by mid-day we would have to do a little surgery on the route so decided to stay on the N630 and miss the little detour to Montemolin. 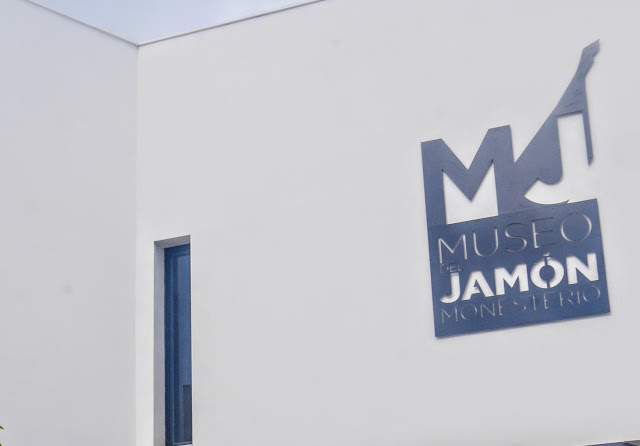 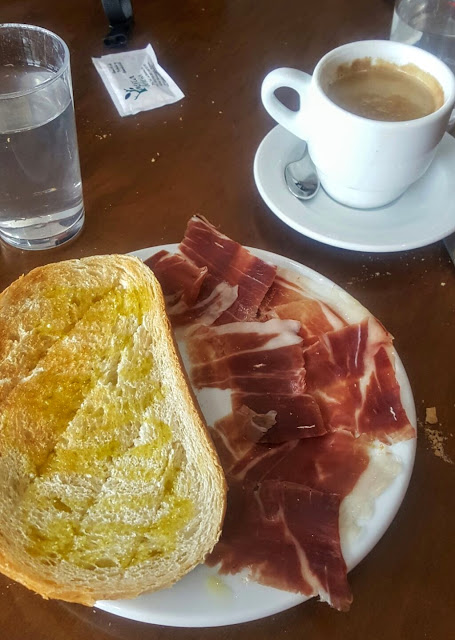 The big climb up to Monesterio went well. There was a cycling club following us up and Christine was determined not to let them catch us. It was a relatively easy climb up beautifully graded tarmac and again there were no cars. Monesterio, a white hilltop town full of interesting old buildings, is one of many places in Spain where the production of Jamon (ham) is celebrated and it even has a ham museum. After the climb we had our own little celebration and enjoyed a plate of ham and tostados in a cafe packed with locals. 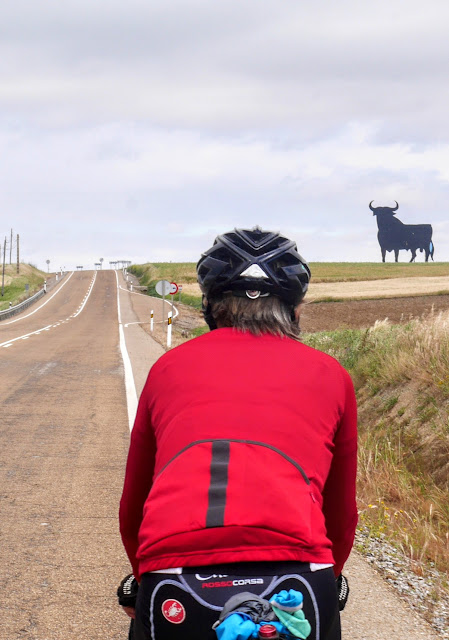 On a warmer day the next stage would have wonderful. The countryside was wide and open and the road fast and gently undulating. By now however it was really windy and, although the wind was hitting us from the side, it was hard going. After a long day on the bike yesterday, Christine was also starting to get saddle sore. 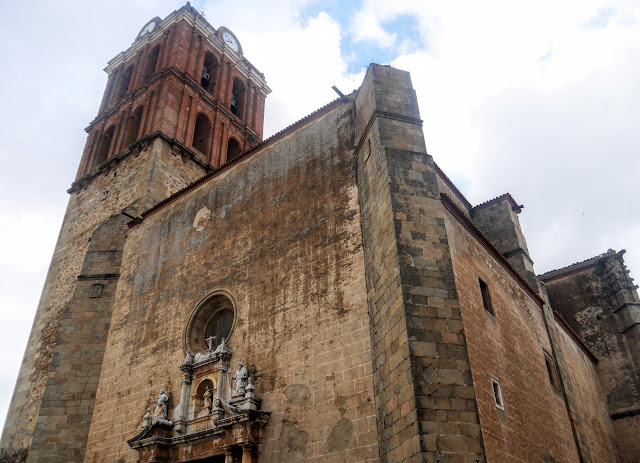 The final stretch to Zafra was straight into the wind and as we approached the town it started to rain heavily. The cobbled streets became instantly slippery and treacherous the battery on my phone, perhaps also suffering from cold, decided to die and we couldn't find the hotel. Have wandering aimlessly about the narrow streets, constantly getting colder, Christine managed to find it on her phone. The extra 10mins in the rain felt like another twist of the knife. 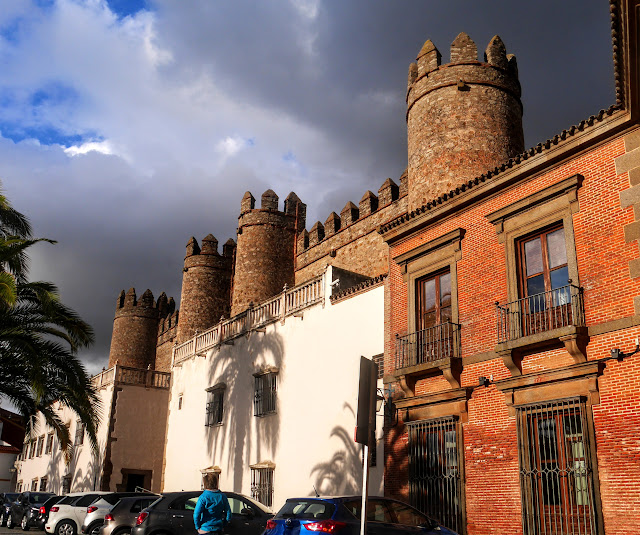 Still all's well that ends well. We were in the hotel, a very comfortable one, by 3 o'clock which meant we had plenty of time to get showered and find a restaurant for lunch. The hotel we're staying in is lavish, very Spanish, with endless pictures of bull fighters decorating the walls. Apparently this is where they stay when they attend that annual bull fighting festival. 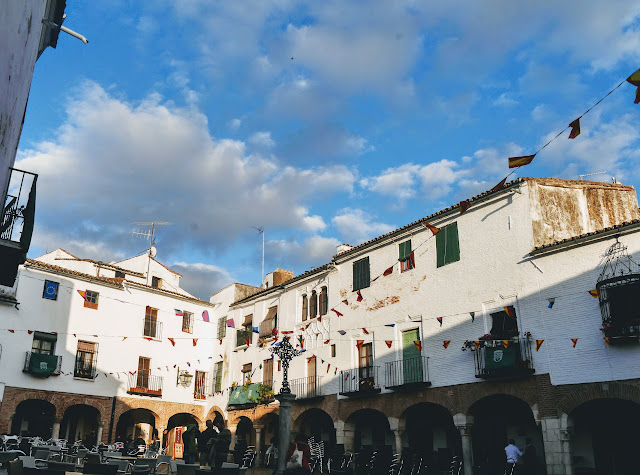 After lunch, and a very pleasant 90 minutes listening to the commentary from the north London derby, we ventured out into Zafra. It's ancient centre is stunning, narrow streets and interconnected squares with covered walk-ways. The town looks likes it's designed for heat, something not needed today.

This is a fiesta weekend and although it's Sunday night the boom of fireworks and heavily amplified music echoed round the town. After a day like today there was no way we were going to join in so we sneaked off to to our room and went to bed.
Posted by John Hayes at 8:28 AM