To get from Seville to Gijón along the Ruta Vía de la Plata involves crossing three east west running ranges of mountains, the Sierra Morena, the Sierra Gredos, and the Cantabrian Mountains. Today we just about got to the top of the Sierra Gredos and at 964m reached our highest point so far. We have another 200m to do tomorrow but the hard work is behind us. 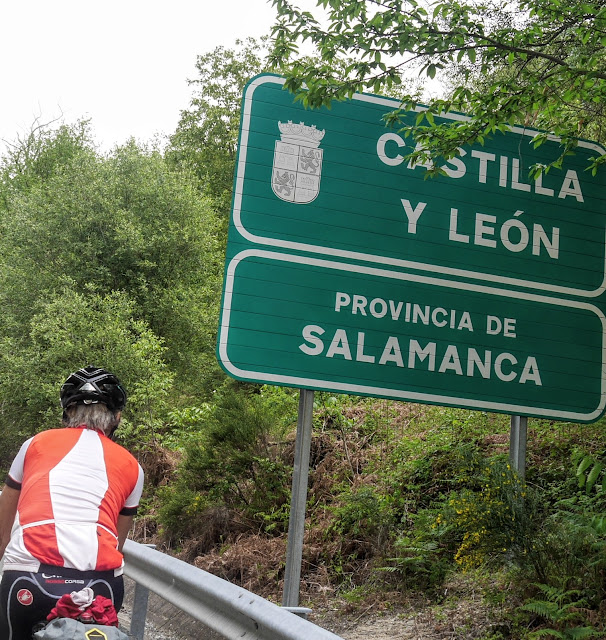 Actually it wasn't that difficult. One of the benefits of following a significant road like the N630 is that it's well graded. If a huge lorry can grind its way to the top then so can a pair of geriatrics on bikes, and we never really struggled. Still it did feel good and as we zoomed into Bejar; we were buzzing and both of us wanted to carry on to Salamanca. This would have been a terrible mistake and sense eventually prevailed as the effects of the day's efforts started to kick in. 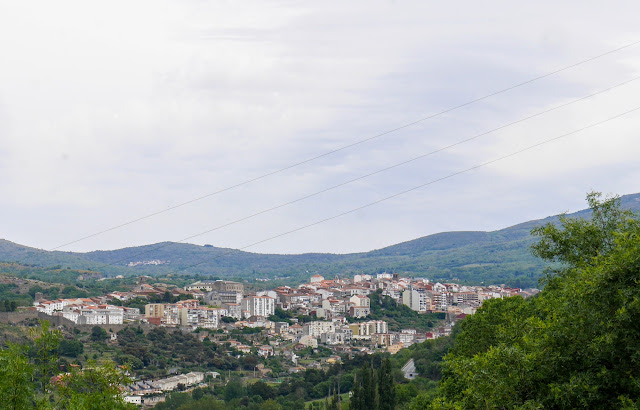 We got away from our lovely hotel in Plasencia in good time (it's another town by the way that boasts the remains of a huge Roman aqueduct) and were soon tracking the motorway along the faithful N630. The prospect of the climb ahead overshadowed the morning and with the mountains closing in, some snow capped, we were constantly anticipating which gap in the mountains was the pass which would need to be climbed. 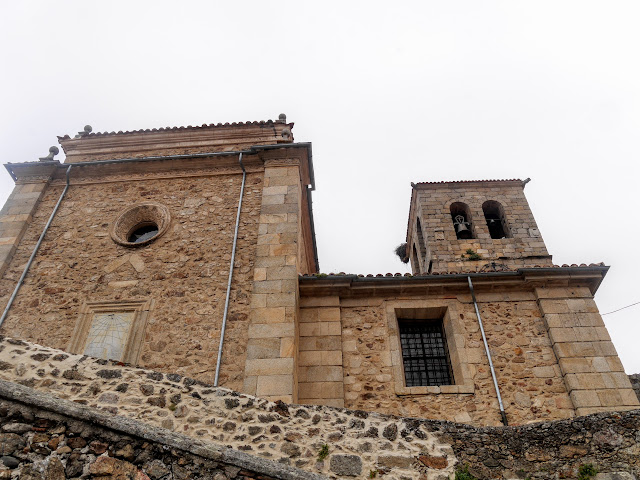 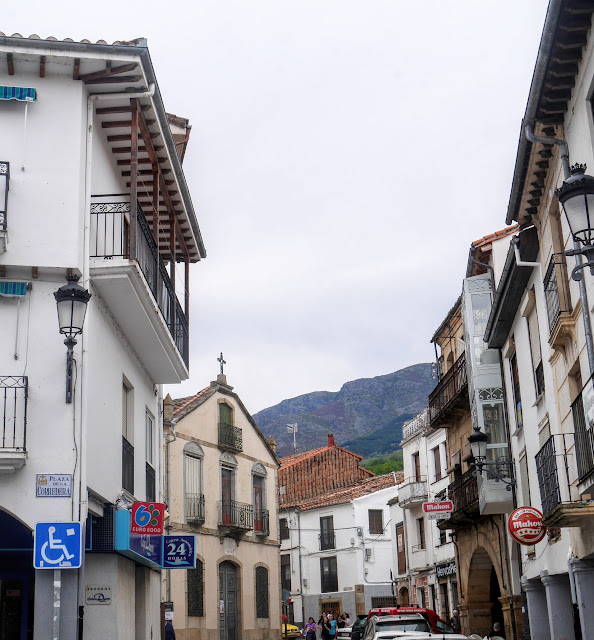 Christine had said she wanted lunch at Hervás, a town just off the N630, and according to our Dutch taxi driver who took us into Seville, it's a real beauty spot. The town was a bit of a disappointment and it was difficult to find the centre. Worse still we were too early for lunch. Christine finds to hard to accept that the Spanish daily routine is tightly defined and that they won't change it to suit is. Generally if you want lunch you have to wait until at least 1-30. 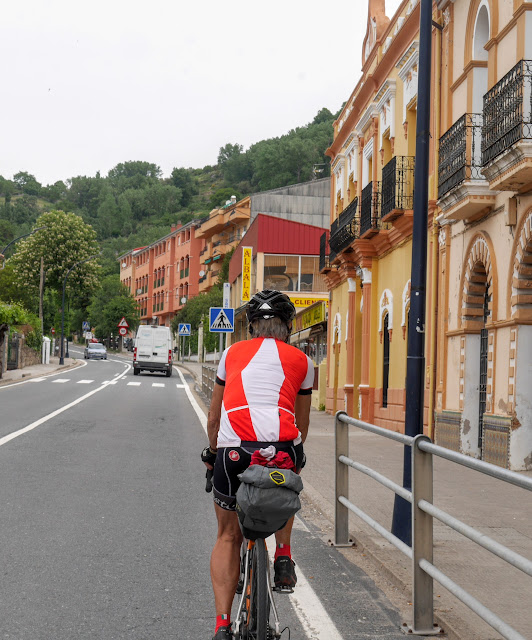 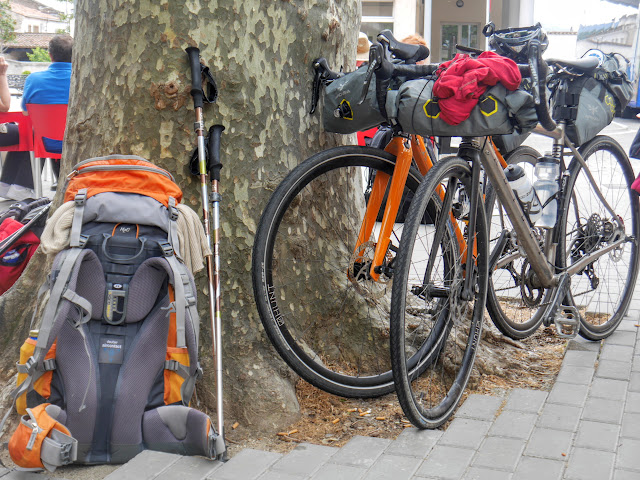 Leaving with empty stomachs we pressed on to Banos de Montemayor which we liked a lot more. Getting there took a chunk out of the climb and when we arrived the restaurants were open.

After a light lunch (black pudding scrambled into eggs, delicious) we were pulling our way up to the pass and across the border into Castille y León, the third Spanish region on our journey north. The scenery and vegetation changed noticeably as we gained height with evergreen oak giving way to descidious trees including lots of sweet chestnut trees. 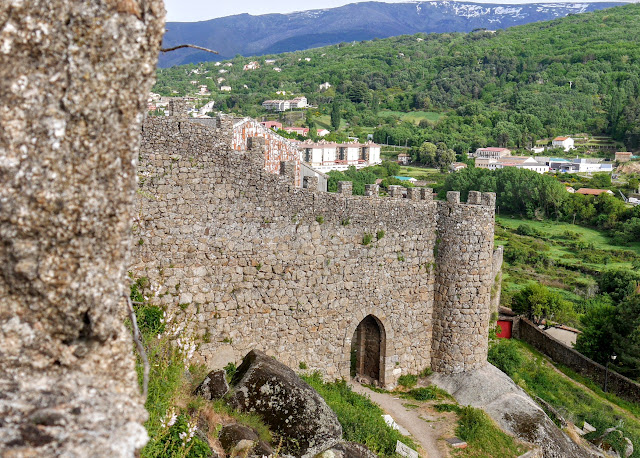 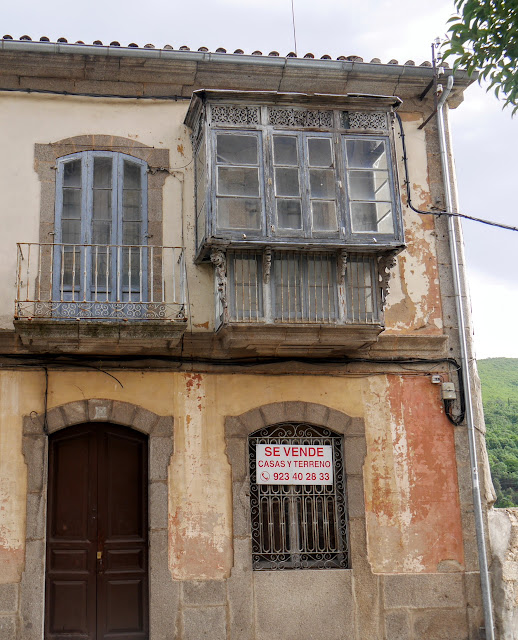 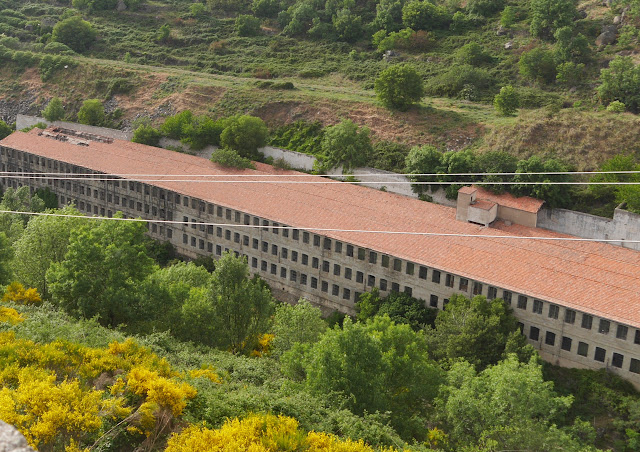 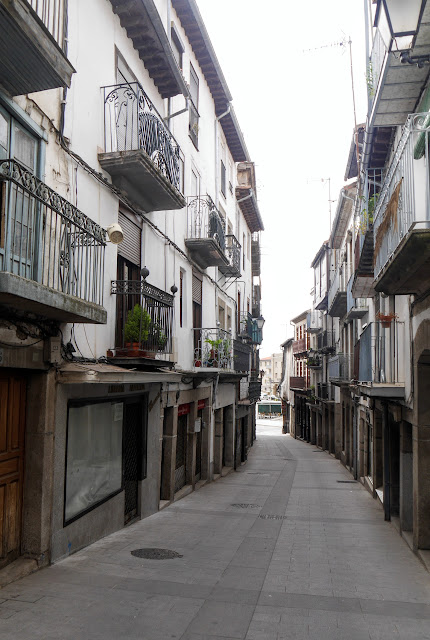 Swooping down to Bejar, it's striking location was instantly apparent with the town located on a long plug of rock with river gorges on both sides. The ancient Moorish walls of the town can be seen particularly well from the south and large severe looking granite buildings give an unwelcoming appearance. It is in fact a very poor place and its huge legacy of medieval buildings is unloved and decaying. The contrast with other recent overnight stops at Zafra, Mérida and Plasencia couldn't have been more pronounced, with this place relying on impoverished locals to keep it going. Apparently 50 years ago it was one of richest places in Spain with a successful textile industry. The huge factories are still there but they are empty and in disrepair, as it's no longer worth the effort even to knock them down. This place is for sale but unfortunately has yet to find a buyer.
Posted by John Hayes at 3:46 PM