My perfect day in Spain now has a number of well defined ingredients. Start cycling around 9, or slightly before. Have a coffee con leche at about 10-30 and another at 12, ideally with a bite to eat, and then finish cycling around 3. This gives me time to check-in, have a shower, and then have lunch. I then do my washing and slob around. At about 6, I go out for some sightseeing, say two hours max, then find a bar, ideally with craft beer, eat some tapas and write this blog. All being well I'm back in bed by 10 getting ready to do it all again next day. 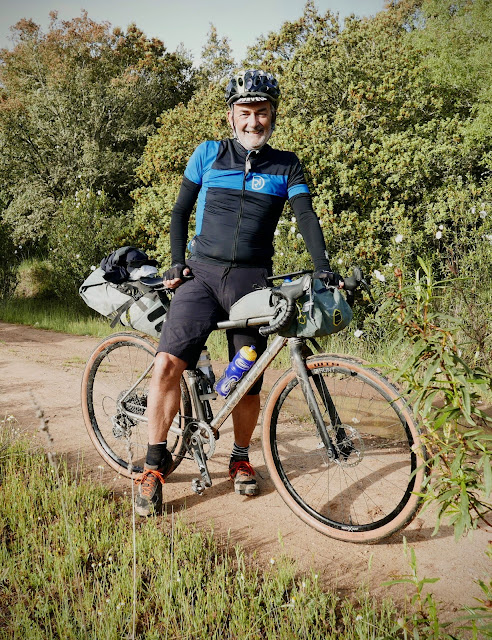 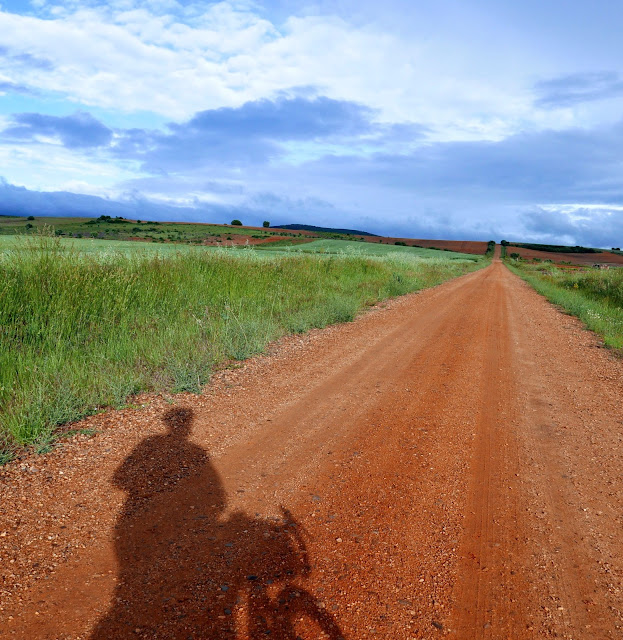 To make this bicycling cycle work well, I need nice places about 6 hours apart. By nice places I mean a hotel, restaurant, some interesting places to look at and a decent bar. Apart from the first day, the Ruta Vía de Plata works perfectly, although my craft beer recommendations are not quite complete. On the Camino Sanabria it's much more of a struggle. From Zamora to Santiago del Compostela is 400km and there are only two places along the route where there is a choice of hotels, let along somewhere selling craft beer, and that's Puebla de Sanabrés, where I am now, and Ourense. Most people spilt today's stage which means staying in three, one hotel towns.


You could regard my ideal cycling day as indulgent but the trouble is after the Ruta Vía de la Plata that's what I’ve got used to and that's what I want.


Because today's leg was a big longer than is ideal (95 kms - off road) and because the weather looked dodgy, I set off earlier than usual. To be honest there wasn't much to stay for.


Apart from the very last stretch, the route was good. After heading north, it turns west climbs and gently along the valley of the Rio Tera. Like most rivers in Spain it has a dam across it every 20 kilometres and it switches several times from river into reservoir mode. 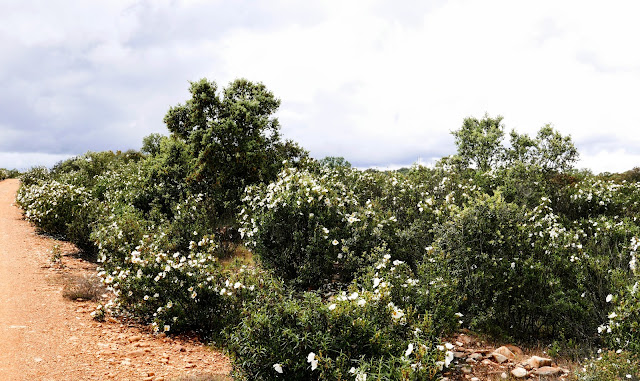 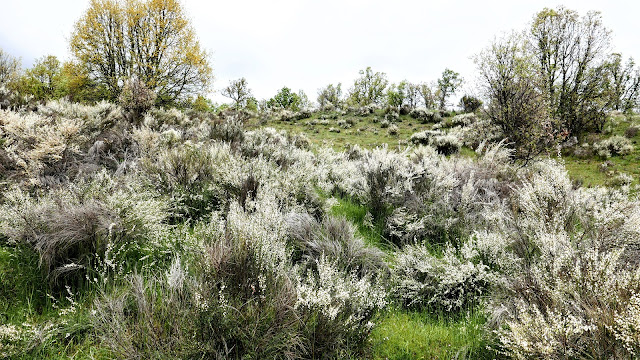 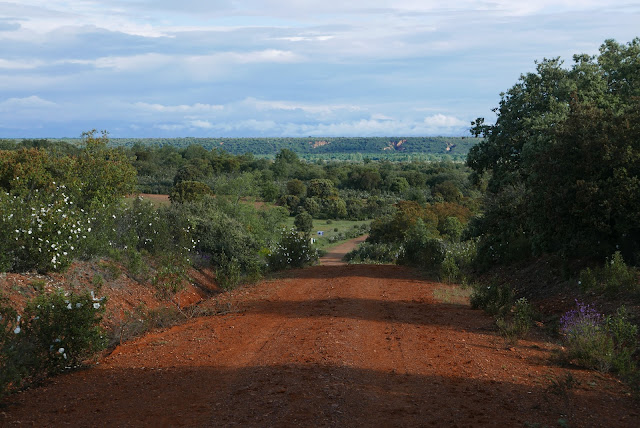 The landscape was dominated by woodland and heath, nice to cycle through but not a touch on the Dehesa. Particularly pretty were the cistus, white flowers here, and the broom both white and golden yellow.


This feels like a poor part of Spain. The villages had the minimum in terms of facilities and I struggled to find a place for my first coffee stop never mind my second. Still the cycling was fast and easy, and a 15 km an hour schedule was maintained. 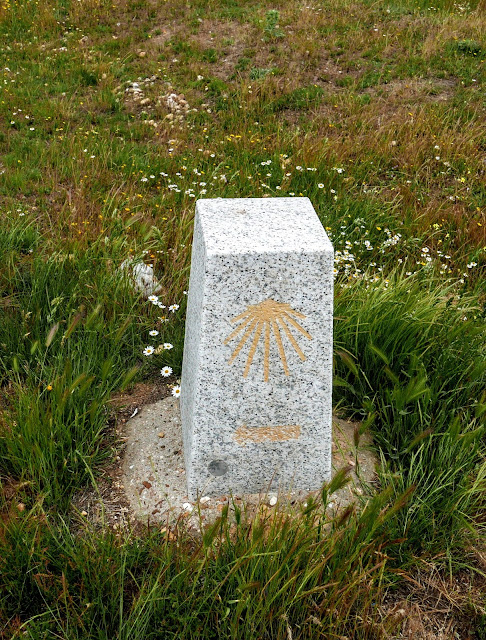 I eventually stopped at an auberge in a village called Villar de Farfón whose owner, a South African put me write on a few things. I told him I thought the route had changed in a few places. He told me that if I had been following the big granite markers, which I had, then I had been following the cycling route. This is not quite the same as the walking route although walkers get misled as the signing on the cycling route is better. This is actually great news, possibly obvious to anyone who can read Spanish, but it means that I shouldn't end up anywhere that's really dangerous.


That said I left the auberge went across the heath on a narrow but soft grassy path, headed down a hill, hit a muddy rut at the wrong angle and fell off.  Second fall but no harm done.


I hadn't booked any accommodation and, if it was raining, intended to stay at Mombuey. I saw the hotel and it looked OK, but not somewhere to hole up in all afternoon. I met two women from Belgium last night who were using a bag ahead service. They hated Tábara (which wasn't so bad) and had refused to eat their dinner.  I don't think they'll be any happier at Mombuey. Judging by the number of white vans and lorries parked outside, the food should be OK, but I’m not sure if they’d appreciate lorry driver company. 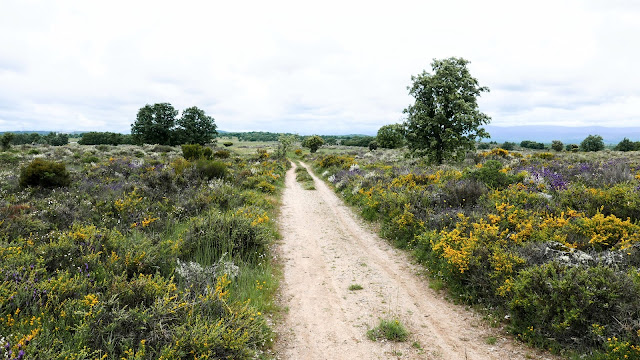 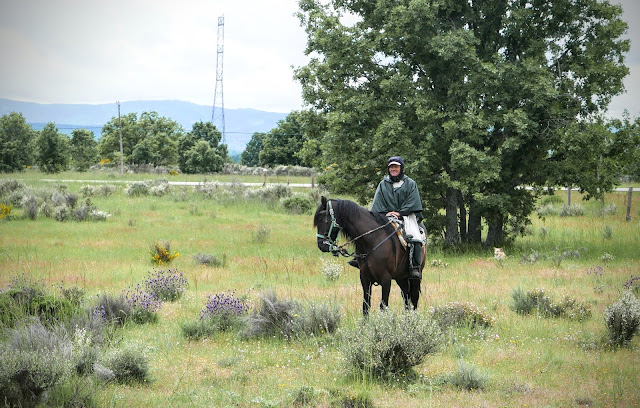 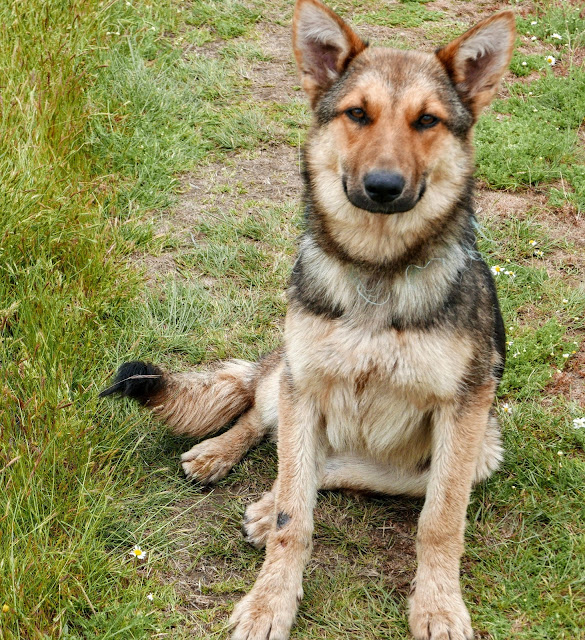 It was only drizzling so I pressed on passing through more forests and crossing more heath's. On one of the heath's, two men on horses were watching over a large herd of cattle. The picture of the cowboy is a bit disappointing but it's a better one of his dog. 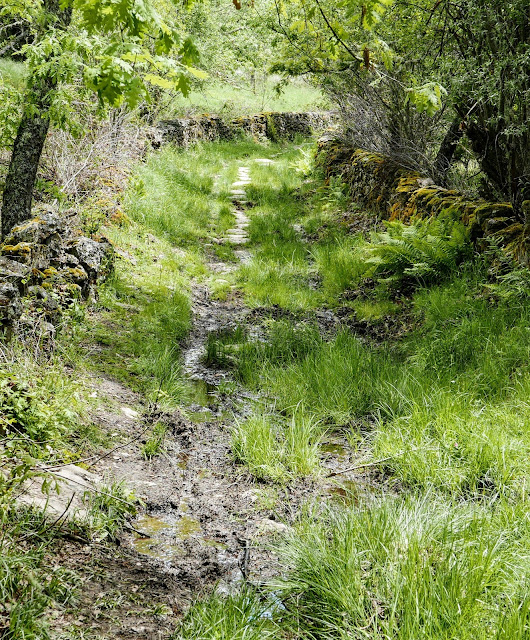 Just beyond Asturianos the route became impossibly wet so I abandoned it, joined the N525, (the equivalent of the N630) and blasted my way to Puebla de Sanabria. It was 10 to 3, I had to choose a hotel, get showered and eat something. I checked on booking.com, found somewhere that looked good and negotiated a better rate - clever me.  I had lunch in the hotel restaurant, which was OK apart from me being the only one there. Explains the room price I guess. 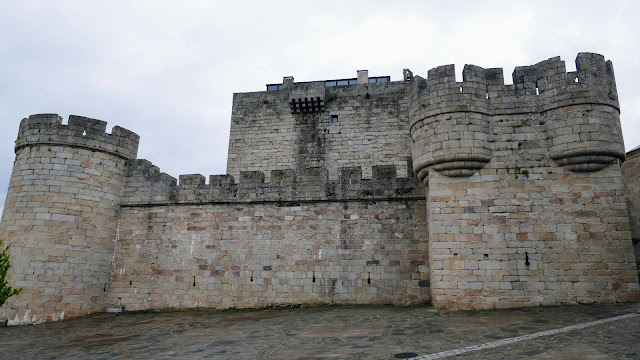 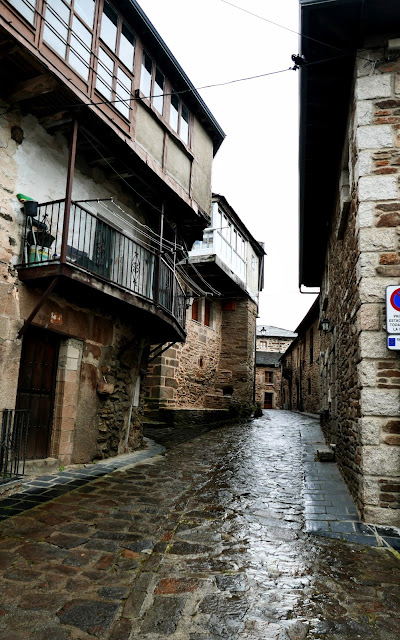 At the moment Puebla de Sanabrés is a tourist place without any tourists. It's a pretty, although the granite buildings are a bit severe, and like Zamora and Béjar built on a rock that forms the perfect defensive position. It has several really smart looking hotels and restaurants although nowhere selling decent beer.