If I’m honest the stretch of off road cycling from Leon to Pola de Lena, where the Ruta Vía de la Plata crosses a big pass and descends down into Asturias, had me worried. I did the road route last year and that was wonderful, an easy steady climb up to the pass and then an exhilarating 1000m descent sweeping round hair pin bends. I was nervous about that 1000m descent off-road.


Before coming out here I asked the Ruta Vía de la Plata Association if it was safe and they said yes it was because the path is wide. After some tricky cycling in the Camino Sanabrés my confidence had declined so I started checking again and found a review that said the route was difficult and shouldn't be attempted unless on a mountain bike with double suspension. I decided not to do it - getting home in one piece is the most important thing. It still nagged though, particularly as there would be big gap in my knowledge about the route for the guide.  I then found another review which confirmed what the Ruta Vía de la Plata Association has told me, that it wasn't difficult. I was stuck in the headlights so I decided to defer my decision to the last possible minute. 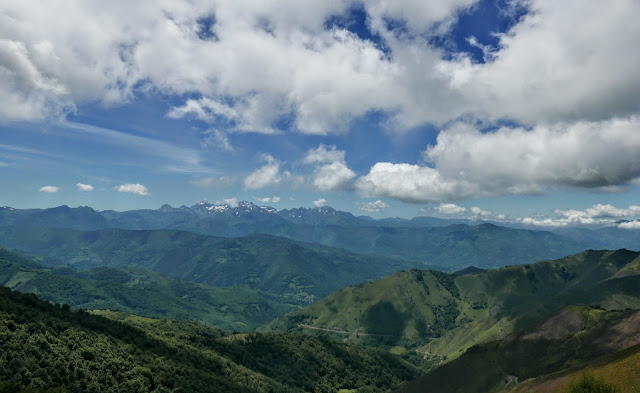 I did it of course and it was brilliant, a real highlight for the trip as a whole, a shame almost that it's not the last day. The route was vehicle wide all the way and although the surface was broken most of the time and my wrists ached with strain of braking on the long descents, it was basically safe. 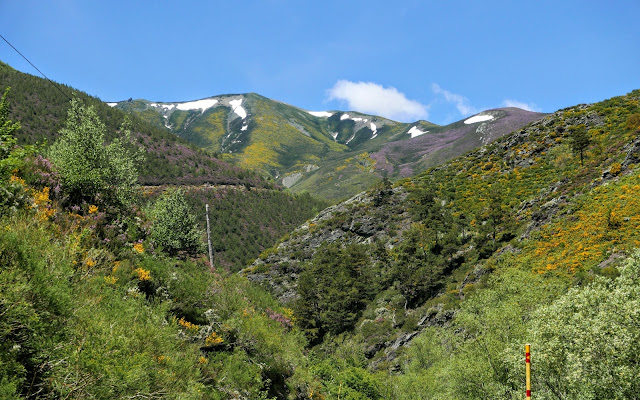 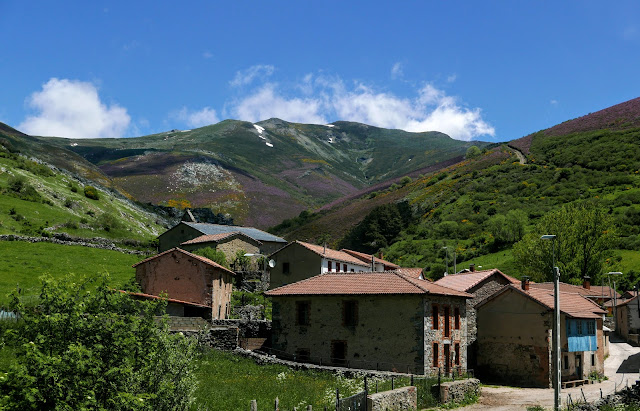 Like road route the approach to the pass is really helpful. It starts with gentle climb up a tarmacked road up a lovely valley to the tiny village of Pendilla de Arbás. Following an old Roman road, the route then continues on a farm track that doesn't get really steep until the final approach to the pass. 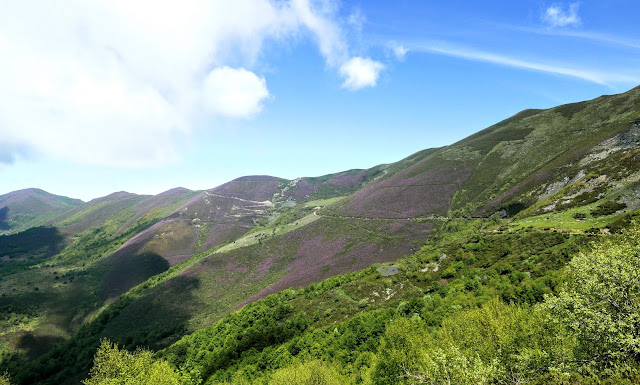 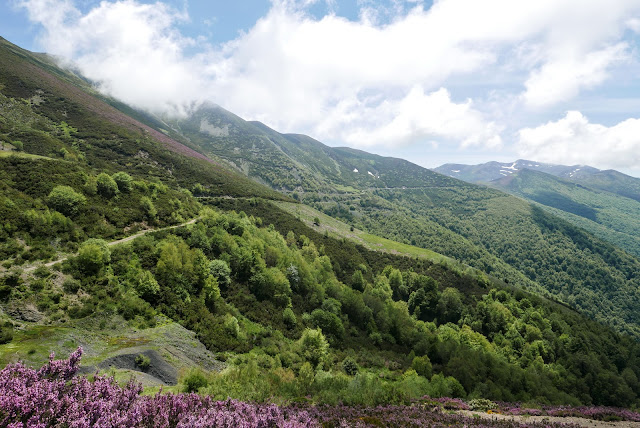 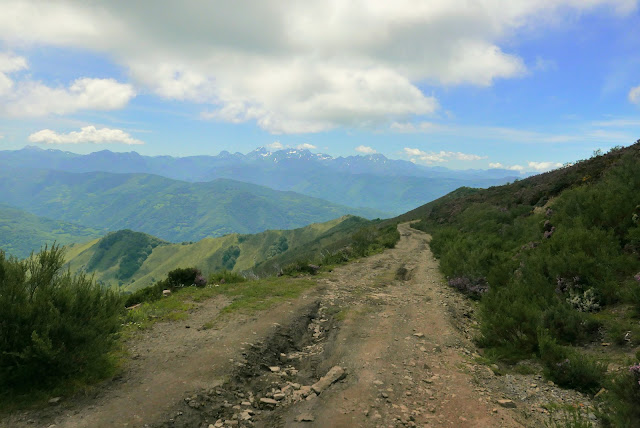 On the road route, as soon as the pass is crossed the descent starts. It's totally different on the off-road route where the Roman contours along the side of the valley for about 25kms. It's an amazing route, quite tough with ascents as well as descents, and a nasty sting in the tail when rather than the anticipated descent you suddenly have to climb 150m. It was humid on the other side of the pass, spoiling the light for photographs, but the views were breathtaking.  Across the valley, on the horizon, was the distinct shape of the Pena Urbiña, still covered in snow and one of highest mountains in the Cantabrian mountains (you first see it as you cycle towards Leon) and then below, well over a 2000 metres below, a very deep and very green valley. Ahead looking north was a long bumpy ridge of mountains stretching into the distance with a faint line on its western flank. The line, perhaps the most impressive feature of the view, was the Roman road. 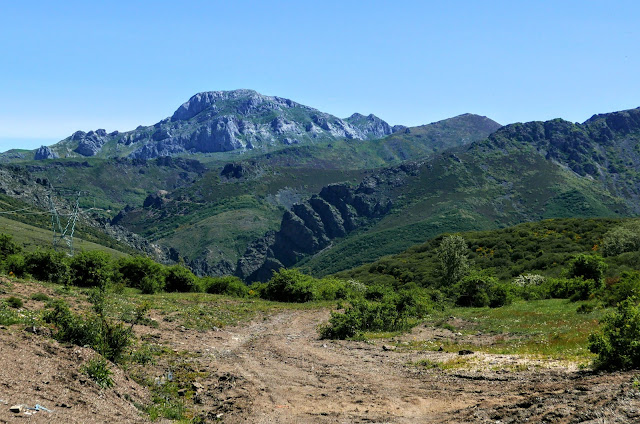 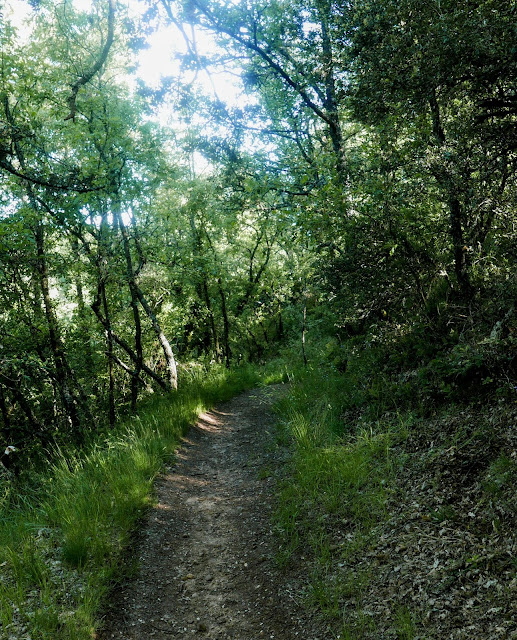 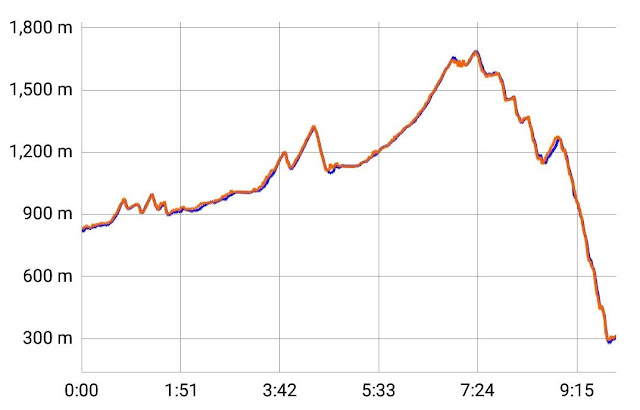 My only complaint is that the route as a whole, from Leon to Pola de Lena is just too long. As well as the bit I’ve already described there two other hard off-road sections and I was already running low on energy by the time I got to the big pass. I was cycling for nearly 9 hours, covered over 100 kms and climbed well over 3,000 metres - too much on what is predominantly a broken surface. The obvious solution is to split the route into two parts or cycle on the road all the way to Pendilla de Arbás.


The last stretch of cycling, along the Roman road, although a little challenging in places, is a fabulous stretch of cycling and competes with ride through the Dehesa, after Plasencia, as the best on the whole route. Good job I did it!