On paper today's route looked great.  It was quite long, 80km, but there were lots of places to stop. Apart from a climb in the middle, it looked fast and flat and there was even a good slug of road mixed in to keep things ticking along. The only question mark was that climb in the middle. 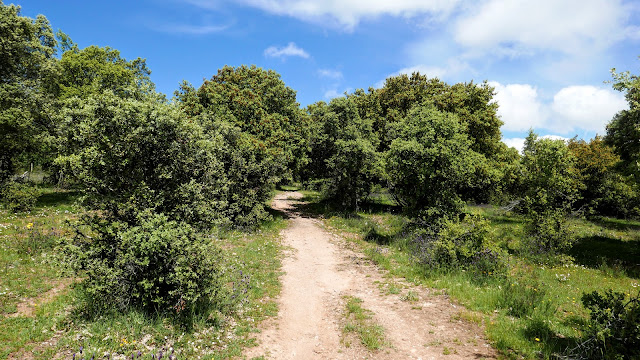 Well the question was answered.  The climb, about 200m on a badly broken track, was hard and the descent was worse. I was able to peddle nearly all the way to top, and I suspect someone a little younger would have done it easily, but it was the descent that got me. I had done the worst bit, the track was levelling out, when suddenly right in front of me was a bike trap. A gulley, impossible to see until the last nano second, dissected the track. Bang and I was flying through the air leaving the bike in the hole. Fortunately the rocky track had turned grassy but the ground was still hard and with all the wind knocked out of me I couldn't even curse.


My thumb hurt, my chest hurt, but thankfully there was no grazing. It's the grazing that's usually the hardest thing to sort out. The bike looked strange in its hole but amazingly was not damaged. I was only 100m from a road and I was soon at my planned lunch stop, drinking beer to help with shock, and complaining to three Italians about bike traps.


20 mins after lunch I was flying along a gravelly road (trying to catch the Italians) when my rear tyre deflated. This isn't supposed to happen, that latex stuff inside the tyre is supposed to find the hole and seal it up. My tyre was flat. I inspected it closely for damage, couldn't see any so decided to give it another go and pumped it up. It went flat. I tried again with, predictably now, the same result. I was coming to the conclusion that I was going to have to put an inner tube in, a task I didn't relish given my aches and pains, when I noticed an abrasion on the side of tyre away from the tread. I put some more air in and it was leaking from this hole. Cleverly I then pumped it positioned where I thought the latex might be. It worked, the hole was sealed although to be honest I'm not sure if I trust it. 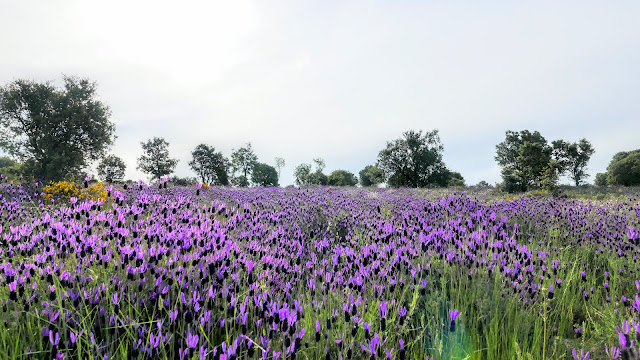 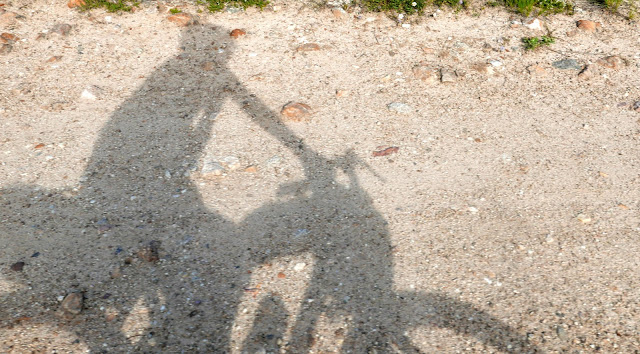 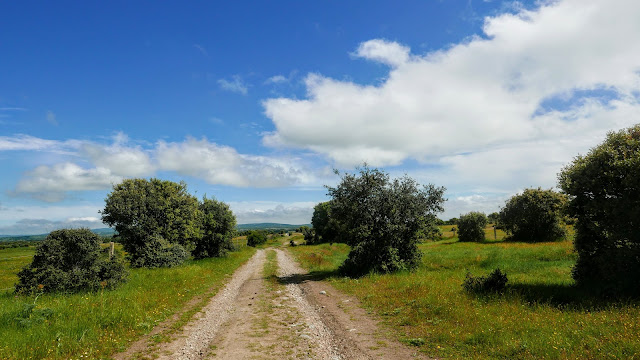 So I that's the negative stuff, apart from nearly killing myself and getting stranded miles from anywhere with a flat tyre. Apart from what you know about, the cycling was great. 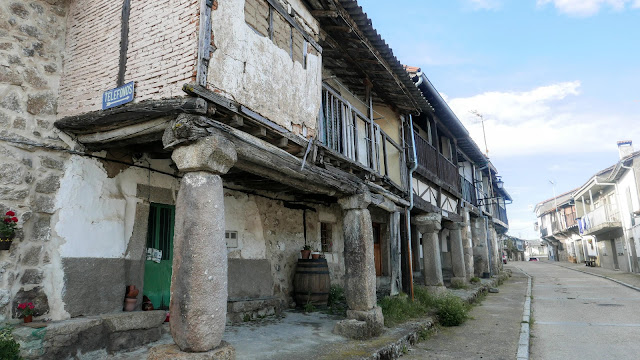 Having climbed out of the Béjar valley the route traversed a massive plain visiting a series of villages along the way all offering facilities for pilgrims. I particularly liked the first one, La Cazada de Béjar which had some lovely half timbered houses. 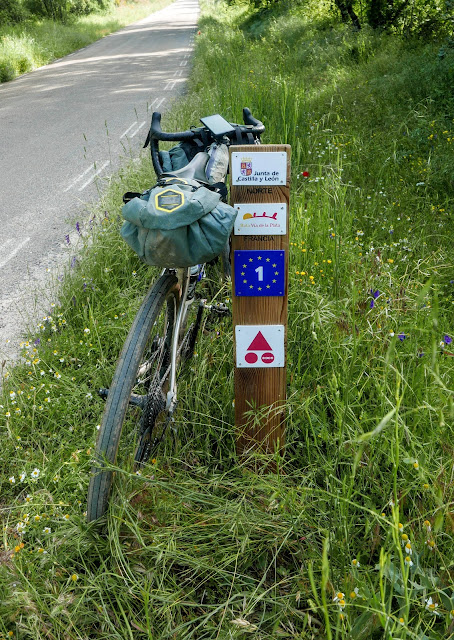 The route has now left Extremadura and has entered Castile y Leon. The waymarking have changed as a consequence and now features the Eurovelo 1 and the Ruta Vía de la Plata Association, the wonderful organisation that has helped me so much with this trip. It's great to see their branding but the routing of the Eurovelo 1 across the heart of Spain when everywhere else it's a coastal route, makes no sense. 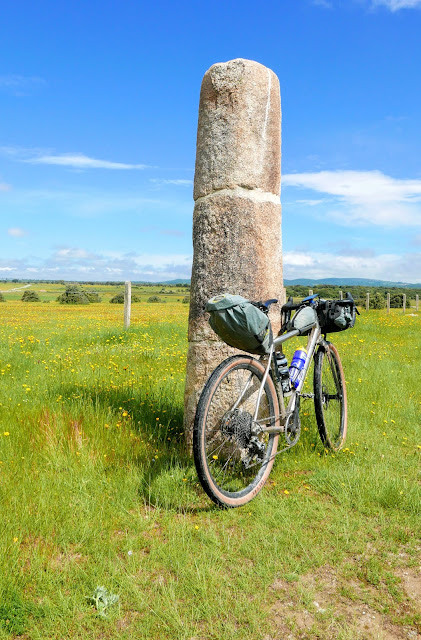 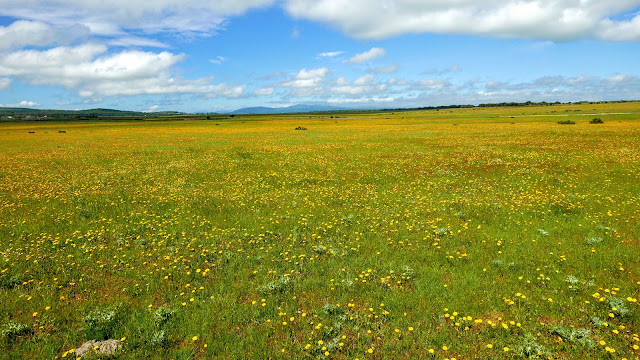 The best bit of cycling was along the old Roman road north of Fuenterroble de Salvatierra. It's epic, straight as a die, emphasising the wide open spaces, and with the original mile markers still in place.


It's at the end of this wonderful stretch of Roman inspired cycling that our route goes of the rails and climbs the hill (the Sierra de la Duna by the way). Looking at the map unnecessarily climbing a hill wasn't a mistake the Roman's made. They stayed low and straight. It must have been the pilgrims who wandered off the straight and narrow. Needless to say future  Ruta Vía de la Plata cyclists will not have to endure these mad pilgrim ways. Readers of my Cicerone guide will be able to make a minor diversion, join the road route and then rejoin the off road route at the same place my tyre went flat.


This is starting to sound like a grumpy blog. If it is consider the photograph below. A couple of pilgrims walking along a classically endless road with still with over 500 kms to go, and they're holding hands. Frankly amazing and good on them. 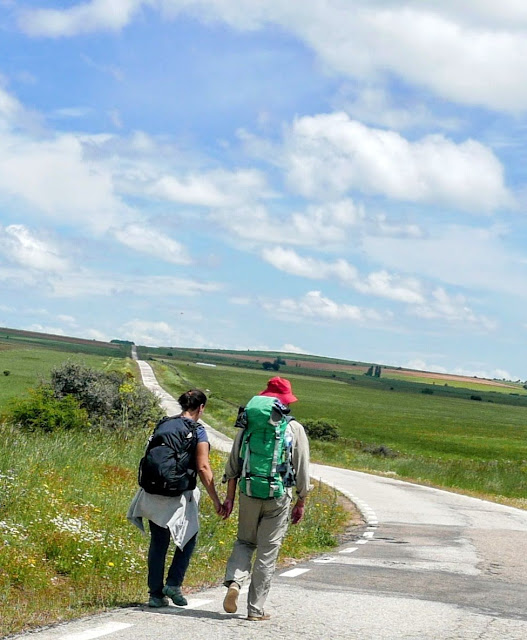 So I'm in Salamanca trying to find the best craft ale bar. It's a tough job but I'm doing my best. The city is great, a busy vibrant place with ancient buildings so big that you have to be in another town to take a picture. You can squeeze the whole of cathedral (two cathedrals I think like Palencia) if you cross the Roman bridge and go to the other side of the river. 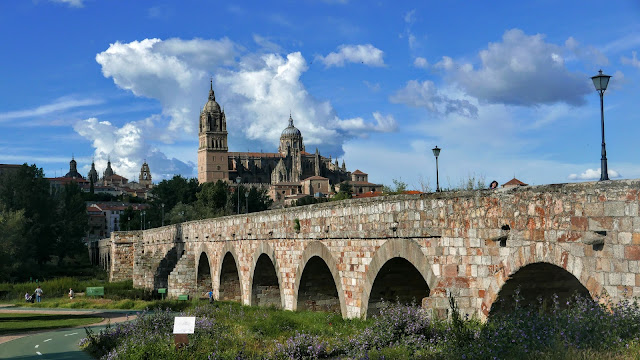 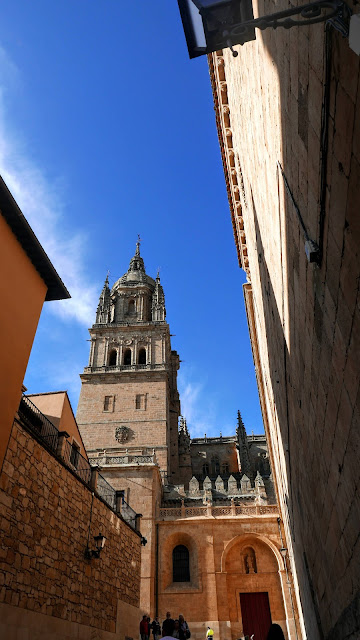 Tomorrow I will be completely recovered and it's only 60km to Zamora.