The best long distance footpath in the world? 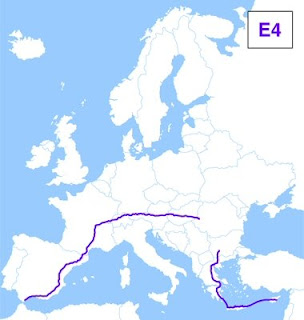 Is the the E4 Euro Path the best long distance footpath in the world? Well it could be.

Starting on the Atlantic Coast and at the southern most tip of Spain (at Tarifa) you begin a journey that takes you through some of Europe's most stunning scenery.

You cross Andulucia through a series of national parks with a northern and southern option in the middle (the northern option takes you higher into the Sierra Nevadas while the southern one is closer to Granada).

The next section, Murcia, is about 300 Km long and takes you through the spine of the province, from west to east, and includes the landscapes of the Spanish high plateau and the fertile plain of river Segura.

The next section takes you north through Pais Valencia along 550 km trek inland but on a track which parallels the coast.

The final Spanish part of the E4 takes you through Catalonia, from Fredes in the south to La Seu D'Urgell in the Pyrenees. One guide suggests that the 367 km can be covered in 92 hours and 15 mins!

The French section is 1,100 km long and crosses three national parks (Haut Languedoc, Cevennes and Vercours), and southern park of the Massif Central, the Rhone Valley and then on into the French Alps, crossing into Switzerland.

The Swiss part of the walk takes you 300 km through the Jura Park, through limestone classic limestone and along 180km ridge walk known as the the Chemin des Crêtes du Jura, or Jura High Route. At From Dielsdorf, the E4 continues along S shores of Lake Constance via following settlements to village Rheineck at German borders. (150 km)

Through Austria the route follows the Alpine Route 1, high level for most of the way with glacier and other bits of challenging walking. As well as stunning scenery you get the chance to stay in Austrian Hutte, a fairly unique experience. The Austrian part of the walk is 1100 kilometres.

Still working out the extent of my ambition in Hungary. Could stop just north of Budapest or walk on the Hungarian border and complete E4 as far as it goes in western Europe. Either way you travel along the Blue Way which, for a Hungarian, is the No 1 walking experience.

So is this the best walk in the world and is walking it in one feasible or just a mad idea. Still got a lot of work to do on the route but at the moment its looking like 190 days walking.
Posted by John Hayes at 3:32 PM