Big walk today, 43 kilometres with around 2,000 metres of ascent and descent. It was also another gloomy one with showers on a cold wind. By the time I walked into Lagran at just before 7, I had been walking for just over 10 hours.

After a taxi out of Miranda de Ebro I rejoined the GR1, at Berantevilla, a small village deposited in a wide open valley. The wind was hurtling up the valley and on a Sunday morning Berantevilla was so quiet it could have been deserted.

The first target was a ridge to the south and a climb up to the village of Portilla. In the distance I could see another walker with his head hunched into his shoulders to escape from the wind.

Portilla turned out to be a pretty village, lots a solid looking stone buildings with great views across the valley to the mountains in the north including some with snow on the top. I shared the narrow streets with a huge tractor loaded with an equally huge seed drill - the streets were definitely not built for vehicles of this size. 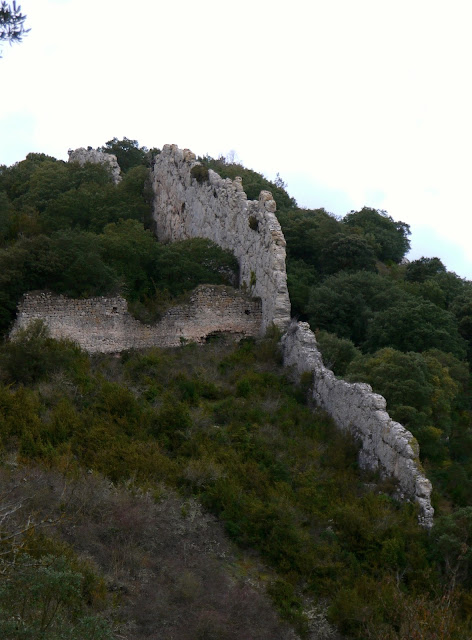 Just beyond Portilla there is a really interesting geological feature. Running parallel to the ridge, but at some distance from it, is a single strata of limestone which has withstood the erosion which has removed the rock on either side. It stands vertically, less than a metre wide but in places at least 15 metres high. The track passes through a gap in this natural wall and, once you're through it, have climbed up the hill a bit, you can look back on ruins built in its shelter. I was told later that this is the location for one of the oldest known settlements in Spain.

Eventually you're at top and heading down the other side but annoyingly in a westerly direction. This is not a route that takes the shortest point between "a" and "b". Half way down the valley your underneath the ruins of castle, a castle which was hinted at when you're in Portilla but which is now clearly visible.

The day's really impressive castle comes 40 minutes later at Ocio. On a bend in the valley and high up on rock with visibility in all directions sits a perfectly located and largely intact little castle. Great location but what I really wanted was a cup of coffee which for some mad reason I had set my heart on.

After the next village, Berganzo, the route disappeared into trees in a valley from which it emerged only occasionally for the rest of the day. Nice beech trees but not yet showing any real signs of spring. 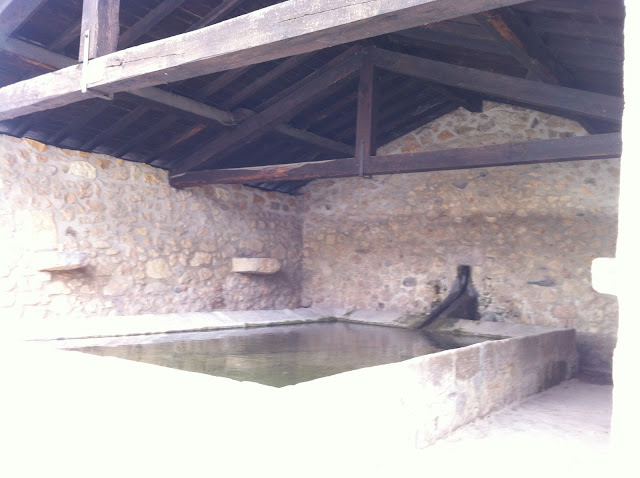 The route pops out of the trees to visit the little village of Payueta (with its ancient communal laundry) and Penacerrada which has an interesting ethnographic museum and whose defensive walls are being carefully restored. The bakery in the mill on the way into town was shut so I wasn't able to sample the cakes Juan had promised. 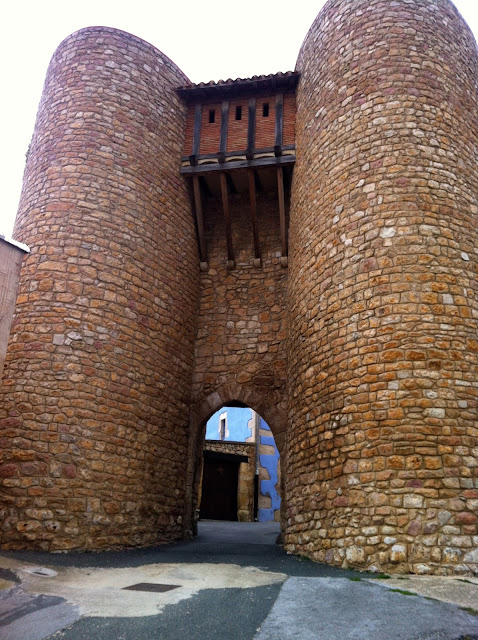 By the time I got to Pipaon, the next village in a gap between the trees (nice Romanesque church), it was clear that the walk was just a few kilometres longer than I had anticipated and that I was getting a bit late for my rendezvous with Aritz Ibañez in Lagran. A shame because I had to rush the last bit of the walk which was definitely one of the best bits of the day. The route was not quite out of the trees but enjoyed great views of a ridge of mountains to the south.

Aritz Ibañez is a local mountain guide and a great host. Tonight I am sleeping in a council owned refuge in a slightly remote location on the outside of the village. I had a meal with
Aritz in a busy local bar (the women's football team had just arrived) and we talked about all sorts of things including what makes the Basque country and the Basque people different. Aritz is working with others in the area to build up the services needed to exploit its obvious potential for all sorts of adventure travel.

To be honest I've been just a bit uncertain as to whether or not I was actually in the Basque country. The Basque flag (which looks like the Union flag but with different colours) and courts associated with the Basque wall game pelota, have featured in the villages for the last few days. It turns out that I have "crossed the boundary" but that the route crosses it both ways several times.

If you want to see where I have been please go to the following link
- Posted using BlogPress from my iPhone
Posted by John Hayes at 6:01 PM