Today was the big one, a massive 1600m climb up the Ooty Hill including 36 hairpin bends. The biggest hill I've cycled up before this was Ditchling Beacon on the South Downs and I found that tough.  Ooty Hill was more than 15 times higher so this was definitely a new experience for both Christine and myself.

It was cold at 7.30am when we left Wildhaven and although the sun was just breaking over the mountain the valley was in shade.  Annoyingly we had to descend before starting the climb.  Christine had managed to fall off her bike in some deep sand near the hotel and now wanted to brush herself off before starting the climb.  Everyone shot past us and we had the road to ourselves as we set off.
After struggling up the hill for about 20 minutes we arrived at a sharp bend and a sign says this is the 36th hairpin bend - only another 35 to go.

To be honest, it was a slog.  There is a minimum speed you have to go at to keep stable and sustaining this was hard work.  Fortunately the route took us up the shady side of the mountain. If we had been in full sun I think the climb would have been impossible.

Christine and I adopted at zero pit stop strategy, as the thought of starting again after a stop seemed worse than just going on. This worked well until I managed to convince myself, despite all the evidence to the contrary, that we were nearly at the top.  We rounded at hairpin bend (number 11?) to be confronted by a long straight ascent in the blazing sun.  This was definitely a 'low point' in terms of our morale, and we got off the bikes and walked a few metres.

Fortunately our despair didn't last long and we were soon on our way again.  Groups of women sitting on the side of the road seemed to find our efforts interesting and some offered shouts of encouragement (well that was my interpretation).

At the top there was a little pass and we joined 4 others who had already made it (although as Christine pointed out, who is not competitive, they started before us).  I was incredibly hungry and the nearby cafe was serving a delicious coconut cake - two massive slices later I was feeling a lot better.

We still had to get to Ooty, and after such a big climb 16km along an undulating road wasn't quite what the doctor ordered.  It was, however a beautiful upland ride through the Niligiri Mountains, a lovingly tendered landscape of terraces and tea plantations.
Eventually we arrived at Ooty, a British empire hill station which is now a popular tourist destination for Indians and very busy. The hotel we stayed in was seriously plush (Christine treated herself to a 90 minute full body massage) and, by Indian terms, expensive.
While Christine was having her rub down I got a taxi down to Coonoor for a ride on the Niligiri Mountain Railway.  I haven't got the memory to be a fully fledged train spotter but I can see the attraction.  The railway is part of a UNESCO world heritage feature known as Indian Mountain Railways which includes the more famous Darjeeling Line.  Trains are steam powered Swiss diesel burning steam trains - up to Coonoor (whose lovely blue station was featured in David Lean's film 'Passage to India'), where a diesel engine takes over for the stretch up to Ooty. Our little party decided not to travel 1st class (70 rupees - approximately 70p) and instead went standard class (5 rupees).  These economics, and the fact that every station has at least 4 officials waving a flag, possibly explains why 2014 is the last year that the train will run up the mountain.  Very sad because it's a great trip. 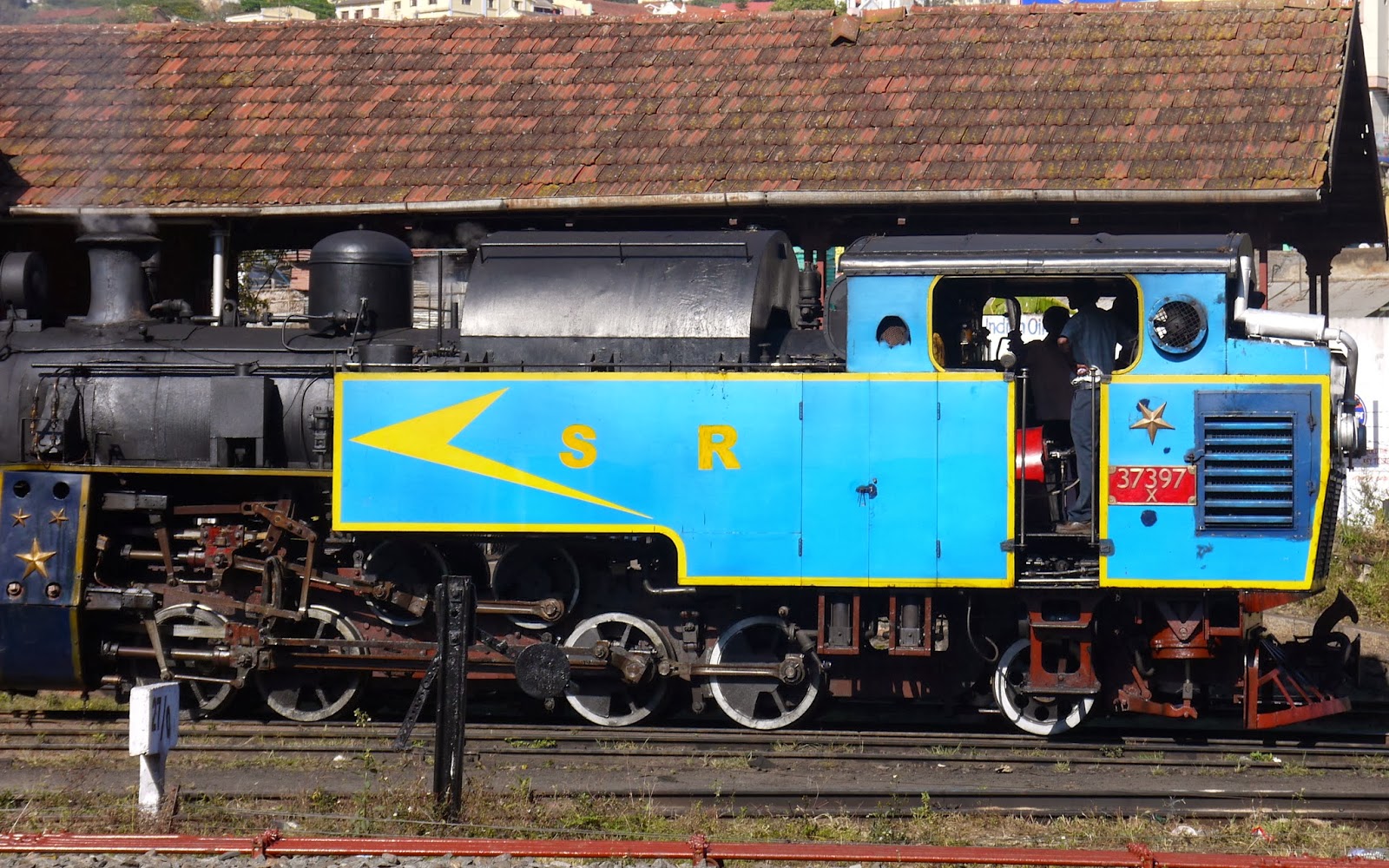 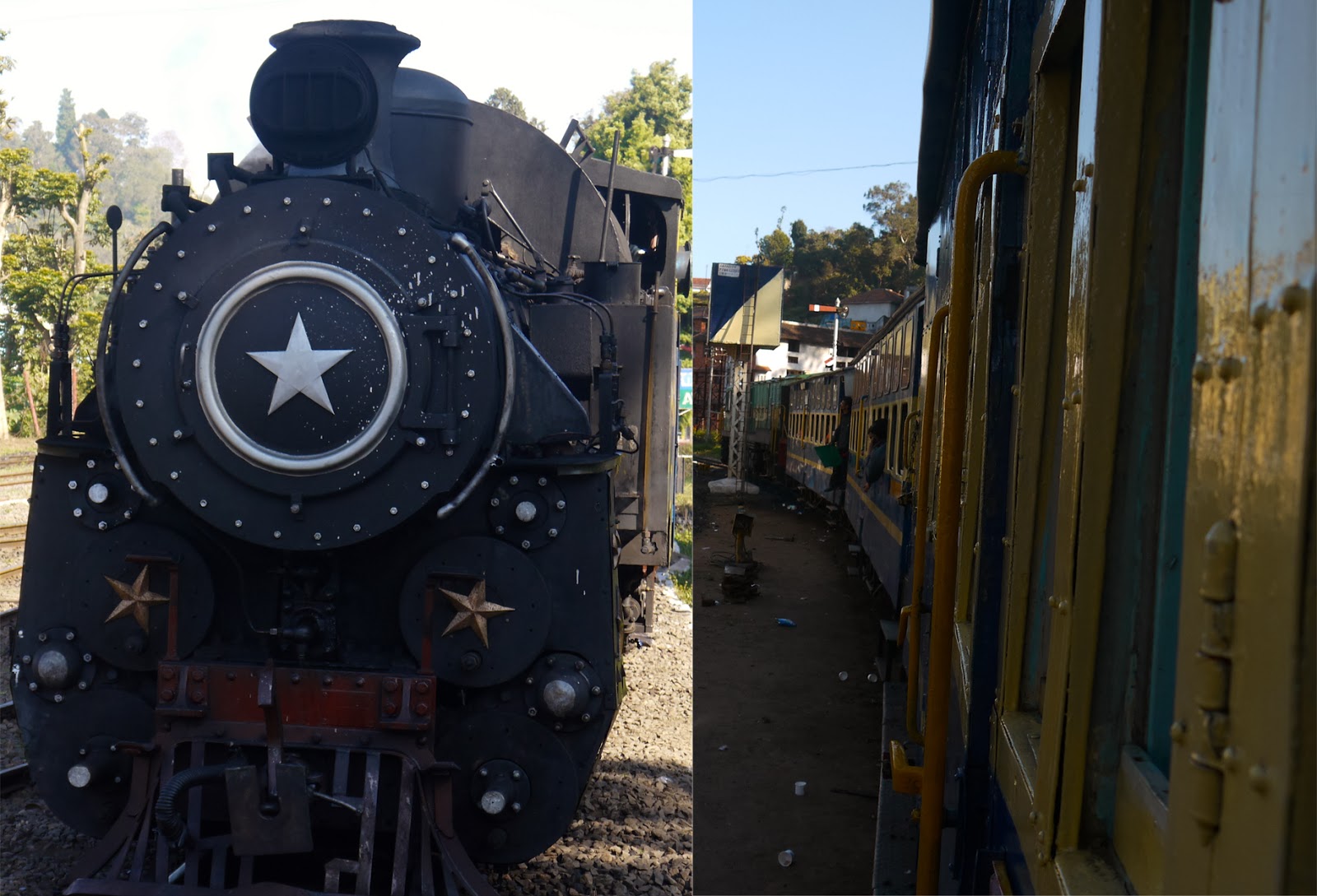